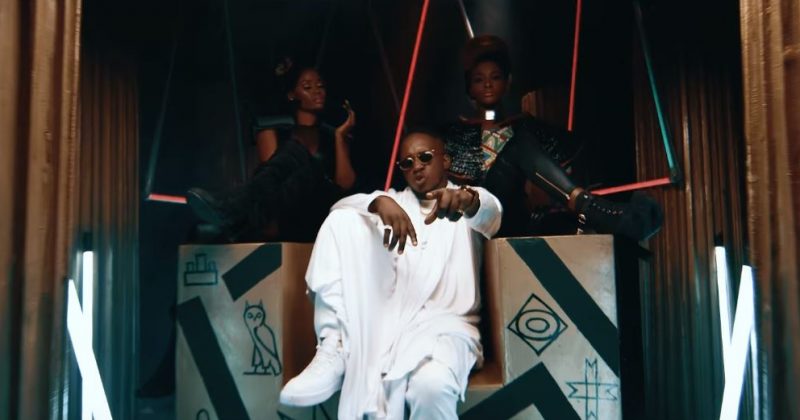 It’s always fascinating to see how the classic indigenous genres have survived in today’s heavily western-influenced era of pop music in Africa. Fela’s Afrobeat remains relevant through his immortalized legacy prompting his samples on contemporary songs from across the world. But for Apala music, Terry Apala’s fusion of trap with the traditional genre means Apala music will live on for at least another few years. His latest single, “Palongo” brings his cultural influences into the limelight with the feature of Haruna Wusiliu Ishola and a video referencing the dance tropes from his era. Duets bring out the best in most artists, but there’s something special about it when the collaboration is between a veteran and a newbie. Both share a chemistry on the song reminding everyone Apala is also one of good places to turn for good Nigerian music.

Released back in April, Joey Bada$$’s ALL-AMERIKKKAN BADA$$ peaked at No. 5 on the Billboard 200 and is Joey’s highest-charting project to date. The Brooklyn raised rapper’s critical and mass appeal has continued to grow exponentially since his debut with 1999 and for his feature on BBC Radio 1’s “Piano Series”, he paid tribute to New York’s rap icons; Jay Z and Nas. Backed by Dave who provides the piano-rendition of “Dead Presidents” off Jay Z’s Reasonable Doubt tape, Joey Bad$$ mashes-up his verse from “Amerikkkan Idol” with hook pulled from Nas’ “The World Is Yours”. The combination of the three highlights the vibrant hip-hop culture in New York as he continues in the conscious light of the greats before him speaking on social justice and the lack of it.

M.I – You Rappers Should Fix Up Your Lives

Say what you will about Mr Incredible’s “YRSFUYL”, but it got the attention he wanted. He might not be in the best position to criticize anyone for compromising lyrical content for commercial credibility but “You Rappers Need To Fix Up Your Lives” proves M.I still knows how to keep Hip-hop in popular conversation; even if he has to throw himself under the bus in the process. Rapping “I’m Doing This For The Culture” leaves room for the possibility of this parody premise yet it still inspired reactions from hip-hop heads in Nigeria. Vader, the most recent winner of the Hennessy Artistry among others (Dremo would rather you “Fix Up Your Bank Account”) have replied MI’s cry for attention. And in case you missed it, the recently released video directed by Clarence Peters emphasises MI’s pseudo-emeritus narrative with imageries of resurrection.

Drake’s verse on “Versace” may have put Migos on the map, but their debut album has seen the trio grow to become international sensations. The album’s world tour brought them to Nigeria late last year where they also shot the video for “Call Casting”. South African also got to experience the “Bad and Boujee” hit makers this month with the two-legged event in Durban and Johannesburg but while the show was highly anticipated by fans, the Ticket Dome in Johannesburg had delay hiccups. The Durban concert at the International Convention Centre, however, sold out and made up for it with performance by Nasty C and Riky Rick and other South African rappers.

Since breaking big with his career-defining “Irapada 2.0” Junior Boy has gotten the type of acceptance that advanced him from curiosity to superstar. His latest single, “My Prayer” attempts to remind show everyone he’s not just another one hit wonder with his catchy and repetitive flow over the mid-tempo beat Phantom produces. Continuing with his fame seeking narrative, he is logging a follow-up to galvanize the listener base at retail. But while “Irapada 2.0” featured 9ice and had more chemistry and fun, “My Prayer” is more sincere and prayerful. The recently released video that Unlimited LA’s directs accentuates this through religious symbols and a all together serene ambience.

After bringing the “Silence”, Marshmallow and Khalid get loud and bring light to the darkness in their music video. Khalid’s somber vocals are reflected through the several shots of despair that show the harsh realities suffered around the world; argumentative disputes, eviction letters, and confrontations with police. But the uplifting EDM harmonies shed some light to dark realities with the colorful visuals and aesthetically satisfying neon colors.

ICYMI: Check out our roundup of videos from Nigerian pop culture this October

Next Article Not.Nilc turns to some good ol’ slut shaming on “Is You A Hoe”