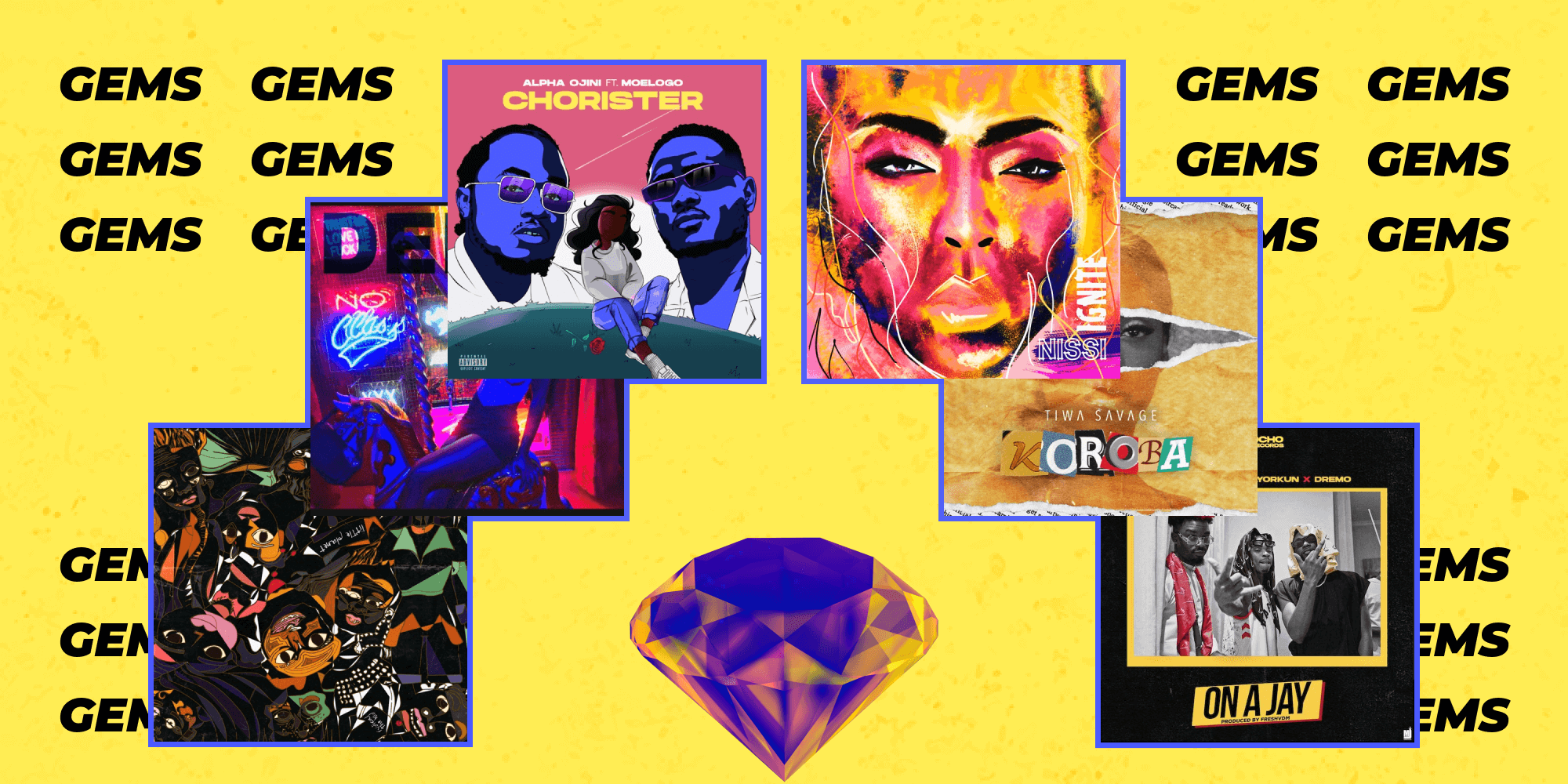 With The Scope Widening And Music Dropping At An Immeasurable Pace, It’s Easy To Miss Out On A Lot Of New Drops, So We’ve Decided To Help Out, By Collating A List Of The Best Hip-Hop, Pop, R&B Song From All Over The Continent. Our Main Goal With This List Is To Make Finding Great Music Of The Moment Easier For You.

Afropop’s bad girl Tiwa Savage is preparing for the release of her third studio album, ‘CELIA’, which fans are impatiently waiting to receive seeing as it’s been four years since her last body of work. To whet our appetites, Savage first released the delectable number “Dangerous Love” a few weeks back and has now released the insanely catchy single, “Koroba” – first teased on social media, after Tiwa Savage started off a viral dance challenge for the number.

On “Koroba”, Savage questions the misogyny and slut-shaming innate in the Nigerian society, which dictates that if a woman is successful it is usually because she is connected to rich men, either through family or through sexual intercourse. Over the catchy beat produced by London, she sings ‘If I follow politician, you go hear am for paper/them go call am prostitution’ inviting listeners to question their misogynistic and demeaning biases when it comes to women. Tiwa Savage is unbothered by respectability politics and stresses the need for women to enjoy their lives to the fullest without shame.

While we love that Savage is delving into the checkered past of slut-shaming in Nigeria, we can’t help but notice the privilege that seeps into her lyrics. ‘Who no like enjoyment?/If money dey for pocket, shebi na national budget o?’ she sings on the song’s first verse, using the same breath used to dismantle the patriarchy to peddle to harmful ideals that claim it’s okay to spend money from the government, money that we’re well aware should be in the hands of the people. Given the current climate with the global health pandemic and worldwide economic issues, Savage failed to read the room. Despite this, enjoy weekend with the catchy and danceable ambiance on “Koroba”.

It’s a monumental time for women in rap. We can’t explain the euphoric feeling we get from seeing rappers like Cardi B and Megan thee Stallion at the top of the charts, as they talk heir shit and reclaim the derogatory terms that once marred women from speaking freely about their sexuality. In line with this, newcomer DEELA is tossing her hat in the ring with her impressive debut self-titled EP where she shows off her lyrical chops and knack for spitting some hard-hitting facts.

DEELA may be a newcomer but we’re already converted to her brand of snappy raps. “Not Me” is a nasty-ass rap bop that sees DEELA kicking off with a forceful punch as she wags a scathing middle finger at men who think they have her figured out. ‘You don’t know me, you know my Instagram/that’s two different things please h*e goddamn’ she raps, sending a warning to the naysayers and trolls who conflate social media ‘Following’ with close proximity to a person. It’s hard to imagine a scenario where you could stomach the guilt of trying to bullshit her because it’s clear that DEELA is ready to bring the smoke at any given moment (“I’ll land a slap on your face just for free”). From her profane boasts and sharp, clear raps, DEELA has a lot more to say and from her first attempt at a body of work, we’re ecstatically waiting to hear what she cooks up next.

On his excellent sophomore album, ‘Chvmeleon’, Alpha Ojini proved beyond a doubt that he’s one of the more dynamic rap artists around, displaying his adeptness at technical lyricism and mass appeal-intended pop-rap songs without either side sounding forced. For his first single this year, “POP II”, Alpha enlisted six of his rap colleagues for a posse cut that put their hard-hitting bars centre stage. Pulling a 180, his follow-up single, “Chorister” is a summery earworm with an apt assist from singer Moelogo.

Across his two albums, Alpha Ojini has delivered love songs with varying shades of tension, however “Chorister” is planted in the territory where instant attraction meets infatuation – it’s a common theme in afropop, but the execution here is top notch. Comparing the effects of his love interest’s body on him to fireworks going off, Alpha leans into R&B tropes on the remarkable chorus, leaning into his adequate singing voice and bright melodies to ensure his sweet nothings come off as charming advances rather than creepy attempts. While Alpha briefly reverts into rapping more sweet nothings on the second verse, Moelogo handles the stellar first verse, which follows Alpha’s chorus, serenading in his trademark rustic falsetto over Alpha’s self-produced maximalist combo of electric piano riffs, gurgling bass guitar and thudding bass.

Nissi’s music prioritises positivity. Last week, the singer dropped her debut EP, ‘IGNITE’, a 7-song set that prescribes constantly seeking and radiating happiness even when situations seem to dictate otherwise. “I may see more lows than I do highs/I won’t let the good pass me by”, she resolutely sings on the penultimate track “HOLIDAY”, a song that epitomises Nissi’s ideal of making music listeners can live with.

Similar to the rest of the project, Nissi’s vibrant voice and flair for robust melodies strides confidently over boisterous production, but a big part of what makes “HOLIDAY” a standout selection is how nostalgia is turned on its head for a refreshing banger. Although there are echoes of EDM, the defining music elements of the song – funk guitar riffs and drums with an old school swing – are pulled from Nigerian disco of the ‘80s. Rather than invoking any of the long list of divas from that era, Nissi simply winks at their legacy of classics by imbuing her own song with an infectious attitude and a message that will resonate for long a time.

Much like the space travel OG NASA is known for, this collaboration between Amaarae and Benin producer, Rvdical the Kid is an adventurous exploration of their two creatively crafty worlds – you really don’t know what you’re going to find on your travels with “NASA”, apart from the certainty that Amaarae will kill it as she always does. Other familiar traits of the Ghanaian rapper present on this number are her confidence, her sex appeal, her confidence in her sex appeal (which she encourages us to tap into, “call up the coroner, somebody tell ‘em you killin’ it”), and of course her boast-worthy ability to finesse – whether it’s n*ggas or a whip, you can count on Amaarae to get hers in the most effortless way possible.

Beyond her lyrics, Amaarae is a sonic delight on this tantalising Rvdical the Kid production. Opening with her signature high pitch over the light bounce, once Rvdical’s beat drops into its multiple elements, Amaarae matches the spectacularly unpredictable energy ricocheting between flows, switching gears as quickly as deftly as Rvdical plays with different production tactics. One of the highlights of this collaboration comes in at about the minute mark, where Rvdical the Kid distorts Amaarae’s vocals, contrasting her preference for the upper registers with a low pitch compression. With Amaarae fading out a little after two minutes, Rvdical takes a well-earned minute and a half to flaunt his production penchant, giving us a proper peak into the intricacies of the infectious beat that accompanied Amaarae’s top tier performance. Keeping us entertained right to the end, Rvdical the Kid ends our journey through space on the planet of the Chop and the Screw, parking “NASA” firmly in the hall of fame of epic producer ft. artist collaborations.

Afropop has one golden rule it requires of listeners, get dancing. It’s an easy request to make when you draw influences from dancehall and EDM, as The Kazez do so flawlessly. Taking things a step further on their latest single, “Jericho” The Kazez set their dramatic tale of romance on the dancefloor, offering dance instructions in their lyrics; “gbe idi yen duro/ ki idi yen wulo(shake that ass)”.

Many songs have made similar requests of listeners but “Jericho” makes a more compelling case with the gleaming beats suited for the nightclub and the captivating narrative devoted to partying. The Kazez duo’s lyrics encourage listeners to get into the groove – confessing their attraction to their muses’ dancing and making promises to win their affection – whilst P.Priiime produces a joyous and catchy beat, mixing upbeat drum riffs, synths, percussion harmonies and an EDM beat drop that drives home the song’s groovy allure. Resisting the urge to dance  to “Jericho” is unthinkable.

Music collectives can take advantage of the strength in their numbers and turn every song into a party. Performing with familiar collaborators seems to put that extra bounce in songs, and though Flowolf isn’t a member of any music crew, he has long been affiliated with Davido’s DMW gang. He featured on “Mafa Mafa”, the last official single from the music outfit and he’s now featuring DMW members, Mayorkun and Dremo for his new single, “On A Jay”.

“On A Jay” narrates the challenges that come with the celebrity lifestyle of artists. Flowolf is finally getting media mainstream since his 2017 debut, “Playback” featuring Davido and Dremo, and now he’s seeking the council of his colleagues, Mayorkun and Dremo who have experience dealing with being in the limelight. All three artists flex their songwriting skills and capitalise on the casual chemistry they’ve developed from being friends as they deliver conversational lyrics and flows, replying questions and finishing each other’s sentences.

ICYMI: HOW TO: A GUIDE TO AFRICA’S MOST POPULAR DANCE MOVES FROM THE 2010S