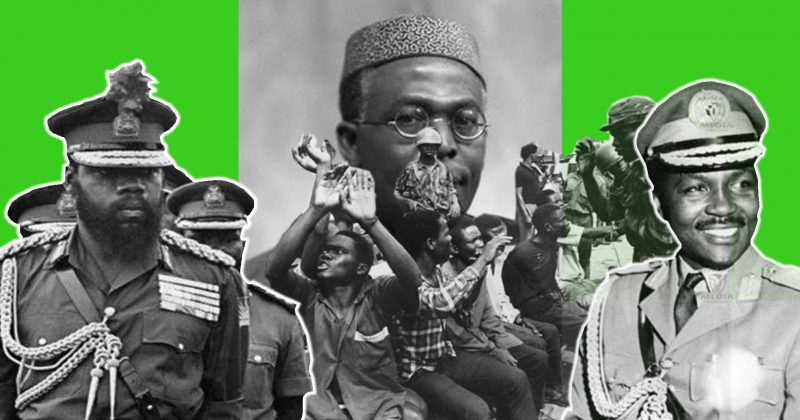 Nigeria’s Civil War: Teaching The Lesson, To Unite A Nation

All wars are awful, but civil wars are regarded as the worst kind, as they turn brothers into enemies and force civilians to choose sides. January the 15th marked not only the anniversary of the first military coup in Nigeria’s history but also the beginning of her bloody civil war a year later. Though these two chapters have had a tremendous impact on the course of Nigeria’s history, they are shrouded in the most secrecy and conspiracy.

One startling aspect of Nigeria’s civil war, is the glaring difference in the accounts among the different people from the various regions of Nigeria, which is further exacerbated by the fact that there is no official account of the events of the war.

On the morning of January 15th 1966, a coup led by Major Chukwuma Kaduna Nzeogwu and Emmanuel Ifeajuna would eliminate several senior officials of the then parliamentary government, despite maintaining that the coup was for the good of all Nigerians. The loss of major political figures particularly from the north cultivated a perception that the coup was orchestrated to only serve the interest of the Igbos.

Nigeria was witnessing its first power struggle as an independent nation. Months of civic unrest lead to worsening economic situations, following the controversial 1965 parliamentary elections, which birthed the geo-tribal fault lines between the 4 regions of the country and their corresponding ‘dominant tribes’. This is a trait that has continued to characterise politicking in Nigeria, even today. Numerical discrepancies between the voter numbers and census returns, resulted in a boycott of the election by the UPGA party in the eastern region. The resulting election was marred with reports of ballot stuffing and irregularities.

Following Nzeogwu’s coup, Nigeria’s acting president Nwafor Orizu (Nnamdi Azikiwe was not in Nigeria at the time) announced a voluntary decision by the cabinet to transfer power to Nigeria’s armed forces. As a result, Major General Aguiyi Ironsi was installed as head of state, setting the precedence of military takeovers that would mark most of the political development of Nigeria, till the very end of the 20th century.

As interim commander-in-chief, Ironsi sought to return calm to the country, but failed to punish the coup plotters. Following a counter coup in July, Yakubu Gowon would assume power, and from June to October of 1966, riots in the northern region of Nigeria would leave thousands of Igbos dead, and forcing up to a million to return to the eastern region of the country. The federal government’s response to the crisis was slow and failed to quell the loss of life. On May 30th 1967, Odumegwu Ojukwu  would declare the eastern region a sovereign republic named ‘Biafra’. War would break shortly after in July following failed peace talks in Aburi Ghana. An estimated 2 million civilians, mostly of Igbo origin were lost as a result of the conflict, with many more displaced.

Following the war, Yakubu Gowon decreed ‘No victor, No vanquished’, a mindset aimed at quickly moving past the harrowing memories of the war, and reintegrating Igbos and the eastern part of Nigeria. Despite this mantra, the reality of returning back to Nigeria was far from resuming the norm, as most Igbos lost possession of their property in other parts of Nigeria (receiving only a 20 pound compensation), and continued to face stigma as a result of their ethnic identity.

The war, and the divisions it caused in its wake are not simply repairable by ignoring the past. Secrecy only serves as a breeding ground of festered wounds, and when proper context is not provided for such heavy and important national events, the emotion and resentment can be manipulated by vested interests, spawning more problems and serving to deepen already strained ties amongst the ethnicities in Nigeria.

Embracing the past is a concrete step towards achieving closure and ensuring that the same mistakes are not repeated. A country like Rwanda has since its own brutal civil war acknowledged and integrated the memory of the war into its national consciousness, ensuring that all her citizens understand the price of war, and know exactly what lead to the sad turn of events. It would be very hard for an individual to manipulate the sentiment around the war for personal gain, as the clarity of history would be too glaring to overlook.

Despite the devastating effects of the war on both sides, with atrocities committed towards ethnic Igbos since the war continue to form the backbone of the economic and socio-political development in Nigeria, owing to their dexterity and resilience. It is my hope that we reach a point in Nigeria where we can openly discuss the ills in our society, with a mindset of finding sustainable solutions, and further entrenching our nation’s unity.

Nigeria’s Civil war is instructional material for future generations, and its inclusion as a compulsory part of the national curriculum will help future generations appreciate the sacrifices and diversity that has brought this country so far. It is of no use protecting the memories of our fallen heroes if we do not tell their stories, honestly and completely, and make sure that the unity fought for is further entrenched by carrying every section of the country along.

It is unfortunate that the killings could not have been prevented, and the paranoia around power and control prevented us from setting aside our differences to sight a unified vision, however it would be a disservice to the memories of those affected by the war, dead and many still alive, to not acknowledge and learn about our trials as a nation, in order to build a safer and more united society for future generations to develop in.

Watch ‘No Victors’, A docu-series about the effects of the civil war

Next Article Rap Song of the Week: Martyn’s “Can’t Get No Sleep” is the sound of an artist on a mission