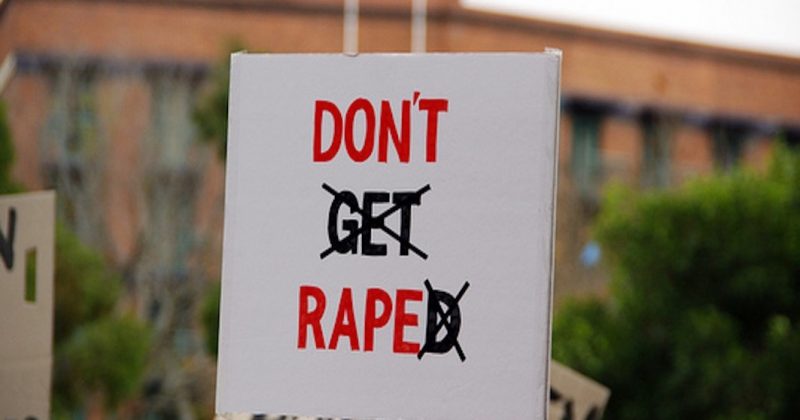 While global society has been fighting to dismantle harmful beliefs and behaviour which enables rape culture, Africa as a whole has only started to catch up and we seem to be decades behind the rest of the world. In light of the fact that we have lawmakers who still believe that women should dress ‘appropriately’ to avoid sexual assault since ‘men are not wood’, and policemen who when a case is brought to them think it’s appropriate to ask a traumatised 18-year-old whether she enjoyed her assault, we have a lot more than we think to dismantle.

If you’ve been paying attention to social media over the past few days, you’ll see that something doesn’t quite sit right. With reports of several women being killed at the mercy of police brutality and mostly sexual violence, we’ve reached a tipping point where the dark underbelly of societal ills are now being exposed. Unfortunately, the consequence of this has been the loss of precious lives to society’s negligence of what women have been fighting against for most of my life. Given this, it’s clear that we’ve reached a time of reckoning and there’s a huge demand for change. To do our fair bit for our community, The NATIVE will be joining The Consent Workshop in their ongoing campaign, 21 Days Of Consent, to produce a 5-part series. Each piece will be dedicated to dismantling different facets of rape culture and how the music industry as a whole contributes to this from the actual music to the structures in place.

We all have a part to play when it comes to dismantling rape culture. Here are some steps to take in achieving so #tcw21daysofconsent

Back in April, after several whispers, we learnt horrid details of Brymo’s alleged assault of an unassuming fan, amidst a swarm of women coming forward to boldly name and shame their abusers. Since then, there seem to be no consequences for the singer, and he’s resorted to threatening his accuser with the law, whilst relying on the support of fans and tweeting incendiary things such as “silence is always consent”. As recently as last night, we learnt about how talent manager, Mayowa Balogun recorded his partner during sex without her consent and also proceeded to announce this encounter to Twitter (in form of an apology) without speaking to her about it first. From the varying nature of each of these cases to the responses in favour of the accused men, we’ve spent the past week confirming something we already knew: the music industry and society as a whole has a big issue with their attitudes towards women.

In the past week alone, we’ve heard of accusations made against artists and others in the music and entertainment industries such as Peruzzi, D’banj, Comedian Ebiye and Mayowa Balogun. Peruzzi’s 2020 began with accusations by Daffy Blanco, who in January, said he had defrauded her of 15 million Naira and also tried to force himself on her. As usual, this accusation went away as quickly as it came, and we never heard anything about it after a while. Last week, however, another allegation was made against Peruzzi, this time with a detailed description and voice recording of what allegedly transpired between them.

In her Twitter thread, Jayamah22 went into great detail about how he forced himself on her after she had repeatedly rejected his advances. Although the singer/songwriter emphatically denied these claims in a statement and also via several tweets, a slew of older tweets from him are indicative of his (and society’s) attitudes towards women and their autonomy, making a case for how these attitudes have led to the tipping point we’re at today.

In Peruzzi’s tweets, he says overtly (and around the same time of his alleged act) that if a woman does not agree to his advances, then he will forcibly have sex with her. In his statement, however, Peruzzi admits that his tweets were irresponsible and that because he was younger, didn’t realise the gravity of the things he was saying. Similarly, Mayowa Balogun in his address, relied on the fact that he wasn’t aware that his behaviour was problematic, even though it has only been over the course of two years. Given that sexual assault is not a new thing, it’s a bit curious that people generally don’t realise the gravity of making distasteful jokes about sexual assault, and this is where society has failed, mostly to the detriment of women. Worldwide, thanks to the patriarchal structure of our society, attitudes towards sexual relations between men and women have the effect of trivialising or normalising sexual assault and harassment.

People tend to think that unless it escalates to the point of the penetration, then ‘it’s not that deep’, however, the rationale behind tweets such as Peruzzi’s –which is basically that a woman does not get the choice – are a big part of the problem. Similarly to the account shared by Brymo’s accuser, what’s clear and common, is that these men have prioritised their own sexual urges over the autonomy of their (possible) partner’s. Where people might see a grey area thanks to these societal structures, we are (and have been) saying that it is assault. This is a direct result of the patriarchal culture which teaches that sex is something a woman gives to a man for him to take or enjoy and in these (alleged) cases, they were both denied something society taught to believe is theirs to take.

FROM THE BOTTOM OF MY HEART MY PEOPLE, I AM SORRY🌹

In addition, our society’s disingenuous teachings about sexual relations are deeply rooted in traditional and religious norms. Therefore, sex is treated as a taboo topic and many of us would have only been taught that we shouldn’t do it more than anything else. In many homes, parents fail to teach their sons about consent – based on the assumption that they shouldn’t be doing it anyway – whilst teaching and impressing upon their daughters the importance of avoiding trouble. When these things then do happen, there’s an ingrained culture of victim shaming and blaming, since the order of the day is that women should avoid trouble rather that men shouldn’t be doing these things in the first place. By getting into this trouble (even through no fault of her own), she has essentially stepped out of the line society has marked out for her, and the focus is then shifted to this rather than the consequence for the actual abuser.

Knowing that they are not as protected as they should be, victims and survivors often remain quiet, afraid of the consequences they will face. In the thick of things last week, Comedian Ebiye’s ex-girlfriend came forward and recounted details of the physical and sexual abuse she endured during the course of their relationship. Whilst it was chilling to read the comedian’s deplorable acts, what was more upsetting was her account of his confidence that there would be no consequences of his actions, because of his loyal fanbase.

With the knowledge of the cushioning they have, thanks to their privilege, perpetrators typically have a lot of confidence that they can get away with assault. When women make allegations against prominent figures in society, people come out in droves in support of their faves, whilst silencing the women they have allegedly abused. By questioning the legitimacy of a person’s account, what they’re doing, is making the public (who already have dangerous views towards sexual assault) less empathetic towards these women who have come forward. Given how much has already been discussed, it’s fair to say that these people know exactly what they are doing.

As it is, while Ebiye’s ex-girlfriend feels liberated for sharing her story, she also feels unsafe – she doesn’t believe her parents will be understanding if they were to find out, and she also believes that she could be harmed by people connected to the comedian. These fears mirror and confirm what most people in her position feel, and this should be enough indication that something ain’t right.

The unravelling of events this week has brought to light the fact that we cannot continue to be complacent in hoping that things will change without ensuring change is implemented. While we can all contribute in our own little ways to continue working towards building a community that prizes fairness and social justice, we must also disrupt and dismantle to ensure that all are treated with dignity and respect. In our next part of this series, we will be discussing how songs and their lyrics often enable harmful behaviours.

ICYMI: How to use your male privilege to be a better ally in the fight against gender-based violence

Next Article Stream Ictooicy’s most adventurous project yet, ‘Lavish’