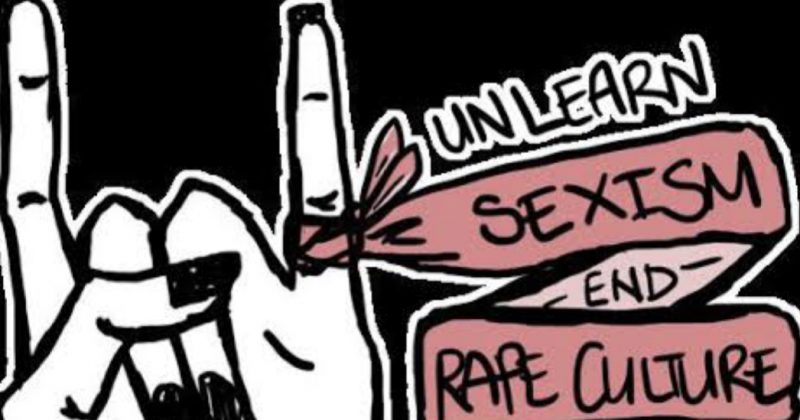 This past weekend, we all witnessed something truly unique and despicable: An accused person providing evidence of his predatory role in a rape accusation, under the guise of exoneration. Apart from this, what was really heart-wrenching, was that a significant amount of people bought into the conceit behind his story, and sadly reaffirmed the staunchly ridiculous ideals that prevail in our society when it comes to sexual abuse issues.

Usually, when victims of sexual assault name and shame their abusers in disturbing detail, the alleged perpetrators take cover under the pretext of “innocent until proven guilty”, either waiting out the outrage until everything is swept under the rug or responding with (empty) threats of legal actions. This is all while counting on the support of a society who condones their alleged behaviour, over the wellbeing of the people they have caused great harm to. In the case of Tife Fabunmi – a young Nigerian corper and talent manager (according to his twitter bio) who was accused of rape by his ex-girlfriend – he relied on that same support while pushing the ledger for the audacious lengths accused people can go to in order to clear their name.

In a Twitter thread narrating the events and aftermath of the sexual encounter, the bombshell is a series of chat screenshots where he admits to noticing the pain on his ex-partner’s face and hearing her cries for him to stop, however, he still kept going because she didn’t physically push him off. Like clockwork, there was—and there still is—an overwhelming amount of support in favour of the abuser. As disappointing, disorienting and disheartening as it is, this reaction isn’t unexpected, it’s what you get with a mix of purity culture, misunderstanding of basic sexual consent, and the general lack of care for women in society.

and I foolishly fell for it. Here is the Chat: pic.twitter.com/YfPikyPjzT

Due to the deeply patriarchal nature of our society, sexual abuse and harassment, which should be black-and-white issues, are often treated with a heightened level of obnoxiousness and scepticism towards victims, simply because the perpetrators are more often than not, men. In a society which demands that men dominate the order of the day, coupled with the widespread idea that sex is an activity a woman participates in and a man takes pleasure from, it’s not that hard to see the foundation of rape culture in Nigeria—and generally, Africa.

Built on that foundation, is the disgusting dynamic between entitlement and shame, where one gender can be flagrant about what they do in pursuit of and also during and after sex, while the other gender is expected to be sexually timid and submissive or face derogation. It’s important to be aware of this relationship because it plays a key role in male support and female shaming whenever there are any sex-related allegations. In the aforementioned case, it’s absolutely shameful in 2020, and also telling that the lady has been ridiculed for travelling between states and engaging in ‘pre-marital’ sex, amongst other things.

It’s also worth noting that unlike other popular figures who have recently been accused of sexual assault, the guy in question is being supported simply because our society only values the truth when it’s interpreted through the archetypal male lens, at the expense of those who have been offended. To cap off this unevenness, a lot of men are – or pretend to be – oblivious of this advantage, and refuse to add any positive value in the quest to overturn the culture of enabling and victim shaming.

Uwa's story breaks me. We all have to admit that our parents have failed woefully in the raising of the male child. Concentrating too much on the conduct of the female child when it's actually the males who have the higher propensity to do evil! #JusticeForUwa

A notable instance of this ignorance is the now popular saying, “not all men”, a needless and aggravating rhetoric which tries to absolve guilt, but only ends up distracting from the conversations around forward motion for gender-based violence. It is quite odd that in a society where women are often looked at as representatives of their gender rather than individual people, men often baulk at being defined by the atrocious crimes perpetrated by their fellow men.

As much as many men don’t want to be saddled with the casual cruelty that’s associated with our gender, what’s far more pertinent, is that men NEED to be better invested in changing a culture which enables their role in sexual assault and harassment without consequences. This is in a bid not just to change perception, but most importantly because it’s a human rights issue we should all be deeply concerned about.

If the first step is becoming aware of our privilege, the next is to unlearn and relearn. Due to the way we were raised and what we were (not) taught, many of us have imbibed ideals about sex and communicating with women in a way that’s harmful and degrading to ONLY women. A dedication to swapping mindsets for the better is important to realise that something as seemingly trivial as catcalling is fundamentally wrong, and sexual consent is far simpler than it is complex.

Need a refresher on consent?

Beyond its personal effects, unlearning and relearning trickles down into how we interact with friends and those around us when related conversations come up. While broader social media platforms make it difficult to put these ideals into proper context, discussions in more intimate spaces affords an avenue to educate friends and change any harmful stances they might harbour. In knowing better and helping those around us to know better, it creates a ripple effect which increases awareness and ensures that men are more intelligible and empathetic when it comes to cases of sexual violence.

In recent years, the current generation of young Nigerian women have shown that they will not be tolerating sexual assault and harassment. They have been protesting, assisting victims and finding ways to tackle these issues in a country where the law seems geared toward protecting offenders. Nigerian men need to become a bigger part of this fight, and not be the centre of it. Unravelling the societal constructs which enable our gender to do horrid and downright unspeakable things to women will only go faster with the addition of our efforts.

No woman deserves to be assaulted, harassed and widely shamed when they share their difficult stories. Getting that into our minds and the minds of others around us is when we’re creating a better place where men aren’t synonymous with danger. Until then, we should accept that change is a communal onus which belongs each and every one of us, and the work does not stop until these acts stop being a part of our societal fabric. It’s not enough to not be a perpetrator, we must also fight alongside women in order to create a safe world for them to just exist the way we do.