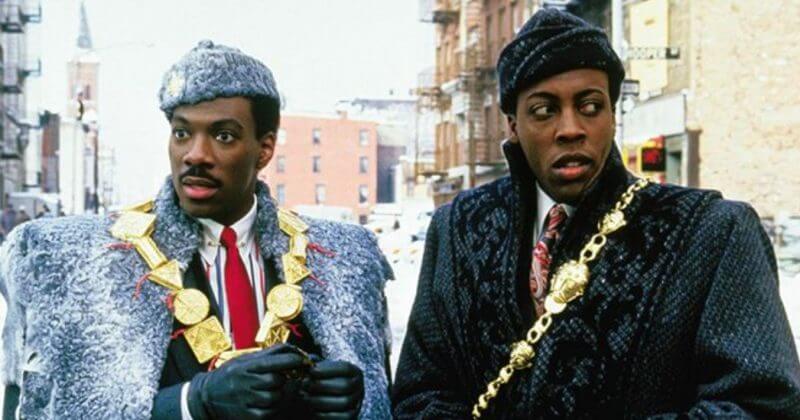 AV Club: How ‘Coming 2 America’ can portray an accurate view of Africa

Thirty years after his initial trip from Zamunda to Queens, New York, Prince Akeem (played by Eddie Murphy) is returning to screens this August – this time to claim an American heir. Rumours about the release of a sequel to Paramount’s 1988 Coming to America have been circulating for almost as long as his decades-long return trip to mythical Zamunda. But the highly-anticipated film is finally being released on streaming platform, Amazon Prime later this year. Following the trailer’s release yesterday, coincidentally positioned within America’s Black History Month, anticipations are high for Coming 2 America, however, the ongoing rollout has also been met with mixed reactions from audiences around the world.

On the one hand, the beloved 1988 film directed by John Landis was a huge success at the time of its release, earning over $128 million at box offices and a reported $300 million internationally. On the other hand, though, many expressed concerns that it portrayed a naïve, stock photo-version of Africa and as such, if the sequel was to be anything like the original, it would be unable to fly under the radar as it did three decades ago. Back then we had an anything goes attitude towards ignorant representations, but these days we are much more thoughtful of the way in which we depict cultures that aren’t our own. Especially as Black people around the world are unified in their struggle against racism and governmental subjugation, the appetite for derogatory, alienating media has fully dissolved.

There’s no denying that Coming 2 America will face hurdles to depict Africa accurately; the playful fairytale of Zamunda would not be appropriate to viewers in the 21st Century, particularly as it would need to connect with a new generation of African and African-Americans with more understanding of their roots. The original film was about the Black cultural experience after all, albeit one that was laced with elements of fantasy. But to understand why the film depicted Africa as a regal universe, replete with royal digs and vibrant sartorial choices, one would have to understand the America in which the film was released.

In 1988 America, everywhere was ripe with rebellion and anger. It was in the final year of Ronald Regan’s presidency and the same year that Hip-hop/Rap group N.W.A released their standout single “Straight Out of Compton”, the title track of their debut album. The song would forever be one of the most defining moments of Hip-Hop; many termed it “Gangsta Rap” at the time, but “Straight Out of Compton” was really a revolt against the drug epidemic, a racist government, the disparities in the criminal justice system, and mass incarceration. The song was released around the same time as Coming to America, and both surged widely among Black audiences who saw accurate representations of their place as people in 1988 America. Back then, it wasn’t cool to be African, and the wild depictions and exaggerations in the film portrayed this.

In a year where we’re seeing many beloved classics, such as Sex and the City, Gossip Girl, Blade, Clueless’and more, returning to screens for reboots and sequels, it’s worth questioning what place Coming 2 America would fit in today’s world. Although on the one hand, it would be yet another hour of entertaining Eddie Murphy magic, capable of providing some much-needed nostalgic content in these difficult, socially distanced times, if the sequel does not address the naivety of the original movie then it would be a loss of a real opportunity to culturally depict modern-day Africa, for what she really is.

In the original film, Africa was depicted as a homogenous monolith with no distinctions between the vast cultural landscape of people on the continent. Zamunda, like Wakanda after it, was created to be purely fictional, but their inability to connect with any African culture in any substantial way meant that there was creative license to be as incredulous as could possibly be, and that they were. There were elephants and giraffes stomping across the palace backyard, and even at times, Prince Hakeem would have to dumb himself down when speaking to the American characters to appear more African. Revisiting the original film will reveal instances such as the famous barbershop scenes where the typical jesting and roosting of customers takes place. But, here, one of the barbers referred derogatorily to Hakeem as ‘Kunta Kinte’, a fictional Gambian character sold into slavery in the 1977 film Roots.

In the sequel, not much seems to have changed. The barbershop is still a permanent fixture and is one of the first spots that we see King Hakeem return to in America, and the language there remains the same: one of the barbers (played by Murphy himself) referring to him now as ‘Mufasa’, to the erupting laughter of everyone around him. It might be cheap laughs for comedic value but it does uphold harmful stereotypes of Africans looking like animals, and lazy associations that reduced African people to pop culture references, stripping them of their identity and heritage. However, interestingly, in the new trailer, the film appears to be set mostly in Africa where the heir is taken to be sworn in, accompanied by his American mother (played by Leslie Jones). So perhaps this time, rather than cheap comedic moments like previously seen, we will get to see perceptions that Africans have of African-Americans (but this runs the risk of also being sensationalist).

African-American culture is so broad in the sense that its impact is felt greatly in many other continents. Growing up, I distinctively remember everything that was American was considered cooler, and anything African inferior in its place. So, the fashion, the music, the entertainment that many African children consumed while growing up was that of Black Americans, and it somehow formed communities of Black Africans, both back at home and in the diaspora, who remain connected and formed a common universal language built around the popular culture we consumed. Given this, it’s interesting to see King Hakeem in 2021 being taught how to walk and sag his pants, while chanting slangs like ‘hey ho’, things that any modern-day millennial in Africa would be privy to, having seen, or observed popular Black American culture.

Another aspect of the sequel that would require close attention is the way in which women are depicted in the film. Judging from the first look that the new trailer brings, we can already see that traditional gender roles will be confronted here. For the sake of not giving too much away, King Hakeem wants his newly-found son, who is now of age, to take up his rightful place as the heir to his throne. But what Hakeem fails to realise – however well-intentioned he is to reconnect with his son – is that his eldest daughter would have been in line for the throne and is perfectly capable of ruling the people of Zamunda. We see a dinner-table conversation between Hakeem’s daughters discussing whether their sister Mika will take the throne. But we’re once again reminded that even in mythical lands, there are gender disparities that are upheld by the law.

Although there’s also little to no female representation in political leadership in present-day African countries, we can still get the happy ending that we deserve in film, and the creative license can be used to subvert the negative and misogynistic stereotypes that the original film played into. The new trailer doesn’t give away who eventually takes the throne but the depiction of female characters is already looking up to be much better than the original film, where women were made to serve the royal family in scantily clad attire and were made to answer to all the commands demanded of them. There’s a real opportunity for Coming 2 America to take things a step further and explore female leadership and true power, particularly through the lenses of a young Black African woman.

All these issues also bring us back to a detail that seems to have been ignored, the lack of African co-directors or scriptwriters involved in the sequel. If at all we’re going to progress from consuming deeply sensationalist portrayals of the African continent then more attention needs to be paid to those telling the stories on the backend. Going beyond this, Coming 2 America will definitely be a must-watch today for many audiences looking for a way to reconnect to the familiar, but this time it’ll certainly pay to see things done right. With the recent slew of Afrofuturism content from films such as Black Panther and visuals such as Black is King, there is undeniable hype for the eventual release of Coming 2 Ameria, but if the film continues to reduce cultures, traditions and dialects to offensive stereotypes, y’all can keep it.

You can watch the original film on Netflix here.