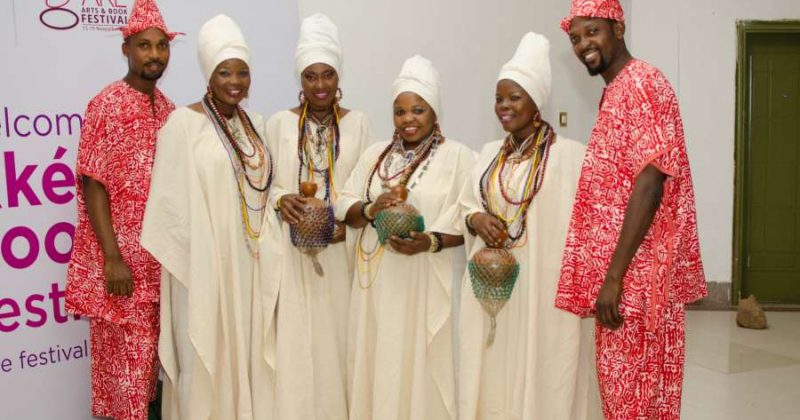 Ake Books and Arts Festival is to creatives what Wimbledon is to tennis lovers. With every edition they continue to attract different people from all works of the world, who share a  passion for one thing. Art. I’ve never heard of Ake until a few weeks ago through a friend [yeah i can show you the rock I’ve been living under]. With all the book readings, panel discussions, film viewing, and palm wine and Poetry lined up in their programme, I knew this festival needed me. So when the opportunity arose here at NATIVE,it was only right that I took it. While the programme was at best tempting, the way to get here was anything but! But all that detouring together with the hurdle that came with waiting for accommodation, took nothing away from my first experience at the Concert. In fact all of that made it better.

Held at Hubert Ogunde Hall, The live concert opened with a guitar and a voice that evoked in me a sense of belonging, although I couldn’t understand what Celeste was talking about in her song, with her alto rising and falling like waves, to match her fingers on the guitar. I felt she was telling her truth. One that deeply resonated with others in attendance as there were murmurs of agreements. Her second performance Aditi, a slow song about the stress that accompanies hoarding secrets close our hearts. The telltale sign of it’s presence on our fallen faces and the kinship that comes with sharing the burden.

The second act by Joyce Olong was, definitely one of the  highlights of the night as she spoke and touched a lot of hearts with three songs over flowing with three core themes. Marriage,Depression, Anti Violence. The  conflicting ideas of every mother and daughter about love and commitment. the idea that marriage should be every girl’s aspiration and the uncertainty revolving around finding the perfect one  “They say it’s a man’s world …If the love drives you crazy, bring him home”. her second performance was born from her struggle with depression. One she hopes will inspire someone to get better, with this message. “I want you to stay for another day”.  I certainly had goosebumps during her last performance, listening to her sing about shackles and the violence associated with those in the armed forces, whom as opposed to their sworn oath to serve, go about lording over people and responding with violence. To the soldiers she asks

“If I challenged you with your face, would you be able to stand for long”

Still savoring in the delight of Joyce’s act, I paid zero attention when the third act came on stage. Singing about the desire of everyone to be loved, Then Aramide entered her second performance with a song about the indescribable nature of love. Strumming her guitar, she strummed my attention too but didn’t hold it because i didn’t want to believe someone could out do Joyce’s performance.  Not until she switched the atmosphere with her “Money” song.  Throw in a guitar, her ever changing vocals fused with her backup singers’ and a sample from Rihanna’s “Bitch Better Have My Money” then you know why, I had to walk up to her after her performance to personally congratulate her on proving me wrong.

Lola Shoneyin came on stage to announce the fourth act “Adunni Nefretiti” a band of four women, who took us to these places with their songs. Abeokuta, Ijebu,Hausa, Edo, Benue, Igbo, Urhobo. At some point we left the boundaries of Nigeria travelling to Ivory Coast, Pakistan, Ghana, South Africa. One of the noteworthy detail of their act is that giving no care to what country the song originally came from, each track was accompanied with the drum, giving it that Afro flavour. With the drummers, flutist rising swiftly to every switch and turn as we journeyed to these places. At some point I couldn’t tell if the singers were directing the flow of the instruments or if the reverse was the case. Just when the Nefretiti were packing up to get off stage, something happened. A lady came up with a request for an Arabian song and right there with the mic in her hand, without the aid of any instrument, Adunni broke out with an Arabic song, backed up by her Nefretiti gang they gave a notable performance. I feel like this is definitely one of those moments you need to experience for yourself to get the hang of it, because even your imagination will fail you.

The last performance was by Salawa Abeni and her band with strings of songs that literally brought the house down. While everyone was on their feet jumping and singing along, I, the girl under a rock could only nod my head and pretend I knew what was going on. When an older man turned to me and said “I grew up listening to her” . I sat down to reexamine my childhood and wonder where I’ve been all my life to have missed out listening to these Afro songs fused with  fuji, a sound she defined as Waka Music. oh right, A rock. That’s the beauty of attending Ake Fest to engage and allow your mind discover for its self new interest, new guilty pleasures. After the powerhouse Salawa ended her session, I felt educated, or was it emancipated, I’m still deciding.

These are what you missed at #AKEFest2017

Next Article Essentials: Deelokz’ worries and thoughts are vast on “Vinyl Plays” and he writes accordingly