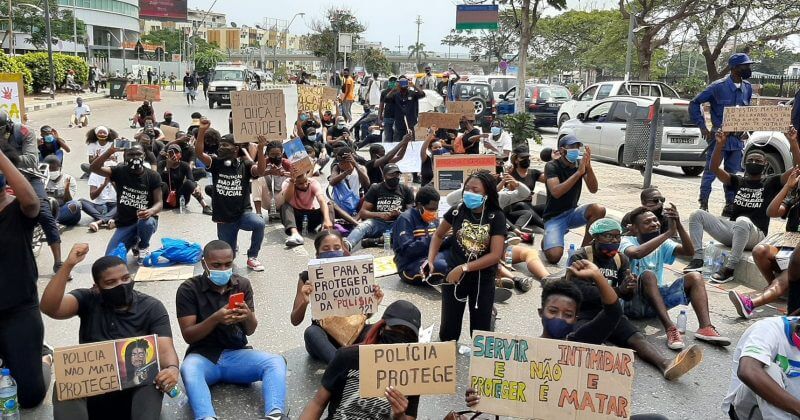 2020 has been a truly historical year. At first, we opened our history books to compare the coronavirus outbreak to other pandemics that have shaken the world in centuries past. As the year has progressed, however, our fight against COVID-19 took a back seat, as the world finally demanded an end to the wanton corruption, injustice and inexplicable inequity perpetuated by our world leaders – an oppressive characteristic that trickle down into, is even upheld by, the failing police systems that abuse their power worldwide.

Over the summer, the Black Lives Matter movement dominated the media, as, following the murder of George Floyd, Americans flooded the streets once again to protest police brutality and America’s racist, classist and sexist governance. This month all across Africa, protests have flared up as the people of Cameroon, Namibia, Congo, Nigeria, Liberia, and other countries rise up to take their stand against the bad governance that persist across the nation, that results in crimes against human beings, from police killings, to sexual and gender-based violence, child trafficking and underage labour under unsafe working conditions. Over the past five days, this is the battle Angolans have been fighting, a movement tagged #VidasAngolanasImportam on social media.

Demonstrations began last week Saturday, in Angola’s capital city of Luanda last week Saturday, with the people demanding that local elections – which have ben postponed as a result of COVID-19 restrictions – finally hold. Five days later, and Angolan’s have been given a plethora of reasons to protest against police brutality, bad governance and corruption. On October 24 a Presidential Decree was imposed, restricting street gatherings to a maximum of five people, and in accordance with this decree, the Angolan Police Force have been targeting and harassing protestors who are defying the mandate in favour of fighting for a truly democratic regime. According to the interior ministry secretary Salvador Rodrigues, as reported by the BBC, over one hundred people were detained at Saturday’s ‘Citizen March‘, with protesters due in court next week Monday.

Much like during the #EndSARS protests in Nigeria, the Angolan police are systematically silencing the voices of the protests, through these indiscriminate arrests and also by thwarting press coverage of the events ongoing in Angola. It has been reported that at least eight journalists have been arrested during the demonstrations, harassed physically and verbally whilst in custody – for days in some cases – for simply doing their job, with the requisite press credentials. With journalists being silenced, the need for social media becomes even more pertinent as first hand reportage from users on ground becomes the primary source of information dissemination. During civil uprisings worldwide, social media has been the foreground of activist organisation and continues to prove an invaluable resource in the revolution. Governments’ threats to limit social media usage are only further evidence of their malicious intentions in power.

The National Union for the Total Independence of Angola (UNITA), is Angola’s primary opposition party, and has made every effort to align with the #VidasAngolanasImportam social media campaign, in a bid to prove their dedication to good, fair and democratic governance. Endorsing the protest, the UNITA spokesperson, Marcial Dachala spoke out against the excessive use of force by the police, saying protests “should never be met with tear gas, live bullets,” and demanding, the “unconditional release” of the protesters and journalists that had been arrested. Dachala, additionally, condemned the ruling parting, saying: “The behaviour exhibited by the regime clearly shows that Angola is in a state that is neither democratic nor based on the rule of law.”

Unlawful policing is rife within Angola, with Manuel Ekuikui, UNITA’s provincial secretary in Luanda, himself, having been attacked by the police. Last month, Angola’s Doctors’ Union also protested police brutality, in the wake of the death of their fellow medical professional, Silvio Dala, who was apprehended for breaching COVID regulations – driving without a face mask – and died in police custody. Though the police claimed Dala suffered a heart attack, fell (incurring minor head injuries) and then died, blood and scares were found on the 35-year-old victim’s body upon its release to the morgue.

It is clear from public grievances all over the world that the police systems need reform. Officers are keen to abuse their power, only bestowed upon them to protect the citizens, and are brainwashed with the same oppressive ideologies that plague our corrupt leaders too. Thankfully, this year, we are putting our feet down and demanding better, for ourselves and the world. The fight is far from over, but victory is ours.

ICYMI: HERE’S WHAT WE KNOW ABOUT THE ATTACKS IN KUMBA, CAMEROON