Turntable Top 50: Teni continues her stellar run at the top of the charts

"For You" spends its fifth consecutive week at No.1

This week, Teni is spending her 5th consecutive week at number one with her Davido-assisted single, “For You”. The track was the first taste of her which features on her recently released debut album ‘Wondaland’, and has continued to sustain momentum since its release last month with over 1.08 million equivalent streams across all DSPs and 38.53 million in radio.

“For You” is closely followed by Dj Kaywise’s “High Way” featuring Phyno which spends a seventh non-consecutive week at No. 2 on the Top 50. The song also becomes the longest No. 1 on the radio chart after spending nine consecutive weeks atop the Top Airplay Chart with 44.67 million radio airplay impressions. Coming in at No.3 is Ajebo Hustlers “Pronto” featuring Omah Lay which makes the duo’s first top three entry and Omah Lay’s third entry.

Omah Lay’s “Godly” comes in at No.4 on the Top 50 charts after previously spending a record 11 weeks at No. 1 while Wizkid’s “Ginger” featuring Burna Boy returns to the top ten, jumping 14-5 following Grammys win for both artists. Also within the top 10, Dangbana Republik & Bella Shmurda’s “Rush” stays at its No. 6 high while Rema’s “Bounce” is steady at No. 7. While Ayra Starr’s “Away” drops to No.8 on the charts and is closely followed by Ice Prince and Oxlade’s “Kolo” at No.9. Rounding off the top ten is CKay’s “Felony” which descended from its previously held no.8 peak.

Outside the top ten is Chike and Simi’s “Running to You” at no. 14, Focalistic’s “Ke Star (Remix)” featuring Virgo Deep & Davido moves to No. 15 while Gyakie’s “Forever” reaches a new peak of No. 18. Turntable chart data also suggests that Gyakie’s “Forever” is pacing to challenge for No. 1 on the Top 50 next week following the release of its remix with Omah Lay on Friday. 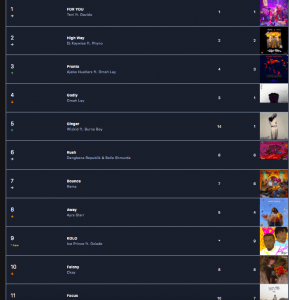