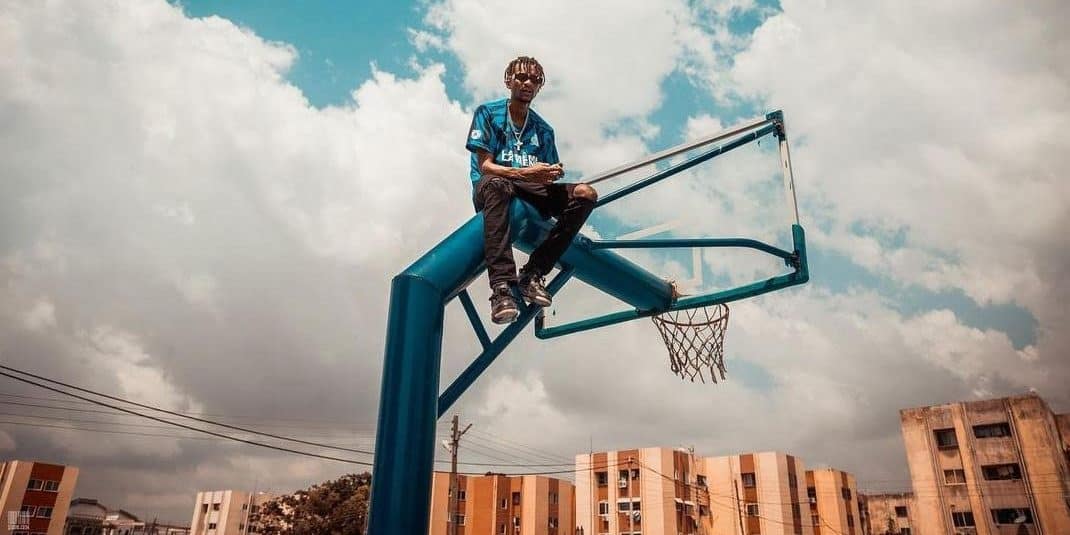 maintaining his stride as a solo artist

When $pacely declares himself a young OG on the introductory title track of his latest project, ‘Keanu’, it’s with a deadpan candour, more as a statement of self than an aggrandising claim. It makes sense that he has this sort of chip on his shoulder; the Ghanaian rap artist has done his fair share in expanding the idea of what rap music made in Ghana sounds like. During its mid-2010s tear, $pacely was an integral part of La Meme Gang, the collective significantly responsible for translating Trap’s exuberant expressiveness and boisterous bounce into a local and regional cult following.

Following La Meme’s hiatus, which has been coloured by controversy, its comprising artists have turned to solo endeavours, and $pacely has been moving in stride to that regard. Around this time in 2019, he dropped Fine$$e or be Fine$$ed, a remarkable debut project where he commingled his preference for trap with his own take on Afropop and R&B. “I’ve always just tried to stay true to myself at all times, especially as a solo artist,” he tells me one Thursday afternoon in September over a WhatsApp call, drawing a connection between the musical diversity he’s shown as a standalone act and the range of music that inspires him.

For his latest project, though, there’s an emphasis on rap, a back-to-basics exercise of sorts with an of-the-moment musical approach and complementary framing device. Named for one of $pacely’s alter egos, ‘Keanu’ is a nebulous concept project with a definitive mood, one where the rapper roots his lyricism in the invincibility of its title character. Rooted in trap and drill, the tape is undergirded by the constant presence of low-end knocks and percussive rattles, but it’s the melodic loops and piano samples—which sound like they’ve been pulled from scores of slasher flicks—that gives Keanu its palpable cinematic flair.

“The project is for you to feel how the main character feels, just going through the tracks for a full experience, from the beat selection to just the things I’m saying,” he explains. Often operating in that excitable but controlled space between sturdy flows and melodic phrasing, $pacely sounds youthful and invigorated as ever on Keanu. He’s already plotting his way to what he calls a proper album, but that doesn’t undermine the thrill of his latest drop.

Our conversation with $pacely follows below and has been lightly edited for clarity.

NATIVE: How did you get into the space of making Keanu?

$pacely: I think “Paradise” was the song that kick-started this project. I dropped that song last year and then I followed with “Roll Call,” that was like my first drill song and people went crazy for it. I was like since I have a mixture of Afropop stuff on the album I’m working on, I decided to just create a project around this reception. I mean, some people are calling it an album when it’s really not.

NATIVE: You’re not comfortable calling it an album?

Nah. I kinda made it as something to give the people while I work on the album because the sound on that is quite different and I’m taking my time with it.

NATIVE: Fair enough, since the project is named after one of your alter egos.

Yeah. I’m a fan of anime and just dope cinematic stuff. So this project is like taking you into one of my worlds, basically Keanu’s world. That’s just the motivation. My music takes account of everything I do, what I’m inspired by, and this project just shows that. I grew up in Switzerland and Anime was big part of it, we’d go to school and everyone would gather around to discuss what they were watching. That was a big part of growing up, so it consciously and subconsciously plays a role in my music.

NATIVE: Yeah, I can imagine. It even makes this project’s musical choices make even more sense to me.

Yeah, exactly. It’s in the mood, just the entire experience. The project is for you to feel how the main character feels, just going through the tracks for a full experience, from the beat selection to just the things I’m saying.

NATIVE: There’s that laser focus on trap and drill, as opposed to your debut tape that had a more diverse sonic approach.

I mean, yeah, but I’ve always just tried to stay true to myself at all times, especially as a solo artist. What you do is what inspires you, and that finds its way into the music, you feel me. I listen to a lot of music in general, well beyond just rap, so that will be in my music. I’m heavy on R&B, Afropop, and even some Jazz, I just like to keep myself inspired and that comes with being open to a lot of music. That means I don’t limit myself to one style of music, and besides, people might get tired of it.

NATIVE: For Fine$$e or be Fine$$ed, how were you able to get into that space of working with varying sounds?

I feel like it’s the production, ‘cause I was with a couple of producers that were making so many different things at the time and I just gravitated to all of that. For example, that was the time Odunsi was in Accra, and he had the experimental Afro vibes and we got to work together with that. And that’s what I’m saying with the album I’m working on, it’s a different sound, it’s not what you’ll probably not expect.

NATIVE: That line on the intro where you declared yourself a young OG struck me on first listen. How long have you felt that way?

For a minute. I feel like I’m a part of the genesis of this sound, we played a big role in introducing this type of style into Ghanaian music, and we inspired a lot of people by staying true to the sound. In Ghana, generally, the narrative is that you won’t get anything if you don’t do Afro, but there’s actually no one Ghanaian styles and there’s so much talent out here. Us coming, bringing in that type of wave, a lot of people saw that and followed. For me, being a young OG means continually working on my sound and also help in putting on creatives who believe in what they do.

NATIVE: You’ve been independent for the most part, which isn’t a cakewalk. What’s that experience been like, so far?

It’s been amazing because moving like that in Ghana isn’t the easiest thing to do. Doing promos, putting on your own shows, and other stuff is quite challenging but we’re doing it and learning along the way. I have my own record label, Labadi Music, also doing some stuff with distribution, and generally just doing as much as I can to maximise the reach of the music. It’s been quite the journey, I won’t lie to you.

NATIVE: Collaborations have been important to you, even as a solo artist. How do you source them out?

Most of the time it’s natural. I try to make it as organic as possible, get with the right people on the right songs and just make sure the timing is right. Like, I met BOJ through Kuvie, and it was just an easy fit because I met him through family. That extended to meeting Teezee—I think I was recording when they pulled up and we just worked together naturally from there. Sometimes, though, I also reach out to artists I wanna with. I reached out to the Kumericans, we went to Kumasi it was just good vibes and we were able to work together. They’re on their own journey and it’s good to see them doing their thing.