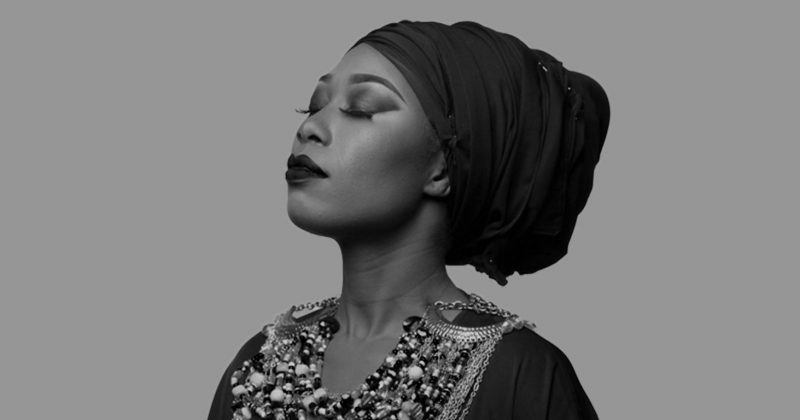 Lindsey Abudei has been a silent evangelist for neo-soul and afro-jazz music for nearly two decades. Her debut album ‘..And The Bass Is Queen’ earned critical acclaim for its dramatic compositions, compelling songwriting and Lindsey’s soothing, pitch perfect voice.

Prior to the release of her full length project, she had started her musical journey in Jos, collaborating with artists like Jesse Jagz & Ruby Gyang whilst still completing her law degree. Upon moving to Abuja, she meticulously crafted her debut project, an EP tilted “Brown” with musical composer and songwriter Atta Lenell, which featured a heavy jazzy texture and became a characteristic marker for her music.

Her latest single “One On The Outside” is an enthralling ballad, featuring a lush symphony of chords, tamed by Lindsey’s expansive vocals and gentle adlibs. Ahead of its release last month, we spoke to the songstress to discuss her experiences in the industry so far, her development in the time since her last full-length project, and what it means to be an artist.

NATIVE: It’s been 7 years since the release of ‘Brown EP’, using the knowledge you have now, would you have approached it recently?

NATIVE: How come you decided to take such a long break after ‘..And The Bass Is Queen’?

Lindsey Abudei: It took me 3 years to make ‘..And The Bass Is Queen’. I was taking my time, writing, recording, and figuring out what direction I wanted to go in. My musical absence is not deliberate, everyone has their own process, Lauryn Hill has toured the world with only one album. It takes a while to write, it takes a while to record. I’d rather not burn out just because I want to keep up.

NATIVE: Where does your confidence to not chase a hit single come from?

Lindsey: When it comes to my work, my confidence just comes from me being honest with my art, and how I like to create. People take 2 – 3 years to record an album, some even 5 years, Sade does almost 8 years before an album, so we should really start to embrace the fact that everybody has their own process, and accept it for the way that they are. What matters to me is that I’m not so particular and I’m not really crazy about getting singles out. I’m more interested in creating lasting bodies of work, because those last longer.

NATIVE: In your Ted Talk, you seemed sceptical about Afropop’s emergence on the global scene, would you say being a Nigerian artist holds weight in the international scene?

Lindsey: To be honest, the last couple of years have been really great for Nigerian music. I wouldn’t even call it scepticism, it’s more of a question; why that genre of music is the only genre that is being sold as what comes from Nigeria. For those of us who do genres that aren’t afropop, it doesn’t do justice to us. I’ve really been for opening up the spectrum and letting people see the other genres of music by Nigerians.

Being in residencies, I usually get the reaction; “I didn’t know that Nigerians made this kind of music”. So that tells you the story is not true, the story being sold doesn’t tell the whole thing, it’s only telling a particular part, and somehow the world is swallowing it. I think that there’s just a group of people who the media is selling to, and it doesn’t really go in deep. If you get past the surface, you realise that Nigerian music has not really dug in, as much as you would expect it to, and that for me says a lot.

NATIVE: Would you say that it’s because these genres do not have an extensive history in Nigeria as much as Afropop?

Lindsey: Well because the amount of attention on the particular genre – in this case, afropop–  definitely pushes the narrative that this is what’s popular, and radio plays more popular songs. The media focuses more on those musicians, more than other genres, and not many media platforms are catered to other genres. So I think maybe the saturation and the fact that there are more people doing that genre has a part to play.

NATIVE: Do you think it’s easier to make music these days, and does that affect the quality or value of the art form?

Lindsey: I wouldn’t say that ease of entry is the reason why the value of music is less, the way the industry is, sometimes, we’re made to think that everything is so fast-paced and that if you don’t fall in line or follow the formula, you’re not going to be recognisable, or considered.  So it puts pressure on the artist to keep putting out stuff, and in the effort of putting out stuff, you’re not really thinking about quality.

I think ease of entry has made it easier for people to actually know of genres that aren’t popular because the Internet has opened up avenues for independent musicians, there are now more tools and resources that are available for independent artists. There was a time where you couldn’t get your music on iTunes or Spotify if you weren’t signed, but now it’s pretty open. If you can pay the fees expected of you to pay for distribution, pretty much anyone can get on iTunes and Spotify or Tidal. Ease of access has made it easier for us to connect with more people outside of Nigeria for those of us who are not in the forefront when it comes to talking about Nigerian music.

NATIVE: Are there other aspects you would like to explore?

Lindsey: There are definitely parts of my creative side I’d like to explore more. I like photography, so far what I’ve done is mobile photography, taking pictures with my phone. I have a VSCO account where you can see some of the photos I’ve taken. With the experiences I’ve had for the residencies I’ve been in, I’ve gotten to the point where I would love to work in a way where I can collaborate with other artists in different disciplines, especially when it comes to visual arts, whether it’s film or photography. In the future, I’m hoping I can find a way to have that intersection between music and film, or music and photography as moving forward, as a way of expressing myself more, because I feel like these are two things I’m interested in.

NATIVE: Do you feel there has been much growth in the alternative scene?

Lindsey: I wish that we would get past having these two categories, if it’s not afropop, then it’s alternative. There are other genres, like r&b, soul, indie etc. I like that they are showing a different side of Nigerian music, but I feel like it’s also now creating this big box that they’re shoving people in, so if you’re not in afropop, you’re shoved into that and I’m not very enthusiastic about it. I still want to see it expanded, because I’ve heard people who have done good music, who are active in different genres, whether it’s afro-jazz or soul, and I want to see them come out and be shown as who they are, and not just shoved into a category that is not Afrobeat. The alternative name that doesn’t do justice to what the artist is saying about their music.

NATIVE: Which other artists are you currently listening to and championing?

Lindsey: Definitely there are people’s albums that I enjoy, like Asa’s album I was excited about, there are still people like Bez and many others like the Cavemen, who are doing this very interesting fusion of contemporary genres with highlife, people like that I enjoy.

ICYMI: NATIVE EXCLUSIVE: GHANAIAN RAPPER, Ms Fu Is Rooting For Every Woman In The Game

Next Article In Conversation With Jojo & David, The Brothers Behind No Signal’s 10vs10 Battles