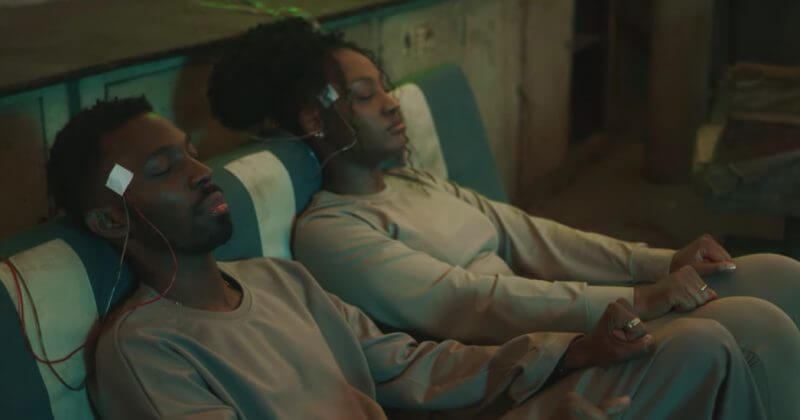 In a year as tumultuous as the one we’ve collectively survived, turning to music and entertainment as a source of relief from the harrowing events that have taken place is a mainstay. In fact, a few months ago, many members of our community revealed that they had found solace and peace in returning to nostalgic shows and movies to ground them in the familiar and ease their minds about the seemingly dystopian year we’re all coursing through.

Well, it seems our favourite alté group, DRB are also finding peace in the familiar, as they reimagine what the Matrix could look like within a Nolly-esque context in the new video for their Piooners standout, “Trouble” featuring Tems

In the Ademola Falomo-directed video for “Trouble”, sponsored by Jameson Nigeria’s exciting initiative, Seen and Heard, we see snapshots of The Matrix-inspired scenes, where the famous green computer codes and wired head jacks make an appearance as the group along with Tems escape their present reality for one that’s entirely out of their control. DRB depict a dystopian version of Nigeria–although we’re arguably already in one–as they venture into a virtual universe complete with a series of disconcerting landscapes, which transports them from a hallway full of mirrors to rooms of fire and death.

Tems is undeniably steals the show with her voice and her wardrobe, she transforms into a darker alter-ego of herself as she tries to make sense of her new reality. Given that the song’s lyrics soundtrack a tryst with danger and adventure, the video seems very fitting.

Speaking about the new video, the group shared:

“To us, it depicts a dystopian universal version of Nigeria. We wanted to cross-reference stuff from classic Nollywood, movies like The Billionaire’s Club, and mix that up with stuff like The Matrix. We loved the juxtaposition of how those two worlds collide, and that’s what DRB is all about -mixing up all the stuff we know culturally and putting it together.”

Watch the video for “Trouble” below.

0000
Previous Article For Us By Us: Living as a non-binary person in Nigeria