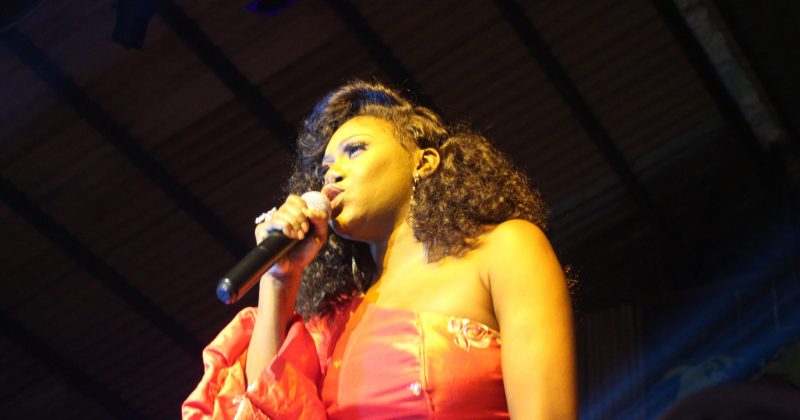 Up Close with Niniola

Seeing Niniola perform on stage is one of the most exciting things you’ll ever see. When she moves, you are struck by her poise and that smile and her laugh. Part of what makes her an exhilarating performer is her stage presence. You can see the control, depth, ease and decisiveness. She is a wickedly talented performer who seems to be in one place and everywhere at the same time when she sings and delivers on complex dance routines. Everyone’s gaze remains locked. In that moment you are drawn into her kind of music and her personality. This is no doubt part of why Kobalt Music Group just offered her a publishing deal.

It’s hard to imagine that she who intensely knows how to move a crowd, is actually an introverted person. But for Niniola, the stage is a phase of extroversion and periods of intense introversion. Before “Ibadi”, “Shabba”, “Soke” and “Maradonna”, Niniola was that woman who stepped into a room and skulked in a corner fiddling with her phone, praying to stay unnoticed. Soon after she began performing to small audiences from the little band she had, she shed her skin and found herself.

But how does someone become so confident in a society where sex is a prohibited and restricted topic according to social and religious customs, in a society where women are constantly told to guard themselves and ascribe to certain values that are rooted in misogyny. Rather than fight this limiting conception, Niniola is seeking to even embrace her sexuality as a technique when she crafts her songs.

Niniola’s opus is “Maradona” a deceptive afro-house that explores some seriously heavy topics by folding them into deftly chosen colloquial Yoruba metaphors. She doesn’t shy away from being ballsy and underscoring the raunchiness that makes the track what it is. A striking feature of Niniola’s music is the way she uses Yoruba for very lush lyricism, “I love to sing in Yoruba cause I think Yoruba is very cool —and [I sing in] English Language as well— but I’ll rather sing in Yoruba because that’s my mother tongue. And people love the Yoruba Language as well. It just sounds really…Sweet”, she says.

As an artist, Niniola pulls off that rare feat of transporting audiences of different strata, into the same paradise. Well, it was how it happened at her last performance in Fela’s shrine. Maybe it’s her flair for speaking and singing in Yoruba during her performances, without a blemish on her spoken English —thus her message is communicated across all peoples— or maybe it’s just the euphoria her Afro-house style of music brings. To talk of Niniola’s genre of music without emphasis on other genres she tends towards, like RnB and traditional country music, would be skewering important bits of her music or reducing her artistry to one narrow detail.

She is deft behind the microphone as she is in the mixing booth. By taking a hands-on approach to sound design, she is able to control how tight and well-made each and every sound and instrument she sings along with while in studio is. She likes the studio to be quiet and void of any distraction, this way, she is able to extract as much story, emotions and directions from the beat. Next, she pens down some of her melodies and lyrics before crafting the actual arrangement of the song to make it whole so she ensures it has a general theme and the verse connects to the pre-chorus and then the chorus. But anchoring all of this is God, whose steady guidance melds all of these parts into a very pretty whole. She says definitively, “God comes first, I pray to him to give me divine inspiration to order my steps and take control of the session in general, so at the end of the day, I have a beautiful song to present to my team and in turn, we present to the world, to listen to.”

In the years before Niniola became a mainstream artist, she studied music at home. As much work as it seems Niniola puts into making sure each part of her song is neatly woven, nothing about the song departs from who she is. She has learnt to be herself because that’s the only thing that matters —how an artist embraces herself. In effect, this is how her audience come to appreciate her cool on stage. Cheerfully, she says, “being cool is dancing, for instance my song “Gbese kan soke”, that’s being cool”. According to Niniola, “being cool as regards to my music, my style, and my creativity just means being comfortable in my own skin, me Niniola being able to communicate with people through my music, especially when I’m on stage performing and interacting before the audience”.

Niniola has proved she’s a force to reckon with. She is breaking into the mainstream of Nigerian music, while there’s certainly an evolution taking place, we’re well overdue for that debut album and on it, Niniola will get to the essence of what she’s been chiseling at.

ICYMI, See Niniola make the grade in this First Half of 2017 women in music review