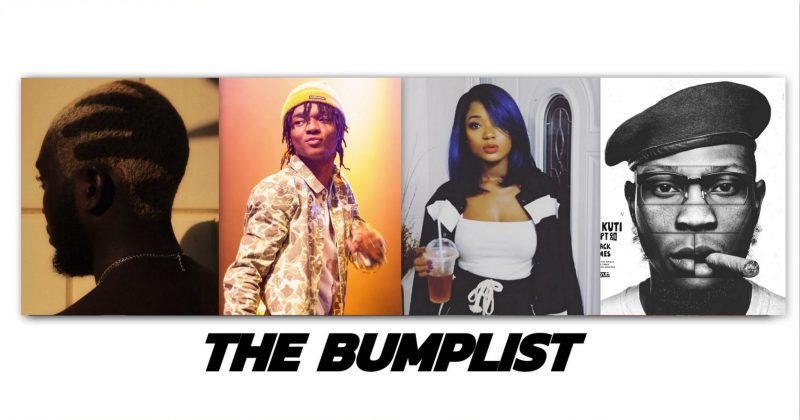 The Bumplist: The Kuti Brothers, Swae Lee, Odunsi The Engine and 6 more artists you need to hear this week

This much-talked-about acoustic-set track is the first single off Adekunle Gold’s upcoming debut album, ‘About 30’. It’s easily another one of the singer’s eclectic pseudo-spiritual releases.

“Last Revolutionary”, the opening track off Seun’s Black Times offers the perfect inspiration to lead a revolution against the oppression and injustice in today’s society. Through the urgent Afrobeat harmonies provided by the Egypt 80 band, Seun invites listeners to join the fight against injustice.

Dem Militarize Democracy – Femi Kuti
Perhaps because Seun took on Fela’s perceived aggression, Femi seems to have embodied the place of the level-headed elder brother who takes more inspiration from Fela’s positivity instead. This is even reflected in the titles of their respective albums dropped successively in the past weeks, with Seun opting for a grim depiction of the human condition with Black Times and Femi choosing an optimistic outlook on ‘One People, One World’. Thematically, however, “Dem Militarize Democracy” would be the track where Fela’s past and present align, in the work of his sons, and the activism the Abami Eda lived for. On this track, Femi Kuti runs through the hypocrisy of Nigeria’s so-called civilian rule, tracking a democratic era for the country that has failed to deliver on many promises.

Check On You – Cassper Nyovest and Davido

Following their respective wins at the SoundCity MVP awards earlier in the year, Casper Nyovest announced, two collaborations with Davido. “Check On You”, produced by Fresh VDM, is the first of two tracks expected from both megastars.

Nana Hemaa – (feat. Adina, MzVee, Efya, Freda Rhymz, EShun, Feli Nuna & Adomaa)
In honour of late Ghanian pop singer, Ebony Reigns, who recently passed following a ghastly car crash, The Ministry of Tourism, Arts and Culture and The Musicians Union of Ghana (MUSIGA) and The Ghana Music Rights Organisation (GHAMRO) got some of her colleagues together to render a tribute on wax. Try to hold back tears on that Efya verse. RIP Ebony Reigns.

In a true sequel fashion, to their earlier collaboration, “Phonerotica”, “Dark Side Down” makes room for all that has changed in the lives of both rappers within the twelve month period. Be warned, if you follow Patrickxxlee and J.Molley into this dark hole, you may never make it out.

From the three-track care package from the Sremm Brothers, this Swae Lee solo track shows just why people (not this writer) thinks he should go solo full-time. Imagine his star showings on French Montana’s “Unforgettable” and Rae Sremmurd’s “Swang” met and went for a drink. That’s what we get with “Hurts To Look”.

Alte Cruise – Odunsi x Zamir x Santi
“I Ain’t Really Got What You Need, But I’ll Be Here For The Night”, Odunsi sings, championing a derelict cause for relationships without any commitments. It’s not totally bizarre that King Zamir and Santi share his sentiments, but theirs come across as an unconventional approach to relationships, without sounding like heartbreakers, thanks to mellow production work by GMK

Izzokay (feat. Mayorkun) – Dremo
“Izzokay” is an elemental first collaboration for Dremo and Mayorkun who have been both spent considerable time under DMW. Fortunately, on this track, Mayrokun’s light comedy compliments Dremo’s lofty-minded gaze both artists trade bars strengthened by boyish banter, reflective of a chemistry built off more than studio time

The Bumplist is The NATIVE’s official weekly playlist – what we love this week, in no particular order

Next Article BadBridge, Bris B and Genio take no prisoners on new single, “The Distro”