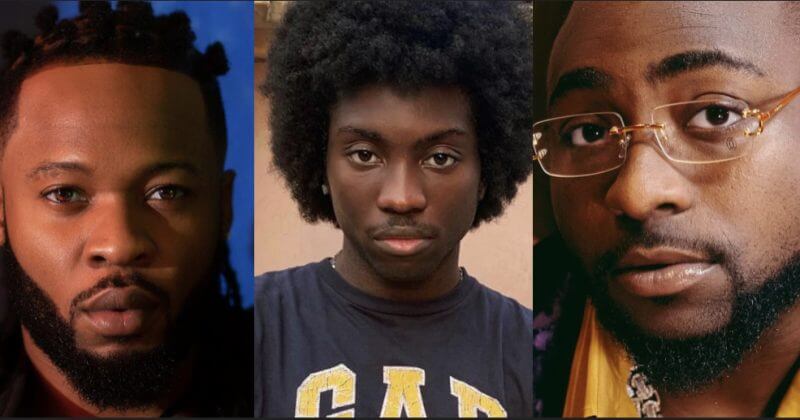 The last few months have been difficult. But with four weeks left until the end of the year, we’re trying to find more ways to be thankful and present in the current moment. While we’re still dedicated to amplifying and reporting the issues that have plagued us this year, we’ve now resumed our column, Songs of the Day as a nod to the artists putting out great music that serve as a momentary escape from all the grimness of the current news cycle.

Davido has continued his knack for offering cinematic visuals for his music as he just shared a star-studded music video for “Jowo”, one of the standout tracks from his recently released album, ‘A Better Time’. The video features RMD and former Big Brother housemate, Nengi who are cast as gang rivals in a video that adds more drama to the romantic narration from the song.

Directed by Dammy Twitch, the video for “Jowo” shows Davido and Nengi as gang leaders who were ordered to assassinate each other but eventually fall in love with each other. Though the script is cliche script, the acting and cinematography are impressive as we see the characters playing their roles convincingly while the laidback song plays in the background.

Odunsi’s growth from indie acclaim to becoming one of the cultural tastemakers of the Nigerian music scene allows him the freedom to experiment with different niche sounds. For his latest single, “Fuji 5000”, he attempts to bridge the indigenous Fuji sound with trap eccentricity, as he blends Yoruba and English lyrics while singing and rapping over the self-produced beat that infuses futuristic synth sounds and gunshot samples.

In a statement released with the song, Odunsi explained that the song is “a tribute to traditional Nigerian sound & traditional Fuji sound and just (him) putting (his) own twist to it. It’s basically a narration of where [his] mind has been since last year, up until now and an introduction to (his) new experimental sound and style of delivery”. We can’t wait to hear what he does next.

Flavour is back with his new album, ‘Flavour of Africa’, his 7th studio album. Though he seemed like he was heading towards a religious stint following his public association with the religious prophet, Odemeje AKA Indaboski, the new 16-track offering shows there are many sides to Flavour. He collaborates with people from different cultures all over the world including Fally Ipupa, Beenie Man, Tekno, Phyno, Prophet Odumeje, Waga G and more. “Looking Nyash” is set to the rustic rhythm of highlife as Spax produced a lightweight guitar-led beat that lulls listeners to nod their heads and move their hips, much like we can see in the video.

Mayorkun has dished out a new record for the dancefloor, “Your Body”. Produced by DMW’s favourite beatmaker, Fresh VDM, “Your Body” has a groovy beat which primes the song for dancefloors. Mayorkun’s lyrics and catchy melodies once more provide us with witty one-liners that have made him one of Nigerians more entertaining musicians.

We might not get to enjoy this song at a big music concert this year, but we can’t imagine anything keeping us from keeping this in regular rotation through the rest of the festive month of December.

Latin pop and afropop have enjoyed an impressive run of success in the global music scene lately and among the artists responsible for that are Mr Eazi and J Balvin from Nigeria and Colombia respectively. The two have teamed up for a new single, “Lento” where they combine the dancehall allure of afropop and reggaeton. The song is Mr Eazi’s follow-up to “Oh My Gawd”, which also featured international collaborators, Nicki Minaj, Major Lazer, and Nigerian singer, K4mo.

Produced by Killertunez, the mid-tempo beat for “Lento”, sets the groovy rhythm for him and Mr Eazi to go back and forth, performing vocals in their indigenous languages about partying. As the world grows more accessible for international collaborations such as this, genre lines will continue to be blurred for better or for worse.

Niyola just surprised fans with a new single, “Olúmorántí”, where she reflects on the loss she experiences when her father passed away. Though the new single is her first music release in 3 years, you wouldn’t notice from her captivating voice which is still as enchanting as it was when she first broke out as an EME artist. Over the melancholic piano harmonies, she sings “I can’t stop thinking of you” as she goes on to express feelings of hurt, pain and frustration. She eventually turns to her spiritual faith and finds resolve through a worship performance dedicated to God. Though the song is named after her father, she expresses sentiments that are universal for anyone who has experienced the loss of their parent.

The accompanying video for Niyola’s “Olúmorántí” directed by Unlimited LA and it stays true to the ambient mood of the song as we see Niyola performing the song in different scenes where she’s all alone. The only time she’s seen with other people is when we see three women dressed in white stretching their hands out to catch her while she ascends up into the sky.

Before this horrible year, one of the things that helped us get through the year was the anticipation of December festivities. Now that we’re in a pandemic-induced lockdown, and can’t go out to parties or concerts, the next best alternative is to live vicariously through festive music. Tekno recognises our need for merrymaking, and his latest single, “Enjoy” serves us the upbeat and jovial music we require after surviving to the last month of a year filled with overwhelming negativity.

“Enjoy” was released last month as one of the lead singles from Tekno’s anticipated debut album, and the singer has now updated the song with a fun music video to match. Directed by TG Omori, the video shows Tekno in different settings, where he dances to the groove of the beat produced by Blaise Beatz. We see Tekno moonwalking on a dining table, dancing inside a public toilet, chilling in a mobile swimming pool and dancing at a grocery store after locking out the security. These goofy acts are perfect for a song that serves as the soundtrack for bouncing through life like it’s a daisy field as Tekno sings “Allow me to enjoy myself”. It’s a refreshing contrast to reality to see him so optimistic, even as the song encourages listeners to enjoy life and avoid negative and problematic friends.

Earlier in the year, Tekno’s dropped “Sudden”, a more sombre song that reflected on the current political climate as he sang about the corrupt leadership plaguing the country. However, his mood shifted towards more lightweight themes when he dropped “PuTTin”, a dance-driven single in October. The newly released video for “Enjoy” builds anticipation for Tekno’s debut album, but while we wait, you can enjoy the video for “Enjoy” below.

Though it’s relatively easy to determine what sound dominated the mainstream in Nigeria when looking back at past decades, it’s a little more tricky to come up with a generally agreed sound for the mainstream within the moment. However, if there’s one sound that has a strong case for being inescapable in 2020, it’s the South African house music subgenre, Amapiano. Buju recently put out his latest single, “So Lovely”, embracing the lightweight groove of the ambient Amapiano harmonies produced by regular collaborator, Timi Jay. Buju’s soft vocals narrating his complicated relationship status with his muse rides the catchy beat as he delivers enchanting melodies that confirm his versatility.

Fela’s legacy continues to live through the many tributes from music lovers around the world as well as through Afrobeat music releases from members of the Kuti family. Femi Kuti’s son, Made is also towing in-line with the Afrobeat family tradition as he’s set to release a joint project with his father, ‘Legacy +’, which is scheduled to drop in February 2021. Leading up to the release of the father-son collaboration, the pair have each shared one single from the two-sided tape, “Your Enemy” and “Pà Pá Pà” which reveal that they’re continuing in the politically charged tone that was set by Fela.

Femi Kuti’s “Pà Pá Pà” comes along with an accompanying video directed by Adasa Cookey and it shows Femi Kuti performing the upbeat song that encourages listeners to speak up against dishonest and incompetent government; “we must face the government/ government must not waste our time”. The video shows him performing at the New Afrikan Shrine with cheering fans and we also see different shots of Lagos and her citizens.

LadiPoe started last year with a banger, “Jaiye(Time of Our Lives)”, a triumphant single that laid the runway for the impressive run he’s enjoyed so far in 2020. After delivering smash hits like Simi-assisted “Know You”, and “Yoruba Samurai”, the Mavin singer has reinvented “Jaiye” into an EDM song. He teams up with UK singer, Aluna who adds her airy vocals to the euphoric EDM beat produced by Nigerian EDM producer, Sigag Lauren.

Johnny Drille’s vocals from his contribution as the producer for the original single can still be heard on the remix while Sigag Lauren infuses the lush, jungle driving sound of Afro-house. The song’s message to pursue happiness is timely as we get into the last month of the year. However, aware of the tragic impact of the Coronavirus on those who have lost lives and means of livelihood to the pandemic, he announced that the proceeds from the song will go to a charity that raises money to benefit the fight against the virus in Africa.

With the pandemic and widespread protests that have happened around the world, 2020 is easily the most politically inclined year for most of us young people in the world. As a result, we’ve learned to pay attention to leadership and demand more accountability from them. Ghanaians will have the opportunity to elect their next president at their general elections scheduled to happen next Monday, the 7th of December. In the build-up to the elections, some of Ghana’s music stars, Stonebwoy, Efya, King Promise, Fancy Gadam, Darkovibes, Maccasio, Famaye, Teephlow, and Bethel Revival Choir have teamed up to encourage Ghanaian’s to come out to vote.

Over the groovy mid-tempo beat, each of the artists takes turns to encourage listeners to be united and conduct themselves peacefully during the elections. The elections pit the former president, John Mahama, and incumbent president, Nana Akufo Addo. A victory from John Mahama will mark a historic moment as his running mate, Jane Naana Opoku-Agyeman will become the first female Vice President in Ghanaian history. We hope the more competent candidate is elected on Monday as this song from the Ghanaian stars reminds us of the great talent who will benefit from a peaceful and successful election in Ghana.

ICYMI: Catch up on all the best music releases you may have missed from earlier in the week