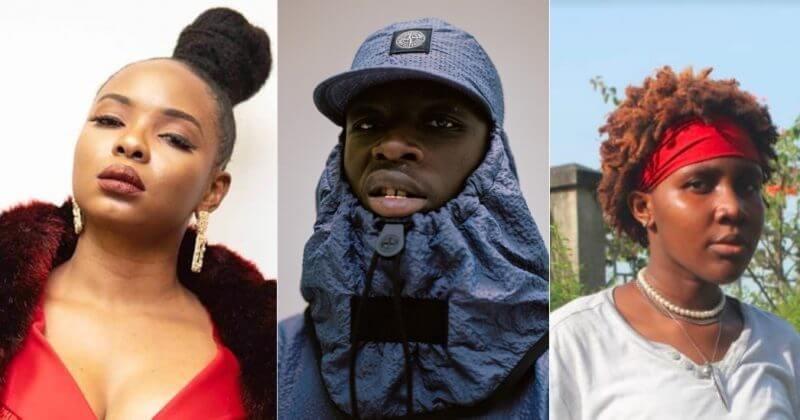 It’s been a while, but we’re now back at it. In a month full of loss from COVID casualties to peaceful protesters being shot at it didn’t feel right to carry on like normal, so we stopped everything to give all our time to the pressing issues at hand, it’s still #EndSARS, but let’s also find a welcome escape from the bleak reality of the world.  Even though it’s all quite overwhelming to take in, music has provided a necessary escape, and throughout the year, musicians have continued to release music that motivates us as a return to normalcy no longer seems certain.

We know it can be difficult to keep up with all the diverse streams of music so we’ve created this column to keep you, our readers, up to date with all the finest tunes coming out of Africa and the rest of the world. These are the songs you absolutely need to hear. We’re resuming Songs Of The Day again to support artists who are providing momentary escape through these strange times, here are our favourite picks to start your new week.

Yemi Alade is always working. After releasing her fourth LP, ‘Woman of Steel’ last summer, the singer/songwriter is back with her fifth studio project ‘Empress’ out later this year. Ahead of its release, she has now shared a new single “I Choose You” featuring French singer Dadju. The afropop number addresses the two women’s desire to remain in love with their respective partners forever. Singing “If you take one step, I go take two step/Na you be my lover for life”, Yemi Alade captures the intoxicating feeling of being in a new relationship.

Last week, UK-based rapper Pa Salieu released his debut mixtape ‘Send Them to Coventry’ to incredible fanfare. The EP was brimming with stories of his Gambian upbringing and Coventry, his home in the heart of the West Midlands. The Mahalia-assisted “Energy” is one of the EP’s sweet spots, offering an introspective and reflective bop which speaks about societal issues, struggles with a broken system, self-care, and more. The accompanying video directed by Femi Ladi sees Pa Salieu delivering his rap verse in a black-and-white scene, as people carry out their various activities around him. He’s then joined by Mahalia, who brings some much-needed colour to the track.

R&b singer, April Maey has just released the video for her single “Starry Nights”, a standout on her debut EP ‘Ticket to Anywhere’ released back in March. In the animated video, a young couple takes a drive out to a campsite where they sit under the moonlight, playing and enjoying each other’s company. Speaking about the video, April Maey shared that “the video is about two young kids who try to save the moon by freezing time and putting the moon back where it belongs, in the sky”.

Alpha P is back with a new EP, ‘Wolves & Mustang’ nearly a year after the release of his debut EP ‘King of Wolves’. The new release is a 4-track piece deftly weaving a range of genres from afropop, trap, r&b, and more, however, the Psycho YP-assisted “Vibe With Me” features as the project’s standout. “Baby let me give you all my love/oh baby vibe with me” sings Alpha P on the song’s first verse, as he expresses his romantic feelings for a muse.

US-based afropop artist, Chimzy is back with a new single titled “Tornado” and it’s fire. His new single is an up-tempo number that shows off his clever wordplay and enviable flow as he effortlessly glides over the drubbing beat. Singing “If anybody, dey go put e hand for the fire/giving the like tornado”, Chimzy makes music for people to party to and feel themselves despite the clear warnings in his lyrics. He sends a message to the opps, warning them that trying him is synonymous with unleashing a blistering tornado storm.

Back in October, singer/rapper Ictooicy teased the release of a new song titled “Feel Da Same”, her official first official trap release of the year. Fans immediately cried for a taste of trap Icy, teeming with excitement about what she would sound like on a trap beat, and now, the moment is finally here. Released over the weekend, “Feel Da Same” is a bouncy number that finds Ictooicy on her best form. Over the fast-paced uptempo beat, Icy rap-sings “Why do these niggas keep hating on Ictooicy/See me on IG, don’t smile for tha cam” running through a list of way’s she feels the same. She finds herself stuck in the same routine but rather than give in to this rut, she’s energetically counting the bands, hanging with her friends, and pouting for the gram: c’est la vie.

After the release of his extended mixtape ‘Festival Bar EP’ earlier this year, rapper Davolee is back with a new single titled “Happiness” just before the year runs out. The rapper who just welcomed his newly-born daughter is now expressing the joys of fatherhood with the latest single as he celebrates his wins and marvels at the joy he now experiences. Over the uptempo beat produced by Crespin, he sings “celebrate your wins cause problem no dey finish” encouraging his listeners to tune into whatever makes them happy and hold unto it because all they need in this life of sin is happiness.