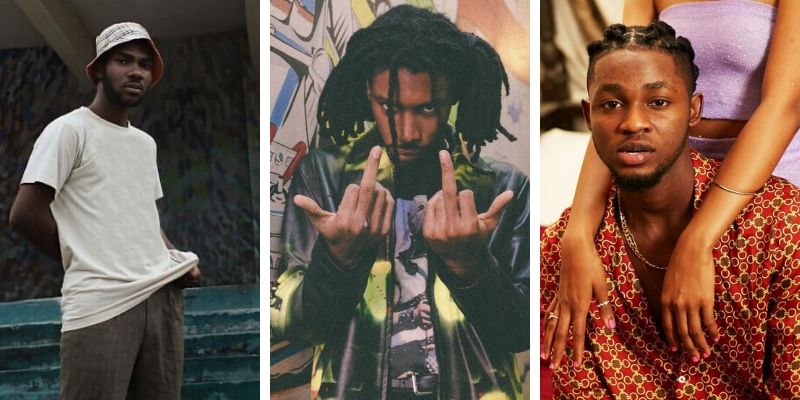 There’s a lot going on at the moment. Regardless of all the shit, music has been one of the things that has kept our spirits up and sustain our sense of community. Artists from all around the world have continued to put out new music from quarantine and their relatable subject matters help us relive past experiences, dream of a better future, or just enjoy the present moment. Because we know the volume can be overwhelming sometimes, we’re saving you the stress of scouting by sharing our selection of latest releases that reflect the liberal and diverse state of African music today.

Our midweek curation included releases from Wande Coal, Tome and Runtown, Trill Tega, Ade Lasode, Yhemhi, Bizzonthetrack, Olamide David and Dwayne $tunna among others. To get you in the right mood for the weekend, we’re bringing you the new animated video for Kiienka and PsychoYP’s collaboration, “Gvnz and Roses” as well as new music from Tochi Bedford and Cruel Santino, Loti, Davolee, Superwozzy and Barry Jhay and Jesse Jagz. You’re welcome.

A feature on a DJ’s song seems to be a rite of passage for Nigerian artists, and DJ Spinall has featured some of the biggest artists we have today in the early stages of their career from Burna Boy to Mr Eazi. Now it looks like Omah Lay is having his moment, and just one week after the release of his debut project, ‘Get Layd’ he has returned with some more heat so we can’t forget him in a rush. Against DJ Spinall’s slow tempo beat decorated by heavy percussive patterns, Omah Lay is singing everyone’s current mood out loud. On the melodic hook, he sings “I wanna thank God for life, I just wanna make up my mind, don’t wanna be traumatised”, which is very fitting for the heavy mood looming around the world at the moment.

Kiienka’s latest project’s lead single, “In The Ends”, earned a spot on Ebro’s Beats1 radio show on Apple Music to follow up with that milestone, he’s released an animated video for “Gvnz and Roses”, another standout tracks from the project. With the PsychoYP assist, “Gvnz and Roses” sounds like Kiienka trying to introduce himself to a wider audience, and he doesn’t fail to impress with his catchy flow and imaginative brags; “I might just walk on water like I’m Jesus/ Pull up the glock and you rest up in roses”.

The animated video by VX Animation portrays the colourful lifestyle Kiienka and PsychoYP describe in their lyrics, where they are seen standing on the ocean while they rap and show off their shiny jewellery.

Tochi Bedford has been building anticipation for his latest single, “Disintegrate” since the start of the year. First, we heard the snippet with a heartwarming dance video to match, then he announced that Santi would be featured on the record and we knew this was a special one. Though Tochi already has an impressive record of working with established artists like Zamir, Odunsi and more, his boastful lyrics on “Disintegrate” are made more convincing by Santi’s feature. The atmospheric trap beat he produced sets a pleasant pace for him and Santi’s braggadocios lyrics. Saying: “I was a kid, fucking your bitch in the field”, they never get dangerous, but still sound very troublesome.

SuperWozzy and Barry Jhay share a preference for making inspiration songs, and we can all agree that we need a bit of that at the moment. The pair are a match made in heaven on “Gratitude”, and over the Wicked Beatz-produced mid-tempo beat, SuperWozzy raps in a mix of English and Yoruba as he delivers prayerful lyrics expressing his appreciation of God’s blessings and asking for more. Barry Jhay‘s melodic hook spices up the song and heightens the spiritual appeal of the song with his enchanting vocals.

Davolee broke out in 2017 with “Festival Bar”, a rap song with a captivating tale told from the very descriptive perspective of a bartender working at a bar in Ikotun. The song quickly became popular on the streets of Lagos and earned him the recognition of tastemakers like Olamide who signed him to his YBNL label. However, sharing the limelight with other rappers hasn’t been too kind on Davolee and even his attempt to appeal to the mainstream sound on “Cirocing” was met with modest reception from fans. The rapper has now broken ties with his former label and is returning to the basics with ‘Festival Bar’, a 4 track EP based on his debut. “Festival Bar 3” is one of the tape’s standout track with its detailed narration of his experience trying to get a visa or as they say on the streets, “Japa”. On “Festival Bar 3”, Davolee continues to show off his storytelling songwriting chops while embodying the hustler mindset that makes hip-hop songs compelling.

Whether you realize it or not, Buju has become one of the most popular artists in Nigeria. Over the last 24 hours, the afro-fusionist has featured on 2 separate songs, one of which is Loti and KD’s “Time of our Lives”. “Time of Our Lives” is the 2nd single from Loti and KD’s anticipated EP, ‘Sins and Scenes’, and it continues where they left off on the sex-positive first single, “Realer” as Buju joins them on their quest to celebrate their youth. KD’s lightweight mix of percussion, horns and drum riffs sets a groovy backdrop for Loti and Buju’s melodic performance with lyrics describing the joys of the party lifestyle they’ve subscribed too; “We are still young/ We need some fun”. Given the suggestive title of the coming EP from Loti and KD, we expect more moments celebrating their self-indulgence.

“Even if shawty run away/ I bet you, she’d come back another day”, Jesse Jagz raps on “B”, a standout track from his new tape, ‘Garba’. The 5-track EP narrates the Jos-raised rapper’s growth from the underground to the mainstream, and he retains the confidence of his inspiring journey as he laments the loss of lovers on “B”. Over the trap beat, he explains the lessons he’s learnt from his experience with different lovers saying “Now I know even though I run to and fro/ for sure, girls at the door will come and go/ ain’t nothing last forever/ all plastic and leather”. It’s a song which wholly translates Jesse Jagz’s experience with relationships to fit into the project’s depiction of his journey to becoming one of Jos’ most famous rappers.

ICYMI: Check out our Best New Artists picks for the month (May)

Next Article Fresh Meat: Best new artists this month (May)