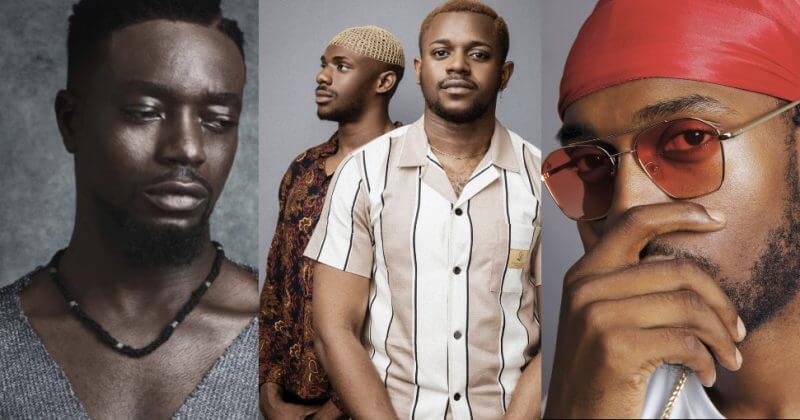 We ended last week’s curation for Songs of the Day with new music from; Kwesi Arthur, Simi and new collaborations from Alicia Keys and Diamond Platnumz, Darey and Patoranking, Bankuli and Congolese singer, Hiro, Leehis Jr, Shaun Mbah, Big Daddy Kave, Ictooicy and R¥DA, NSG, and more. To start the new week, Today’s curation for Songs of the Day features the latest releases The Cavemen, Skepta, L3 and Michael Phantom, Eugy, Toyé, Sir Dauda and Simi. You can enjoy them below.

Though traces of highlife guitar riffs remain ingrained in the DNA of afropop, the genre is not quite the rave it used to be in the ’60s. Lagos-based brother duo, The Cavemen, however, are on a mission to reignite the spark of the historic guitar-led sound. Their impressive debut project, ‘ROOTS’ channelled the nostalgia of highlife as they narrated different romantic scenarios.

The band has now released the music video for one of the tape’s standout tracks, “Bena”, a captivating ode to a certain type of love. The Granville Wilson-directed video pays tribute to the band’s retro aesthetic with greenroom edits that are immediately reminiscent of music videos from the 70s. We also see cultural dancers reintroduced, while we see some of the lyrics being dramatised, as one of the band members tries to woo a love interest who’s only interested in money.

Skepta seems to have developed a fond relationship with the Essie Gang since he featured on the remix of Octavian’s “Bet”. His latest release, “No Stress” sees him teaming up with two other Essie Gang members, L3 and Michael Phantom as he flexes his production chops and delivers threats to his opps; “Kill your bloodclat tell that pussy don’t stress”.

L3’s lyrics also echoed Skepta’s threatening intentions despite his auto-tuned and melodic vocals. Phantom’s cocky bars come in at closing verse as they all rap over the menacing instrumentals. The video produced by BrathaBratha mirrors the edginess of the song with blurry frames and spooky lights. Though “No Stress” has the same title as Wizkid’s latest single, the two songs antithetical as Wizkid appeal to love and romance while Skepta wants the head of his haters.

Eugy released his latest project, ‘4 Play’ with the accompanying video for the opening title-track, “4 Play”. The cryptic ending of the video hinted that there will be more videos to give a more wholesome picture for the romantic-themed project. True enough, he just released the video for the tape’s second track, “Forever”, where he sings praises of his love interest over whine-friendly afropop beats produced by Janeson records Hamadoo.

The video  Gabriella Kingsley and Luke Biggins directed for “Forever” continues from 3 months from when the video for “4 Play” was set in. The relationship with his muse from the older video seemed as though he had been cheating on his main girl, however with this one, we now we see them together at parties with his friends. The video for “Forever” also ends on a cliff hanger, when both women meet at the party and we expect to see more drama in the coming videos from Eugy.

Atlanta-based Nigerian singer, Toyé offered an impressive dancefloor-ready tune for his 2019 debut, “Attitude”. Now, to keep the momentum going from the attention garnered for the song, Toyé has just released a Jada Kingdom-assisted remix that adds a welcome touch of a woman to the love song.

Jada Kingdom is a Jamaican singer and her contribution to “Attitude Remix” introduces the steamy sensibilities of reggaeton to the romantic song. Saying “Go0d punani make me get the bling/ You dey man it so well/ I will give you loving plenty”, her sexually provocative lyrics make the song fitting to sex playlists, while also blurring the lines between the Caribbean and African dancehall culture. It’s a late entry, but “Attitude Remix” deserves to feature on summer playlists.

Thanks to his guest feature contribution to songs from artists like Show Dem Camp, LadiPoe, Falz and more, Sir Dauda already had a recognisable voice before he released “Landlord”, his debut single under Bahd Guys Records. Though the single’s egotistic lyrics betrayed his soft voice, the singer has now shared his debut project, ‘Love Ex Machina’, taking a more sensitive approach with the 4 new songs contained in the 5-track EP.

Sir Dauda has now released the music video for one of the tape’s standout tracks, “Woman”, where he confesses his affectionate feelings for women; “This is love/ This is love that I’m feeling”. Directed by Dammy Twitch the video shows Sir Dauda seated on a throne with his muse, while Simi performs alone in a studio set. The video captures the song’s dreamy harmonies through ethereal glitch effects and fanciful costumes.

ICYMI: Catch up on all the unforgettable music releases from last week