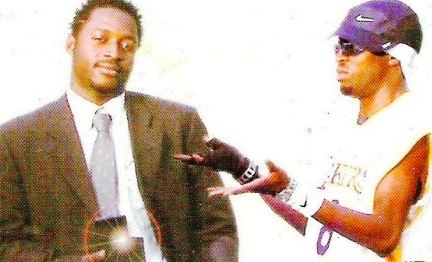 The Nigerian music scene has always been hip to the sounds and trends of popular music around the world; from the psychedelic rock era of the ’70s to the unmistakable hip-hop influences in our music from the noughties. Before Olu Maintain’s “Yahooze” set the pace for flaunting wealth and glamorising ‘the hustle’ in Nigerian pop music, his former group, Maintain contributed to the mainstream allure of hip-hop with their remake of Ludacris’ “Area Codes”, on their 2002 hit single, “Catch Cold”.

Tolu Maintain and Olu Maintain showed their wholesome embrace of sampling culture through their playful reworking of Ludacris’ flow and repurposing his tale of partying with women to fit their reality as Nigerians. Singing “I catch cold (Pele)/ Ase party won fo” over a stripped-down remake of the same beat Luda rapped on, they infused Yoruba and pidgin English to make the track even more relatable to their Nigerian audience. Following the release of the song, Tolu Maintain explained in an interview that his lyrics were inspired by his real-life experience at a party and the convincing lyrics, “Make I gist you/ E happen true true” make it hard to argue.

“Catch Cold” also managed to capture the influence of urban American culture on Nigerians in the noughties, beyond the actual music. The Big Bamo-directed video featured the duo sporting American fashion trends from the time, wearing large jerseys and oversized jeans, accessorised with flashy chains and durags. The group married their hip-hop influences with their Nigerian reality to create something unique, while still serving as good marketing to make the song instantly familiar to listeners.

Though we doubt that Ludacris himself was aware of this cultural exchange, the song highlighted the potential for cultural merges. While they set this trend, subsequent hit songs like Banky W’s “Ebute Metta” which sampled Rihanna’s “Umbrella” and Sauce Kid’s “Yebariba Samboribobo” which borrowed from Remy Ma’s “Conceited” followed suit without receiving any backlash.

Today, the African music scene is more recognised on the global stage, which has allowed for more mutually beneficial cultural merges. The Wizkid-assisted “One Dance”, Drake his first #1 as the lead artist on Billboard Hot 100 and Beyoncé tapping into our local talents from Tiwa Savage to Burna Boy for her compilation album ‘The Gift’ are a good show of this cultural merge, and also how far we’ve come.

We’re not sure that if “Catch Cold” or any of the aforementioned were released today, their approach would fly, especially given the current attitudes towards sampling and interpolation today. Luckily, it wasn’t, so we can enjoy the jam in peace. Watch Tolu Maintain break down the inspiration behind “Catch Cold” as well as the video for the song below.

Next Article Tems returns with “These Days”, a number fitting for the times