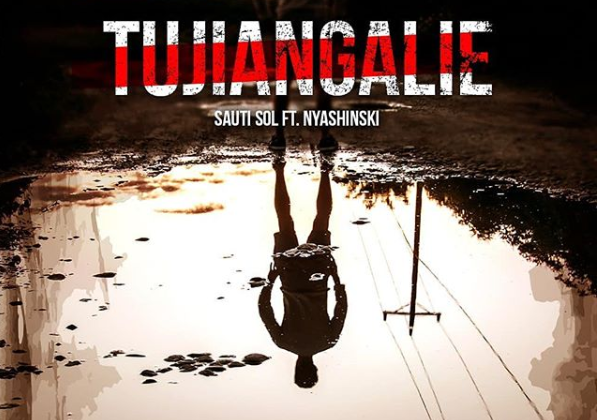 Language may not be universal, but the consequences of socio-economic conflicts are. Over time, musicians and other public figures from all corners of the world have lent their voices and employed their status to raise awareness and urge public action on the issues they identify with. The single global ecosystem that came with social media made it easier to pass these messages across faster. However, as Sauti Sol point out in their recently released single “Tujiangalie”, the positive messages are often clouded by distraction antis, which threaten the strides of messengers when communicating issues and educating the public. “Tujiangalie”, according to a statement from Sauti Sol, is an attempt to call out this anti-culture. The Swahili word, which translates to “look within”, is repeated continually, over soft-guitar strums that convey the earnestness of the message.

Though they sing entirely in Swahili, the accompanying lyric video goes further in communicating the message. As the group —assisted by another Kenyan singer, Nyashinski— urge Kenyan youths to slow down, introspect and reflect on their shortcomings, images of the fast-paced life of city dwellers slide through the background of the changing lyrics. A statement Sauti Sol released along with the video confirms that “Tujiangalie” will appear on their forthcoming pan-African album, ‘Afrikan Sauce‘, making this the 6th single released from the LP. Previously released singles include, “Afrikan star”, featuring Burna Boy; “Sweet n Short”, with Nyashinski and the Khaligraph Jones-assisted “Rewind”.

Next Article The Black Esper’s “Thoughts and Contemplation” on album, RICE