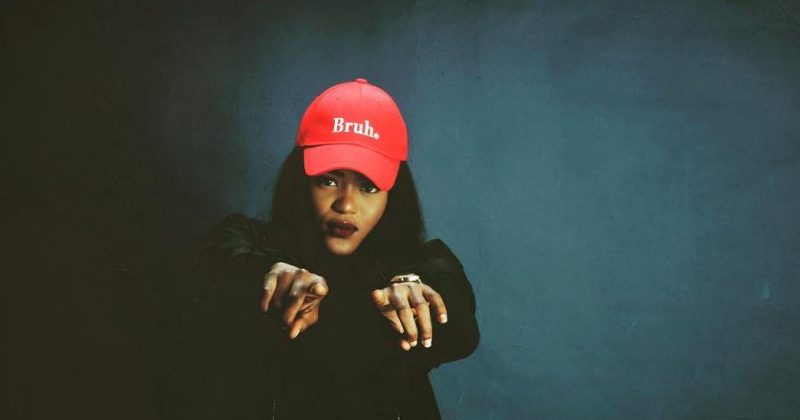 Meet Phlow, the confident rapper who is redefining her artistic perception

Every time an artist dares to evolve, it’s a way of rebelling against being boxed in by their previous work. Think Kanye when he dropped the auto-tune-heavy ‘808 & Heartbreaks’ after going on one of the greatest three-album runs in hip-hop history, or Santi, who transformed from a potential rap messiah into an artist who personifies the rebelliousness of the post-genre era. Today we have Phlow, who is in the midst of her own evolution, purposefully pushing past the initial perception of her artistry.

Introduced to Nigerian hip-hop circles through her affiliation with Str8buttah, a production company predominantly known for affiliations with hard-nosed, battle-tested lyricists, Phlow immediately garnered attention as ‘the female rapper who could hang with her male colleagues.’

Even though this is engendered by rap’s masculine and sexist tropes, this sort of treatment is deemed as high praise amongst many rap fans, since it means they have an artist to project their ideal image of what a woman rapping should sound like. In truth, Phlow is a remarkable wordsmith—her best work conjures the image of hot knife cutting through butter—but that ability created a rigid boundary around the music she was expected to make. Well, until now.

‘Marmalade’, Phlow’s latest EP, is more vibrant than anything she’s ever released, and much like its cover, it’s quite the colourful and impressionistic affair. The 6-track project is the work of an artist who is reclaiming her autonomy without abandoning her roots. At the core, ‘Marmalade’ is a rap project, however, what brings it together the most, are Phlow’s confident persona, improved songwriting helmed by big, bold and memorable hooks, as well as modish and infectious beats to match.

The EP was entirely produced and engineered by fellow rapper and all-round polymath, Alpha Ojini, and this collaboration allowed Phlow to be more spontaneous and radical in her approach to making the songs. She lets me in on their creative process saying: “Those were very interactive sessions, where we’d both contribute and bounce ideas back-and-forth, but 90% of the project was written and recorded on the same day, with no retakes”.

In addition to Alpha, the EP also features Psycho YP, Blaqbonez and Tomi Owo, with each artist acting as great co-conspirators without obscuring the fact that Phlow is the main attraction here. As a reset button, ‘Marmalade’ isn’t necessarily a grand arrival for Phlow, but it’s good indication that she’s on her way, constantly working on herself and barrelling forward through preconceived notions and personal losses.

Our conversation with Phlow has been lightly edited for clarity.

I know that I’ve been quiet, let the music have it’s say #Marmalade out on the 8th of May #dillygotitbumpin

NATIVE: How’ve you been holding up through the lockdown?

I’ve been on self-lockdown before the lockdown even happened, so I haven’t really left my house in like over a month.

How comfortable did you feel about rolling out a new project during this period?

I actually started working on the project last year, and the plan was to release it earlier, but a couple of things happened that laid me down for a couple of months. The funny thing about this lockdown is that I sort of feel like everyone came to meet me where I was emotionally. I’d been shut-down since like last November after I lost my dad, and it pretty much took the entire world shutting down as well to sort of revive me.-////////////I know that sounds conceited, but that’s what gave me the zeal to drop the project.

Let’s go back a bit. Did you feel any sense of expectation after your debut EP in 2016 with Str8buttah?

2016 was actually really nice for me. Right in the middle of dropping that project (‘Mind, Body & Phlow), Hennessy was doing the VS Class competition, I was in the same year as Blaqbonez and we both won that season. I didn’t really feel the expectation then, I was sort of in a bubble and just working on music I liked, hoping that more and more people would vibe to it. After that EP, I still dropped three more projects that are super-personal, which was pretty much just ripping pages from my journal and recording in the studio. The pressure didn’t really get to me until the end of 2018, that’s when I was like, ‘there has to be a shift of some sort’. I was still making music—I never stopped—but I was trying to level up, be more relatable in a sense.

What role did being looked at as the ‘pure lyricist’ play in your attempts to level up?

I feel like that perception can be very limiting. For the first couple of years, it was kinda nice, like, ‘okay, I’m the rappity rap lady’ and people expect me to just do that. Then it started to feel like a box for me. I love rap, don’t get me wrong, but I don’t listen to rap as often as you might think—I love other genres. Being boxed into ‘real hip-hop’ and boom-bap isn’t the full picture — that sound just kinda happened. I tend to cling onto whatever appeals to me at every moment and working with Teckzilla (Str8buttah head), who’s amazing with that boom-bap sound helped with that. I’ve been shaking it up, anyway, just finding new things to do so I don’t get boxed in.

‘Marmalade’ sounds notably different from your previous releases. Was that an intentional shift?

Yeah, that was a conscious decision I made. I had already started to talk to Alpha [Ojini] before we got into the studio, we’d already had a couple conversations and I told him I was trying to work on something unexpected. I loved Alpha’s last project, ‘Chvmeleon’ it was sick, and Blaqbonez’s ‘Bad Boy Blaq’ was really sick too, so it just kinda made sense that he was the right person to work with since he was the mastermind behind those projects, and he was game immediately.

During that period too, I was also working on a project with Teckzilla—which I’m still hoping to drop soon—that still sounds a bit like me, but it’s different from what me and Teck usually put out. So, I was already conscious of still having the space to release the music people who know of me are familiar with, while also trying to shock people as well with this specific project.

I noticed you released this project independently. Are still with Str8buttah?

Definitely, Str8buttah is still a very big part of Phlow—they’re the reason Phlow is here in the first place. The last four projects released have been released with Str8buttah, but ‘Marmalade’ was strictly indie. The thing about Str8buttah is, it’s a production company and not a label, so all my previous projects were in collaboration with Str8buttah.

Making this project was one of the most challenging and interesting things ever. What would happen is, I would drive over to Alpha’s studio with a manual car that I’d just learnt how to drive—I literally had to always remember how to shift gears along the expressway. There was some drama involved with putting the project together, but the way we came up with songs was, I’d get to Alpha’s spot, he’d ask what vibe I wanted to go with, come up with the beat right there, and I would write on the spot. If you listen closely, you can hear him on the background of some of the songs as well.

Those were very interactive sessions, where we’d both contribute and bounce ideas back-and-forth, but 90% of the project was written and recorded on the same day, with no retakes. Then he’d work on them and send me the mixes to the songs. For example, a song like “Cheque” which a lot of listeners really like, we didn’t spend that long, I wrote on the spot and recorded. Everything was very on-the-spot.

From the outside looking in, this project feels like you hit the reset button. Do you feel that way at all?

Yeah, in a sense. I’m hitting the reset button, but my roots are still my roots in the end. Now, I’m more willing and confident to get on different types of beat, because even before the project dropped, I’d already started Freestyle Friday messing around with different beats. This project has sort of given me a big nudge, so definitely, it’s kind of a reset but I’m still going to stay true to my roots.

My favourite song on the EP is “Energy”, and it features Tomi Owo’s beautiful voice. How did you connect for that song?

I knew her through Alpha’s debut album [‘Half Price’], I knew she was a really really talented singer and artist. “Energy” was the last song we recorded, that was the only beat I found that Alpha didn’t make from scratch that I really liked. I recorded both verses and no hook, and we were looking for what to do and who to add. I know I sent it to a couple of other singers, but then Alpha was like, ‘yo, I know Tomi Owo’, and he felt like she was going to come up with something insane. To be honest, she made that song what it is. She was only supposed to do a hook but she added a verse as well, which was very sick. I think that’s my favourite song as well on the project.

There aren’t too many female rap artists in Nigeria. Do you sometimes feel any pressure to represent women in a male-dominated space.

I mean, whether I like it or not, I’m representing my gender in this music industry. I think about that a lot, and I also think about how women need to work together even more. When we band together, people will have to take us more seriously than they are now, instead of pitting us against each other. They always do that, though—look at Wizkid vs Davido—but working together and pushing each other up is the best way to get over all that.

0100
Previous Article Gems: A list of the best songs released this week

Next Article Rap Song of the Week: Odunsi (the Engine) & Maison2500 make a “wicked, sexy!” pair