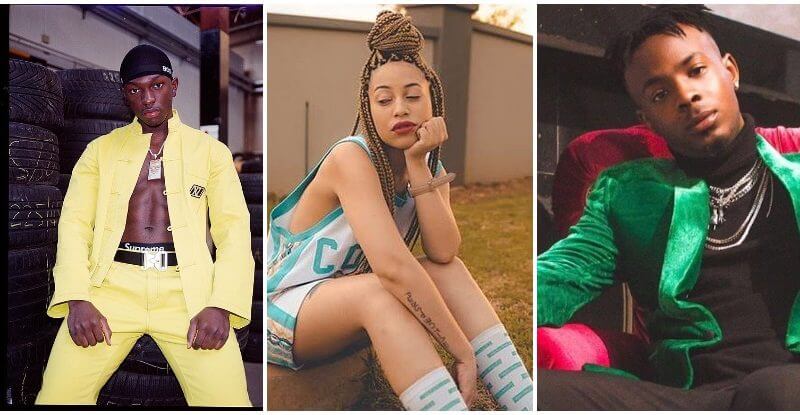 Last Friday, we brought you the long-awaited, Davido-assisted remix to Olakira’s summer hit, a collabortive single between Reekado Banks, Kida Kudz and EO, as well as new singles from L.A.X, Runtown and more. To get your week started, we’re recommending stellar new songs from Kida Kudz, Young Jonn, Rowlene and more. Dig in and enjoy.

Kida Kudz has happily kept the streets fed throughout this year. In addition to February’s debut mixtape, ‘Nasty’, the UK-based rapper has put out a consistent stream of loose singles and feature appearances. In addition to his stellar contribution to Reekado Banks’ “Need More”, last Friday also saw the release of Kida’s breezy new single, “Don’t Be Shy”.

Adopting a slick flow over warm piano chords and a frenetic bassline, Kida reaches into his softer side, singing of his affection and promising undying devotion to a potential love interest. While he’s better recognised for his ability to make machismo-driven bangers, “Don’t Be Shy” is a timely reminder that Kida has more dimensions to him, and he will always keep it catchy.

After years of being behind the boards, crafting hits with a lengthy roll call of A-list artists that includes Olamide, Naira Marley and Tiwa Savage, Young Jonn is seemingly ready to show us his chops in front of the microphone. “In Case”, his new single, is the first time Young Jonn places emphasis on singing as his primary role on the track. The song is produced by Phantom, whose screeching piano strings, horn harmonies and highlife-inspired bounce serves as the perfect backdrop for Young Jonn’s nasally vocals and preppy melodies, as he sings of transactional sex and the primary currency behind it: money. “Nna, one thing must kill a man o/e fit be woman, e fit be cash o”, he sings, choosing to observe rather than judge and it pays huge dividends, resulting in a catchy song with no unnecessary shaming or proselytising.

Kofi Mole is one of the many artists who use their prolific streak as an opportunity to constantly experiment and fine-tune their abilities. While he could be deemed as a rapper, the Ghanaian artist constantly shows range with each new, distinct single. His latest, “Makoma”, finds him playing at the intersection of Ghanaian folk and trap, as he delivers a boisterous romantic cut. Adopting a rugged rap-sung flow, Kofi Mole sets the song’s lively tone, and in doing that, he pulls a melodic flow from Sarkodie, while Bosom P-Yung’s goes into his bag of tricks for a delivery mode that borders on hysterical.

Rowlene has consistently shown herself as one of the more captivating voices on the continent, thanks to a radiant voice that can convey several emotions and slip into a multitude of sounds rather effortlessly. The South African singer is gearing up to release her sophomore album, ‘11:11’, in November. Kick-starting the rollout, she’s shared the intro track, “Stop”, as the album’s lead single, and it finds her in an assertive mood. Over brightly ominous keys and robotic bass synths, Rowlene pulls off an authoritative kiss-off that sees her cracking on a former flame, riffing on his fake chain and flat-out dismissing him. “I know that you’ve gotten used to taking from me when you stall on empty/don’t involve me now, it’s gotta stop”, she declares in a tone that’s as caustic as it is infectious.

South African multi-hyphenate creative lordkez introduced herself as a singer-songwriter with last year’s ‘Revenge Season’, a debut EP that established her as an artist with a preference for making emotive and deeply engrossing music. Last Friday, she followed up with her second EP, ‘Charcotta’, a 9-song that emboldens the cinematic quality of her music. One of the instantly striking cuts off the excellent EP is “Amnesia”, a deep cut with assists from Blind MIC and AYLØ.

On the song, all three artists recall a past relationship that took a toll on them, wishing away all the toxic memories that came with the experiences. “Hurt face all in my case, I don’t need you/sit back, always laid back, I’m sativa/act like I don’t know you like amnesia”, kez sings in the opening moments, letting out the flood gate for MIC and AYLØ to wax poetic about the PTSD they accrued. With each artists taking their turn on the mic over aqueous guitar and languid drum rolls, “Amnesia” is the musical equivalent of three friends venting to one another and bonding over a similar situation.

ICYMI: GET FAMILIAR WITH DRILL MUSIC FROM THE AFRICAN CONTINENT