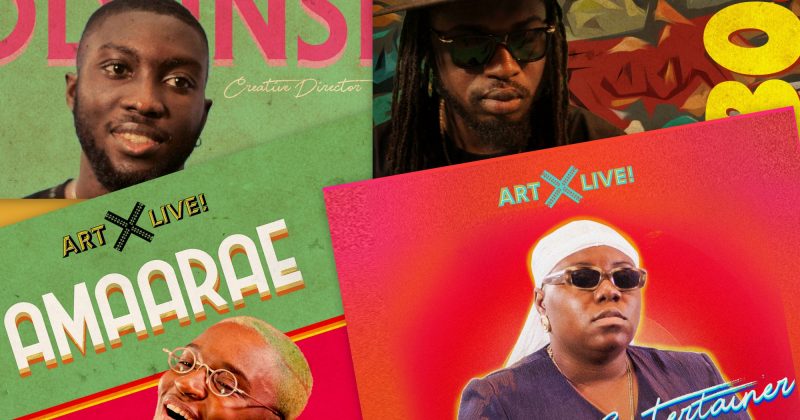 The NATIVE Exclusive: ART X Lagos is bringing the ‘Sonic Archives’ to life with Odunsi

It is important to come to terms with this before Saturday’s showcase because while he might not be physically on the stage, his vision will bring tonight’s headlining acts, O.G DRB group member BOJ, musical sensation Teni the Entertainer and Ghanaian wunderkind Amaa Rae, to life.

Odunsi recently released his debut album ‘rare.’ to critical acclaim in early October, surprising critics who feared that Odunsi’s adventurous experiments with electronica and extrapolations of contemporary Nigerian afro-pop while great as singles, would fail as a concept album.

UPDATE . #ARTXLive! We’re giving away tickets to our one-night only showcase of live music and visual art. This year, ART X Live! invites you to indulge in an electric exploration of Africa’s rich musical history with a celebration of our heroes past. . Tag a friend you’d like to bring along to ART X Live! in the comments section for a chance to win a pair of tickets. We will DM the lucky winners tomorrow. The winners are @adeogemua, @seuntyb, @jayjaysalam, @josh_adegboye and @iferolayo. . ART X Live! features @Odunsitheengine as Creative Director, with performances by @Bojonthemicrophone, @Tenientertainer and Ghanian singer @Amaarae, alongside works from visual artists @Chukwukanwobi @Tomisin_akins and @Fade.0707. . Proudly sponsored by @AboslutNG, #BudweiserNG, @TraceNG and @TheBeat999Fm. The show will take place on Saturday, November 3rd at The Civic Centre in Victoria Island, Lagos. .⠀⠀⠀⠀⠀⠀⠀⠀⠀ .⠀⠀⠀⠀⠀⠀⠀⠀⠀ #ARTXLagos⠀⠀⠀⠀⠀⠀⠀⠀⠀ #ARTXLagos2018⠀⠀⠀⠀⠀⠀⠀⠀ #DestinationLagos

“I first got the call to work on this in August,” Odunsi tells me as I chat with him after listening in on his rehearsal session with Amaa Rae. “I worked on this at the same time I was working on the album so it wasn’t like I jumped from that to this.”

And it shows, in the showcase’s overarching theme of nostalgia; the driving force behind ‘rare.’. Both album and showcase are engineered to evoke nostalgia and perhaps exploit it, piggybacking off the familiarity of childhood and our collective inability to separate our attachment to our formative memories, from the events and memorabilia of those eras to offer us a hybrid that is entirely its own thing. What separates his album from Sonic Archive, his performance piece is that he is channelling this nostalgia through three very distinct artists.

He tells me about BOJ, Amaa Rae and Teni, who are so different from each other, attempting to thread their individual styles into a cohesive whole already feels like a boast. As part of DRB, BOJ helped found the underground movement that would eventually serve as launching pad for Odunsi. Teni the Entertainer literally went viral on the back of a freestyle on her Instagram profile and Amaa Rae won herself a rabid Nigerian fanbase thanks to a verse on a Nigerian singer AYLØ’s “Whoa” with an unforgettable line about ass play.

“They get to imagine what kind of artist they would be if they started their careers in these eras,” Odunsi explains to me when I ask what the sell is. He also adds that Amaa is the first artist not from Nigeria to perform at Art X.

Ayo Lawson, project manager for this part of the Fair, informs Amaa Rae is also opening the show Saturday. We whisper back and forth as she gently conducts the Nigerian band provided for the artists through an electric performance of “Fluid”, her sleeper hit from her 2017 EP, Passionfruit Summers. The album was long awaited after the AYLØ verse, and a couple of singles began to draw comparisons between Amaa and established R&B and Soul greats like Maxwell and Rhye. The project itself was hard to place, its influences came from established canon and experimental genres like EDM and nu-soul, its themes flitting between abstract and vulgar, each discordant piece anchored by the ephemeral pull of her breathy falsetto.

That falsetto proves itself yet again as ‘Fluid’ morphs from electronic torch song to space rocker ballad with insistent guitar riffs. This new version is sure to resonate with the much older crowd that makes the majority of the Art X audience.

I am just as fascinated by the band. The two guitarists (one rhythm, one bass) and pianist are the unobtrusive machines behind these performances, driven by a half-showman/half-drummer whose flourishes on the drums are only matched by his sensual body rolls. He is able to shed the anonymity of the traditional backing band and command attention while I am only privileged to see them respond to Amaa’s urgings, I am curious to see how their energy will change with Boj and Teni.

Ayo tells me there is a level of deliberation behind the choice of nostalgia. Boj, Teni and Amaa were chosen for their brands, distinct and evolving, their unique points of view and their career trajectories that suggest they are well on their way to becoming the legends they will honour Saturday. Amaa confirms much of this when I corner her for a few minutes and lets it slide that she is performing a cover of Ghanaian anthem “Ahomka Womu” by boy group VIP. It is one of three songs she’s performing aside “Fluid”.

“I wrote a third one, ‘Let It Flow’ specifically for Sonic Archive,” she explains, “I took lyrics from one of my pre-existing songs and wrote a whole new hook around it.”

Amaa Rae has been very deliberate with public performances this year, and save for the July Festival in Ghana, she has had a measure of control in the events where she shared her music. But Art X is the kind of challenge she feels she needs to grow as an artist. And she has grown quite a bit already; having to work with a quarter of the time the other artists had with the backing band, writing three songs with Odunsi and reassessing her oeuvre to fit into the vision of Tokini Peterside Art X’s director.

“I think I am going to be forced more to be demonstrative in one space,” she tells me, when I ask what she thinks will be the big hurdle she’ll need to conquer Saturday.

“With a bigger stage, in the shape of an ‘X’ no less, I can’t just walk into the crowd and interact. I will have to be a showman, Saturday. I can’t rely on the crowd, I’ll have to create the experience entirely for them. I’m terrified, but I’m excited.”

And there is reason to. Of all three of Saturdays acts, Amaa is the least known, and is opening the show to a live audience, notorious for voicing its displeasure at what it considers less than perfect. After listening to Amaa put her surprisingly hip-life spin on “Ahomka Womu”, slurring down the sound and infusing it with an unexpected but hard to ignore sensuality, I have no such worries for her.

A celebration of the diversity in the music industry, energy, electricity and nostalgia, served without artifice is what I expect from the Sonic Archive. We have long been denied the permission to look back fondly on our collective youth and Saturday Odunsi will get a chance to lift that veil.

0000
Previous Article The NATIVE Exclusive: Nnedi Okorafor on Africanfuturism and the challenges of pioneering

Next Article We are calling it early, but Afropop is revolutionizing the sound of popular music