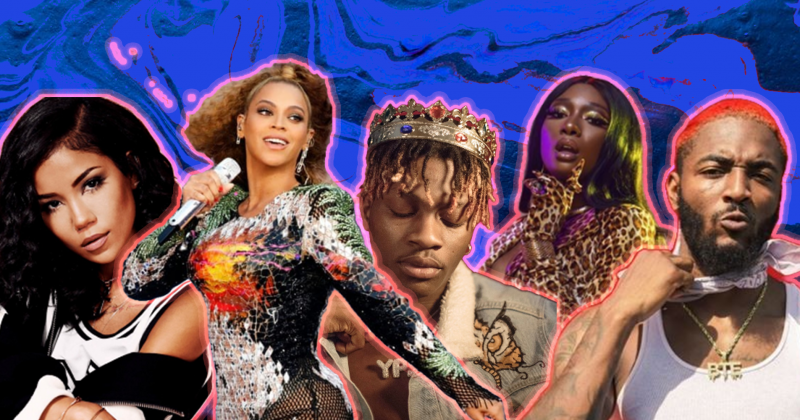 How music can help increase your self-confidence

There are several immeasurable benefits of music consumption. Not only does it have the ability to give us hope, healing and make us feel safe enough to release negative feelings, it also gets us turnt or happy with each harmony that swells and shimmers within us. There is definitely an inexplicable connection between music and our moods, and there’s just something about an artist baring out their deepest thoughts that just seem to strike a chord with anyone who’s listening closely.

In 2017, Complex posted a study that discovered the connection between music and the healing of neurological illnesses through the wonders of hip-hop/rap. Music has long been understood to be a cure for both the artist and the listener, so much so that it’s taken on life as a form of therapy. I can confidently say that found a lot of my self-confidence through music, and if you’re anything like me, you’ve always depended on music to take you out of your low moments. I had a small stint with songwriting and rap once upon a time, and now that that dream is over, I have always found cathartis through either writing or through consuming music.

Anyone who has been through uni will understand how difficult the last stretch is, and I spent mine soaking up some much needed Megan Thee Stallion. Her 2018 project ‘Tina Snow’ is a window-quaking affair, filled with off-the-cuff raps and punchy one-liners that have flooded Instagram captions worldwide and started many a TikTok challenge. Megan’s music benefits from her confident delivery, which weaponises misogyny through the execution of profane boasts, which challenge the status quo. Listening to the project will make you go from inadvertently twerking to sticking up your imaginary thigh-high boots to kick anyone who’s trying you to the curb.

There’s something incredibly endearing about hearing Megan belt out the words ‘I’m holding my pussy like a weapon/Cocky as fuck, Bitch you know I’m conceited’ that puts a spring in your step, makes you feel like you want to be like her, say whatever you want to say to anyone and flout the rules. Her recently released project ‘Suga’ is filled with quips that make you want to adopt the self-confidence she exudes. This is evident from songs like “Ain’t Equal” which say: “I’m dedicated, this my passion in me, can’t nobody take it” and “Bitch, I been popping, doing numbers, been lit” to her declaration of being multifaceted on the TikTok sensation, “Savage” where she says she’s “classy, bougie, ratchet. Sassy, moody, nasty”.

On the polar opposite of Megan’s in-your-face bad bitch persona on ‘Tina Snow’ or ‘Suga’, is an artist like Jhene Aiko whose soft music is always emotionally layered. She’s not rapping about changing a new nigga every week, but she’s evoking the same confidence in her music that adds a little shine to your day and gears you up for what life throws at you. Her latest album, ‘Chilombo’ incorporated crystal alchemy sound bowls, which produce an extended vibrational hum with the hopes of unblocking different chakras in addition to the lyrics which will do so when you actually reflect upon them.

On “Speak” she sings about finding herself and her confidence again after leaving a toxic relationship. ‘Speak from my heart, baby Speak from my soul, suga/ Act like you know who you are, speak be free’ she chants, with each lyric empowering women to drop all their worries about what others might think, and start living each day for themselves. Elsewhere on songs like “Born Tired”, she validates your innermost feelings, which self-criticism won’t let you access on your own, with encouraging lyrics like “look at how far you have come, look at all that you have going, look at who have become, baby you gotta keep going”. Last month, we spoke about the importance of women speaking their truth in their music, so that we can reduce the chances of being ignored and have our voices heard when we are mistreated by society.

When you listen to an artist like PrettyBoy D-O you get the same feeling, a strong burst of adrenaline coursing through you and filling you with so much confidence and assertion. The best music is the kind you can feel, and this is what D-O’s infectious energy on his songs benefit from, the ability to make anyone feel what he’s saying. Whether it’s cancelling out the bad vibes on the Sugabana-assisted “Terminate” or making sure the naysayers get an earful on “Dey Go Hear Weh”, D-O’s music connects with listeners and calls them to action.

When Psycho YP dropped ‘YPSZN2’, two songs that stuck with me the most were “OPPS” and “City of Kings”. These braggadocious and profane boasts can gas you up and fill you with all the confidence you need in the face of . It reminded me a lot of Rick Ross’ music, which if you’re familiar with, you’ll know has made him respected as a boss or a don. He revels in the security and relief of being extremely wealthy, exuding so much self-confidence with lyrics such as “I’ll go to the grave before I be a bitch nigga” in his husky voice, which almost commands you to follow suit. In that same breath, listening to artists such Jay Z or Meek Mill – who rap about overcoming their low self-esteem with intricate details about their past experiences juxtaposed by all the riches they have now – will make you want to level up like them as well.

Similarly, if you listen to Beyoncé’s “Feeling Myself” or “Flawless”, you feel strong and free of any self-doubt you were feeling before you pressed play. The message of female autonomy and inherent authority without the pressure or even consideration of appealing to the male gaze is powerful. You feel like you are on top of the world, and that’s mainly because Queen B said so and how can she be wrong about that? This is why Beyoncé rapping is so revered because the few times we see her in this form, she evokes so much confidence and conviction that you believe everything she’s rapping about even if just for a moment.

The amount of confidence an artist evokes lies mainly in how they present themselves and what their personal brands are associated with. Beyoncé is known for being THAT b*tch, Megan is so sure of herself that you wonder why you don’t feel the same way about your own self, D-O’s carefree nature is kind of a magnet for other people like him who are now known to do things like rocking up to concerts armed with cutlasses and machete’s (please don’t try this at home, it’s just bants). These artists have personalities or brands they have built their entire career on, and this feeds into the music they make and subsequently the feelings they invoke in listeners.

As we all navigate through unprecedented times, music has been a form of escape for many of us. Now, that life as we know it has changed so much and what we know has pretty much been drawn to a halt, listening to music has become a means to feel better about myself and the reality of the world. There’s so much uncertainty to drown out, and I’m listening to these songs more closely, taking in the subtle message that everything’s going to be okay ‘even in my years to come I’m still gon’ be here’ like Destiny’s Child would say.

ICYMI: Music is the cure for the cabin fever we’re all feeling

Next Article NATIVE Exclusive: It’s Adey’s time in the limelight