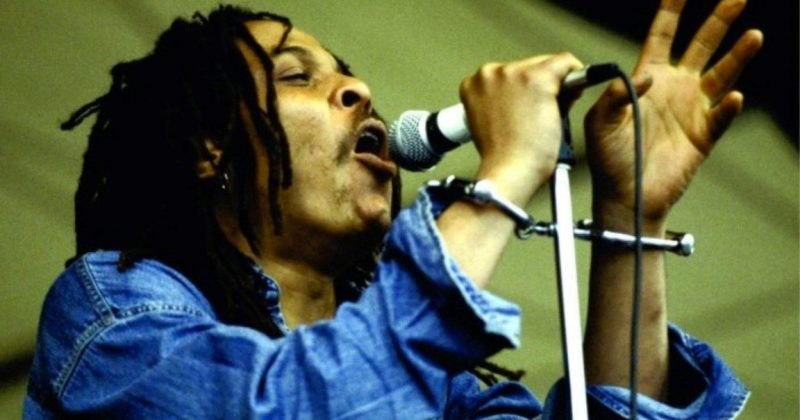 Even though my respiratory system is easily prone to illness from exposure to cold, I’ve always found being in the rain to be quite liberating. I remember a few times in uni when the skies darkened and droplets of water would begin to pour, instead of seeking covers I’d continue playing football with guys who clearly had a better tolerance for the weather. That same night, or the next morning at the latest, the effects of my choice would predictably and painfully begin to manifest, but I don’t recall ever ruing my decision to throw caution into the wind.

I’d be lying if I said I’ve had any profound, rain-related moments with Majek Fashek beyond classic 1988 single, “Send down the Rain”, but thinking about it now, it perfectly encapsulates the carefreeness of standing, running or doing any under playful activity in the rain. It might cause a coughing fit, difficulty in breathing for a while or even graver consequences, but being in the rain can be an act of living in the moment and enjoying what’s happening right there in front of you. Recorded during a period of low rainfall in Nigeria’s south-south region, “Send down the Rain” was more than a plea for the heavens to open, it is, on a visceral level, a personification of the unfiltered joy rain can bring as an experience.

As a younger millennial who knew of Majek Fashek and didn’t get to experience him during his peak in the late ‘80s and early ‘90s, a song like 2Baba’s “Dance in the Rain” is a bit more fitting as the soundtrack for my trysts with rain. The thing about timeless music, however, is that it’s never too late to fully appreciate it and find new meanings. “Send down the Rain” is as evergreen as music gets, and it’s one of those songs several generations of Nigerians are familiar with, whether they experienced its smash success first-hand and the ensuing myth that christened Majek, “Rainmaker”.

Growing up with parents who were only interested in playing the “classics”, I was very familiar with Majek’s signature song, but my first time actively and voluntarily listening to the singer as an adult happened through sampling. In late 2015, Nigerian rapper, Boogey dropped his mixtape, ‘Irregularly Scheduled Program’, and on it was the standout selection, “Say Amen”, a prayer-filled cut that was carried by a warm reggae-folk instrumental, which I later found out was a sample of Majek’s “Holy Spirit”. That served as my gateway into ‘Spirit of Love’, the legendary singer’s international major label debut on Interscope Records.

Released in 1991, ‘Spirit of Love’ captures Majek, with the support of his band, the Prisoners of Conscience in sublime form. Musically rooted in reggae, with visible Yoruba folk influences, and championing the Rastafari beliefs of freedom and world peace through a pan-African lens, the album is a compelling combination of socially aware music and evocatively arresting rhythms. Loading his music with a message was Majek’s mode of operation on his three previous albums, and it continued until his final album in 2017, ‘Weep Not Children’, which features a 2Baba-assisted remix of “Holy Spirit”.

In the enviable league of Nigerian artists who spoke truth to power, though, Majek was unique in his own brand. He wasn’t as satirically blunt as Fela or as humorously surgical as Lagbaja, but what made his music so potent and instantly attractive, was that he proselytised using hope. With a voice that communicated vigour by cutting through the pain, and poignant writing that sounds inspiring even at its most pedantic, Majek prioritised the bigger picture of a brighter future, without undercutting the tension of a world suffering from racial injustices, or Nigerian society struggling with civil fairness and economic difficulties. Since these issues are still very prevalent, Majek’s most enduring legacy might be his optimism, especially in a time when it’s all doom and gloom.

If you’re a person with a beating heart and any common human decency, the events of the past week have been extremely difficult to manoeuvre. The news cycle and timeline feeds have constantly given us reasons to wince in agony and heartbreak, shifting the focus between gender-based violence and police brutality. We learnt of the death of the teenager, Tina, at the hands of police, reports and accusations of sexual violence have been coming fast and in vivid details, and the world got to see another unarmed black man getting murdered by the police—all of this has happened against the backdrop of an actual global pandemic.

Perhaps the most foreboding part of this unfortunate series of event is that, we’ve been here before and it never seems to get better. In usual fashion, these reports have been rightly met with outcries, outrage and protests, but at the moment, it feels like a revolution is about to change the course of things as we know it. We’ve seen a man leverage privilege into support despite indicting himself as a rapist, the family of a sexual assault victim is currently being denied justice due to the ineptitude of our policing system, and a country is brutalising its citizens for protesting against race-motivated injustices, with support from its president.

This is the video of Uwa’s sister talking about the police and their reaction to her sister’s death. pic.twitter.com/Lo5dgqGAKJ

Under these circumstances, optimism is quite a luxurious commodity. Obviously we want things to get better, which is the reason for our outrage, but the contradicting forces in our society makes it difficult to truly believe things are going to get exponentially better anytime soon. In fact, if you’re a Nigerian who’s pragmatic enough to gauge the rot of society – which has an alarming poverty statistic; is morally bankrupt and socially vindictive despite placing a premium on puritanical values and also has been saddled with leaders who exploit these same defects rather than fix them – it’s easy to tread into hopelessness because nothing really gets better around here.

Regardless, that’s the task we’re faced with if we want something to change— to challenge the idea that nothing really gets better around here. “There’s work to be done, Africa”, Majek sings on the rallying anthem, “So Long Too Long”, a call to duty that’s as urgent today as it was when the song was released three decades ago. It might sound like some sanctimonious BS, but the fact is that we are all responsible for the change we desperately want to see. Even though our society makes it easy to feel helpless, we have to hang on to hope wherever we can find it so we don’t lose sight of the reasons we’re outraged.

The stereotype is that Nigerians are a self-serving people who only care for their personal needs, and as true as that is, the displays of collective annoyance and communal support is proof that many of us want a better, saner and safer society. With the odds stacked up against us, being positive is the only motivation to continue chipping away towards a brighter future. That’s what Majek Fashek represented in his music; he spoke the language of optimism while singing of the daunting challenges of rebuilding society for the better.

By default, I’m not a very optimistic person, however, I also hate to think that things won’t ever get better. Following the announcement of his sad passing in the early hours of Tuesday, June 2nd, 2020, and in light of the crazy events of the past week, listening to Majek’s music feels like tapping from an inexhaustible fountain of hope. Even though he had a rough fall from grace and his powers as a musician considerably waned as he battled personal demons, we should remember him as an artist who spoke truth to power in the form of empowering, optimistic hymns.

We should honour his memory by drawing inspiration from his visions of a future that’s free of police brutality and any other forms of oppression. Our society has been burning for a while, and we have to anticipate or at least create the conditions for the rain that changes the tides of things.

Next Article Examining the societal structures which enable sexual assault