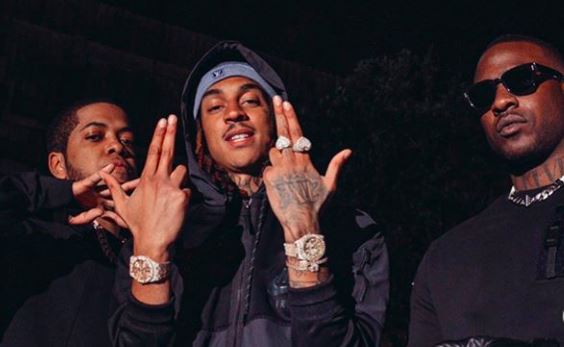 Skepta, Chip and Young Adz have made careers from spinning intricate tales about their lives and giving the world a glimpse of the streets in London. We all know Skepta and Chip have been in the game for the past decade, spearheading and setting the pace for then UK’s now mainstream grime scene, and they have now brought their OG vibe with the younger artist, Young Adz who rose to greater prominence over the last three years. Having all contributed to grime’s recent global appeal, the trio’s collaborative album, ‘Insomnia’ is very important especially now when we all need new music.

‘Insomnia’ is Skepta’s first full-length project since he released ‘Ignorance is Bliss’ last year, while Chip is returning from his 2018 album, ‘Ten 10’ and Young Adz is following up his former group, D-Block’s 2019 album, ‘Street Trauma’. At this point in each artists’ career, they’re above chasing the hits. Skepta and Chip’s artistic evolution has reached an arguable peak, where their previous projects have made a notable mark on the grime scene, and made fans out of international megastars like Drake, A$AP Rocky and many others.

Skepta opens up the album with his verse on “Mains”, which introduces the assertive tone of the project. Over the mix of 808 drums, synth harmonies and flute samples, Skepta, Chip and Young Adz take turns bragging about their success, whilst reminiscing about the tough times before they blew up. Young ADZ’s melodic vocals make the song’s catchy hook, while Skepta takes the reigns on the next track, “Golden Brown”, an undoubted standout from the album which shows off each artist’ range.

‘Insomnia’ was welded by a group of producers from UK and America who bent elements of trap, grime, and pop into sparse soundtracks for the club undergrounds. “Golden Brown” finds them dipping their toes into a more sultry r&b vibe which you typically wouldn’t expect from Grime artists these days.

The project’s lead single, “Waze” was produced by Cardo, an American producer who was instrumental to the production on albums like Baby Keem’s ‘DIE FOR MY BITCH’, Travis’ ‘Astroworld’ and Kendrick’s ‘Black Panther’. On “Waze”, he mixed the eerie harmonies of trap music with bass drums which serve as the perfect sound bed for Skepta, Chip and Young Adz’s aggressively boastful raps, where they lay particular emphasis on their statuses as OGs in the game.

Elsewhere, London-based producer, Scott Styles produced the catchy trap beat for “Demons”, where the whistling riff he incorporates into the beat stands out for D-Block’s reunion. Dirtbike LB joins the trio for a reflective song about their motivation to change the lives of the people they hold dear.

Most of the tracks on ‘Insomnia’ benefit from the intricate production work. On “St Tropez”, Skepta’s shows off his skill and impeccable ear by sampling M.I.A’s 2009 hit, “Paper Planes”. DaBeatfreakz also gets to flex his muscles with the quick-paced drill beat for the emotive “Star In The Hood”, where the rappers reflect upon their steady incline and how far they have come.

Given this, songs like “Traumatised” continue this narrative and set the tone for the rest of the project, where they get deep and address the effects of their hostile come up on their mental health today, even now that they have made it. “I’m close to the edge so please don’t push me” Skepta explains before he speaks about the people he’s lost, the things people did around him that have left him traumatised and on edge, while Chip reveals the little ways he seeks joy in these times; “I pray a lot like heavenly father can you help me? All this weed and all this liquor, so unhealthy.”

For the rest of the album, the vibe is slowed down with hard hitting bars about the harsh reality of the streets they came from, and the effects violence has on society. By the end of the album, each artist gives us more insight to them as people, making the album seem like a love letter to grime. Each artists’ steady incline has been a result of the music changing their lives, which serves as a warm and welcome reminder of what’s important.

Though they have different strengths—Young Adz’s innovative flow, Skepta’s technical precision and Chip’s lyrical dexterity – they all come together quite nicely, and complement each other perfectly. It’s going to be a quiet next few weeks around here, so what better time to meditate to reflective music like this?

ICYMI: Why it’s important to have quality cyphers in Nigeria’s rap scene

Next Article For the Girls: Sampa the Great is making empowering bops for black women