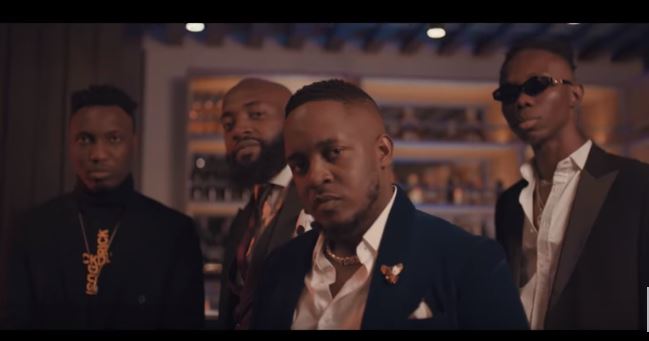 If you talk to anyone who’s privy to its inner workings of the music industry, or even just pay close attention, you’ll find that personal egos and an unwitting sectioning are major roadblocks to the growth of Nigeria’s commercially struggling (English) rap scene. An unwillingness on the path of rappers and relevant stakeholders to work together towards a fruitful end, has sort of stunted the genre from sustaining momentum and growing upwards rather than sideways. This is why when collaborative efforts do happen, it’s important that they’re executed on a compelling level.

As an informal means of collaborating, rap cyphers provide a no frills avenue for rappers to show off their abilities amongst their colleagues. Unlike joint records or posse cuts, cyphers disregard typical song structure entirely, and focus only on freestyled verses which aren’t bound to a common theme. Given this, featured artists are able to really show off their skill, and emphasise upon a varied mixture of looseness and friendly competition. In these parts, however, participating rappers deliver written raps or go off the cuffs over a single beat, only bothered by their lyrical content and technical precision.

The equally—if not more—important part of rap cyphers are those behind the scenes. Since cyphers are put together in audio-visual mode, the organiser(s) are responsible for everything that is necessary for a well-executed cypher. These responsibilities include picking the right beats, audio mixing, picking the right location and set, video editing and selecting the right set of rappers to form a relatively compatible collective on camera. Once any of these factors goes awry, the balance of the cypher is thrown off, effectively reducing its enjoyability.

Take the recently released pilot of MTV Base’s cypher series for instance, which would have been a striking entry into their new, commendable endeavour, save for a few missteps. Shot in what looks like either a car garage or car storage space, the brightly lit set is eye-grabbing, and the quartet of Shakez, Alpha Ojini, Hench and Timi Kei all look like they belong in front of the same camera. Where the cypher falters, however, is in the audio editing. If you press your earphones in or turn up the volume significantly, you can hear the slick wordplay in each rapper’s lyricism, but it is almost impossible to feel the passion behind their delivery.

With all the verses performed and taped live, we definitely needed them to amplify each rapper’s voices in post-production. With the exception of the immaculate Timi Kei, who raps like he’s walking on water, performances from the other rappers were bogged by section cuts and censored words. In a setting where listeners expect a no-holds barred approach from the rappers, removing parts of a verse without any subtleties and glitching out certain words and phrases are difficult, almost inexcusable bumps that derail cyphers rather than enhancing them.

Considering that this a relatively new move by MTV, the hope is that the series will get better with subsequent episodes, even if history shows that’s not really the case around these parts. At the moment, the Hennessy cypher is the only long-running cypher series we have in Nigeria, and while the cognac brand behind the series deserve a lot of props for keeping the cyphers alive for the last five years, it’s definitely due for a revamp. In its past three editions, the cypher has gone from a highly anticipated event to something many rap fans are weary of watching.

Their latest of the annual series was the straw to break the camel’s back, from the uninspiring beat selections, followed by the lacklustre bars they inspired. Their 2019 edition wasn’t well-received by an audience who was expected a spectacular showing, and for good reason.

At the beginning of last year, Loose Kaynon, A-Q, M.I Abaga and Blaqbonez united for the first ‘Martell Cypher’, delivering one of the most talked about events in Nigerian rap music in recent memory. Although with pre-recorded audio verses, the Martell Cypher was a masterclass in packaging, and as a result recieved instant fanfare and sparked rap conversations for several days after it was dropped. With the success of a seemingly new rival, rap enthusiasts hoped the Hennessey cypher would step up to match the odds, and when they didn’t, it made sense that M.I and company returned for ‘Martell Cypher 2’, a sequel as equally impactful as the first.

In comparison to consistently churning out exciting albums and successful singles, cyphers might seem transient, but in the grand scheme of things they’re quite valuable. While the ones featuring the more prominent rap artists are important in creating moments of visibility for the genre, cyphers featuring lesser known rappers should serve as compelling discovery points and indicators that there’s a boatload of talents brimming just beneath the surface.

A stellar example is the first set of Coronation cyphers that were released November. Curated by Chocolate City-affiliated imprint, 100 Crowns, one of the sets featured five must know, up-and-coming rap artists, while the other focused on the battle rap scene. Both cyphers have been viewed over 20,000 times on YouTube, cumulatively—not too shabby for videos with only a few familiar names. In a smart move, the cyphers were released a few days to the latest edition to the Coronation, stoking hype and leading into the best instalment of the hip-hop-centric event series, till date.

Without the right heads and hands behind the scenes, shoddily executed cyphers have an unwelcome, negative effect for a scene that needs as many wins as possible in Nigeria. It would serve the industry well to integrate more rappers who rap in their native tongue, for variety and wider appeal beyond ‘hip-hop heads’, but that’s a discussion we’ll have another time. What is needed right now, though, are properly executed cyphers that aid the growth of the Nigerian rap scene.

You can watch the Coronation cyphers below.

Next Article NATIVE Exclusive: Exploring the communal magic of WeTalkSound