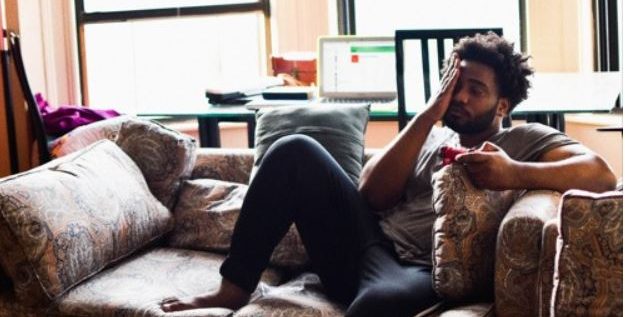 Mafeni is a musical hermit of sorts. After dropping his excellent debut EP, ‘Enjoy’, back in 2016, the rapper seemed to disappear just when he started building momentum. On occasion, he’d come out of his cave for the rare feature or loose single, which we took to mean that Mafeni has been refining his craft, and very importantly, living his life to the fullest. The two are interdependent, because Mafeni’s music, as much as it showcases his incredible skill, also has a lived-in feel which makes his songs relatable.

‘3P’, the rapper’s latest release, is not quite as pesonal & introspective as his previous work, however, as a way of easing himself back into putting out projects, the 3-song EP has an acquainting charm, which makes it a necessary (re-)entry point into Mafeni’s fairly sparse catalogue. “How I been? I been feeling great lately/and I got some music on the way, baby”, he happily proclaims on intro track, “Shuturmouf”, acknowledging his absence and giving listeners a quick look into his clear headspace.

After the painful loss of Mac Miller in 2018, Mafeni shared “growing pains”, a loose single where he gave an honest depiction of his fight with his inner demons, and the difficulty of waking up each morning. Reflecting that he’s in better spirits, ‘3P’ is a celebration of life, of being a young adult with dreams and endless possibilities to aspire to. “This one’s for my niggas who ain’t smiled in a while/when life gets you down, stunt on them with a style”, he raps on “Shuturmouf”, after which he launches into a flurry of sharply written bars—“spitting marble flows and they all versatile”—as a way of showcasing that there’s no rust in his pen.

‘3P’ also deals with a prominent theme in Mafeni’s catalogue: friendships. Whether it’s his hesitance to tell friends about his issues or warning others to stay off fair-weather friends, Mafeni has always been vocal about keeping the right people around, and he continues to do so here. “Friends” is a straight-up diss to fake friends, where he sings, “I hate them, I spray them with my ray gun” on the hook. Ending the EP on a positive note, Mafeni does a 180 on the final track, “Special Request”, where he evokes an atmosphere where trusted friends gather to get lit. “Come through, we like to get rowdy/we say that shit proudly, we smoking that loud-y”, he chants over Le Mav’s glistening keys and lazily infectious drums.

As usual, Mafeni’s vocal delivery on ‘3P’ effortlessly transitions between rhythmic flows and buttery melodies within songs, which make the tracks more relatable. his lyricism an accessible feel. His beat selection also serves to flatter his voice, like DOZ’s foggy organ keys and thumping bass on “Shuturmouf”, which match the assertive nature of the rapper’s vocal tone. Within six minutes, ‘3P’ only allows for striking, repeat-worthy music that puts all of Mafeni’s best abilities on full display, with an implied promise that there’s more to come from the supremely talented rapper in the near future.

ICYMI: ‘GOLD’ IS A STUNNING DEBUT EP FROM THE TALENTED DUO, TAY IWAR AND LE MAV

Next Article Rap Song of the Week: J Molley & Ka$hCpt’s “Narco” is bubblegum trap at its most addictive