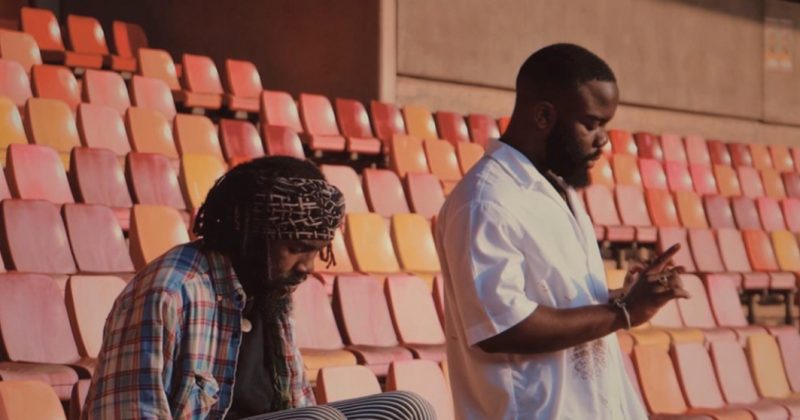 Essentials: ‘Gold’ is a stunning debut EP from the talented duo, Tay Iwar and Le Mav

Earlier this year, Tay Iwar released ‘Gemini’, his stunning debut LP under the Soulsection imprint which housed standout cuts “Fools” and “Stranger” produced by 80s sound proudcer, Le Mav. With the producer-artist chemistry they shared on these earlier songs, it is no suprise that the pair have formed a new band under the moniker Gold and released their eponymous joint EP last Friday.

The stunning 8-track project from the talented duo spotlights more of Tay Iwar’s sonically charged vocal abilities and his knack for murdering any beat he is given. ‘I literally just chose what I liked. That’s how similar our tastes were’ admits Le Mav, revealing to me how easy it was to make beats tailored for the Abuja-based Soulsection artist.

The project opens with “Seal”, a flamboyant cut on which Le Mav taps into the summery vibe of dancehall, which is deeply sated with heavy bass drums and lightweight supple guitar riffs. ‘You’re sexy and my life is wavy/All I see is golden’ comes Tay Iwar’s rich silvery voice, setting the free, spirit-filled tone of the entire project which seems to centre on having a good time above everything else.

On “Champion” Le Mav opts for a more mellow beat, as he ditches the summery vibe of “Golden” and switches the track’s direction to a pitched-down drum-led beat which provides the perfect backdrop for Tay Iwar’s more suggestive lyrics. ‘Tell me how everyone’s tryna put me down/but it’s your waist I be calling all season’ he sings, addressing an unnamed muse who throws him off balance with her salacious body movements.

The project’s two pre-released singles “Heat” and “Golden” follow each other sequentially, with “Golden” being a bouncy, conceited cut that addresses a breakup caused by Tay’s new found fame and resulting ego while on “Heat”, the focus is on the carefree, hedonistic lifestyle he is currently entangled in. This hedonistic approach to life follows through on “Ricochet” a catchy number on which Tay sings , ‘Life is forever/I don’t need forever’ as he realises problems don’t ever go and turns his focus to making money and living in the moment.

The tempo begins to pick up on “Gun Fighter” which sees Le Mav tapping into catchy, upbeat drum and percussion sets primed for dancefloors. ‘Waist killer she don’t believe/Bad girl you can put that work in’ Tay Iwar sings, suggestively singing about enchanting women he encounters on the dance floor. Esskay joins Tay Iwar for the song’s uptempo hook, ‘I hit her with the gunfighter’ comes his husky voice as he delivers a stunning verse that sure to get everyone moving.

The project closes with “Karma” which Tay Iwar uses to deal with the consequences of his carefree actions. ‘I-I-I don’t need bad karma anyway’ he sings over the bouncy, bass-drop beat Le Mav produces. Tay Iwar addresses a past lover, who he says changed overnight as he tries to free himself of the guilt attached with leaving her.

At the end of the short-but-sweet project, we’re left wanting more from the producer-artist duo, ‘Gold 2 is already in the works’ Le Mav makes known to me, determined to make their band, Gold a stunning powerhouse that can rival all other producer-artist pairings.

Next Article NATIVE x Eat.Drink.Lagos have collaborated to bring you NATIVE Eats at NATIVELAND19