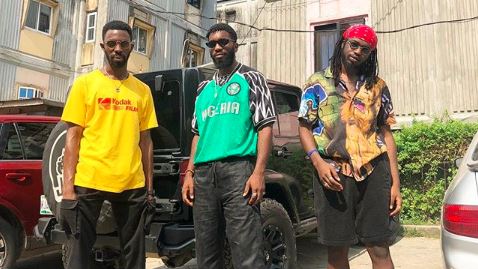 The DRB crew are patriotic Nigerians on new single, “Based On”

Being Nigerian can be a tough pill to swallow when you think about the hardships in the country and the awful stereotypes foreigners form of us as a result. The entertainment sector, however, seems like the only positive thing about the country with artists representing the nation proudly. DRB’s latest single, “Based On”, continues the streak of good media promotion for the country through music as the trio perform a tribute to the tenacious spirit of Nigerians.

GMK produces a laidback beat for “Based On”, setting a mid-tempo groove with a mix of synth harmonies, percussion and a bouncy drum riff. Fresh L’s opening rap verse portrays the harsh realities on the streets and how it inspires him to work harder, but the hook BOJ and Teezee perform retains the lightweight allure of mainstream Nigerian pop music with familiar and repetitive lyrics that retain the song’s theme; “Based on kpakpakpakpa/ The girls dem yapapapa/ They say Nigeria jaga jaga/ But I still dey scatter scatter”. Teezee’s closing verse also celebrates the opportunities that exist within the country as if to encourage listeners not to give up on their dreams.

Stream DRB’s “Based On” below.

ICYMI: Listen to “Alte” by the DRB crew