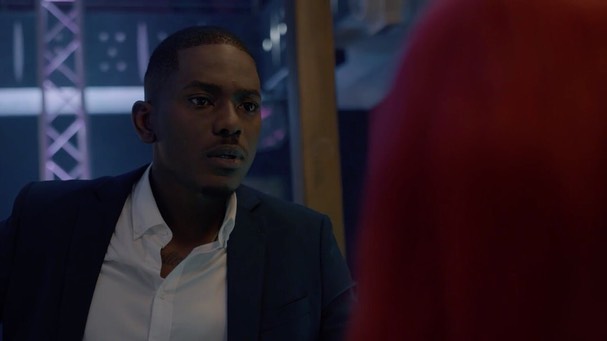 “Get Out Ya Feelings” by dndSection

dndSection’s new ‘Love Lies Bleeding’ tape offered a day to day detailing of the lifestyle of a young hustler. The Atlanta based rapper has shared the accompanying video for one of the project’s standout track, “Get Out Ya Feelings”, where he takes offensive shots mocking his opposition. ILYAONTHEFLY directs the music video with a simplistic direction that highlights dndSection’s thuggish intentions. The rapper is seen dominating his street, bullying a light-skinned dude in some obvious remake of scenes from Chris Talker’s famous “Friday” movie.

Travis joined the duo of Young Thug and Gunna on their “Hot” collaboration, from the former’s new album. He auto-tuned verse turned up the heat on the already accomplished hit record and they recognize its impact through an accompanying music video for the remix. Performing their verses while seemingly sitting in fire, the music video for “Hot” plays out as a tribute to the three artists’ penchant for making commercially successful songs.

Pop songs have a reputation for being lightweight and dense, but Adenike channels it expertly to power her googly-eyed romantic new single, “Ride”. Produced by GB, “Ride” is set to the mid-tempo mix of percussion harmonies, synths, guitar riffs and a groovy xylophone sample that gives the song a dancefloor attribute. The music video Fli5star directs sticks to the romantic script provided by Adenike’s sultry vocals as it captures her performing her confessional lyrics while clips of her falling in love with a basketball player and going on a date with him are also feature in the 3-minute long video.

“Morning” by Teyana Taylor and Kehlani

Teyana Taylor and Kehlani have turned up the steam on their sex-drenched slow jam, “Morning”, with the Spike Tey directed music video. The R&B queens teamed up for the song expected to feature on Teyana Taylor’s sophomore tape when it drops in December. The music video ushered viewers into dark neon-lit rooms with beds with silky red bedsheets that match the artists’ red lipsticks as they seduce viewers by caressing their bodies in their sexy lingerie. Their sultry lyrics are brought to life through the sexual direction and intimate make-out scenes that highlight the charming chemistry the two share.

The fourth season of the exciting TV drama, “MTV Shuja Naija”, premiered on Sunday, and already, the thrills and twists are coming in fast. The first episode continues to follow the story of the students battling teachers and parents as they demand justice for the alleged rape of Frances by Corper Yasmin. Faa is also seen battling for justice as she tries to bail her brother from prison while Tobi continues playing his playboy role, seen with a new girl before reuniting with an old lover. This season is already set up to be thoroughly entertaining and Top Oshin’s direction for the show is clearly one to watch after her impressive work on films like “Up North” and “New Money”. You can watch new episodes every Sunday at 7:30PM.

Issa Rae and Lakeith Stanfield have gained acclaim over the last few years since their involvement in coming of age comedy shows, Insecure and Atlanta respectively. The two have since racked up quite the resume from starring in blockbusters such as Little (Issa) and Get Out (Lakeith) to voicing characters in one of the most intentional shows of our time, Bojack Horseman.

Now, they’ll be starring in an upcoming romantic comedy, ‘The Photograph’ as a couple and we’re all the way here for it. The film follows the story of Mae, who finds a photograph tucked away in a safe-deposit box, which she soon finds herself delving into her mother’s early life as a famed photographer. This investigation leads to an unexpected romance with a rising journalist (Stanfield).