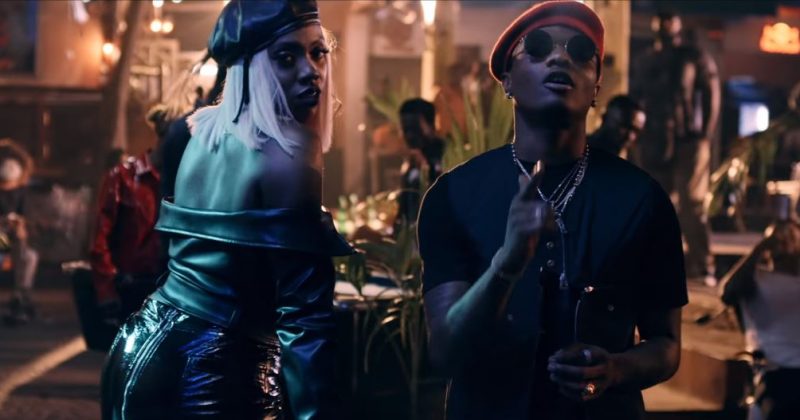 The best musical pairings from the past five years

Collaboration is arguably the most important asset to a musician. Whether it’s working with a producer, tagging along with an established act who’ll put you on the map, broadening your musical scope by teaming up with an artist from a divergent soundscape or simply having fun with your fellow buddies in the industry, collaboration is something all artists do, and something all musicians benefit from.

As such, collaborations exist in abundance. Today, on Apple Music Nigeria’s top 100 chart, over 50% of the songs Nigerians are listening to on the streaming service right now are collaborative works. In 2019 alone Afropop heavyweight, Davido collaborated on almost 50 tracks, whilst Cruel Santino the year prior didn’t release even one solo track, working with his peers to deliver timeless bops such as “Alté Cruise” and “Freaky”.

With collaborations being so popular within the music industry, our followers weren’t hard-pressed to find an answer our Tuesday afternoon conversation starter:

But on our side, as music experts dedicated to pointing our readership in the right direction always, our job is only made more difficult with so many strong pairings to pick from. Who are those two GOATs really? Is it Santi and Odunsi on the career-defining “Gangsta Fear”, the provocative “Am I A Yahoo Boy” duo, Naira Marley and Zlatan, Simi and Falz on “Soldier”, Wizkid joining Olamide on his breakout “Omo To Shan”, or even music vets Jazzman Olofin and Ayuba on the club banger that has remained timeless, “Raise Da Roof “?

Well, from year to year, as our tastes change, so do the GOATs; from the past five years, these are the pairs that have delivered the top 3 team-ups.

It’s hard to think of 2016 and not remember the summer of dancehall Drake who delivered the trifecta of “Controlla”, “One Dance” and “Work”, the last of which was a Rihanna assist. Whilst Wizkid was doing his thing in the overs, enjoying fresh acclaim from his “Ojuelegba” remix the year prior, firing the clubs up right alongside the international acts were vernacular rappers like Phyno and Olamide, and Sarkodie over in Ghana. At the same time, two boys who would change the face of Nigerian music forever were also laying their foundations.

First breaking out with his Wizkid assisted “Omo To Shan” – also a strong collab itself  – it didn’t take long for Olamide to secure his title as the king of street rap in Nigeria. A few years later when Phyno burst onto the indigenous rap scene, diversifying the space with sounds from the East, the two made a formidable pairing who to this day, continue to drop lasting collaborations.

Playing right into the loud, up-tempo, instrumental preferences of a typical Lagos party, Olamide and Phyno’s “Fada Fada” went off at every engagement and boomer birthday, doing a solid job of uniting both Igbo and Yoruba cultures in collective celebration.

Patoranking sure knows how to pair up. Tapping one of our talented neighbours, Sarkodie for this 2016 banger, Patoranking left an imprint in club scenes from Nigeria to the UK and right back to Ghana. There might not have been much kissing, but there was certainly a lot of touching, whining and gyrating to this one, way back when.

Not too much needs to be said of this game-changing collaboration. Bringing Odunsi to popular consciousness and defining Santi’s signature flow, “Gangsta Fear” opened up a sonic revolution in Nigeria, inviting in the diversity of sounds we enjoy today. Fairly new in the game at the time, the song went on to become a certified and undeniable hit in the years to come.

As 2016 is known for its Drake run, so 2017 is characterised by Davido’s back to back to back to back solo hits #thatyear. But just because Davido was keeping his tracks to himself doesn’t mean everyone else wasn’t out creating collaborative masterpieces. With his grossly underrated ‘Sounds From The Other Side’ Wizkid was fully capitalising on his growth within the global music industry, Runtown followed in Davido’s steps to tap the coolest kid in Africa, Tiwa Savage lit the fire for what would become another unfortunately androcentric scandal, Odunsi & Nonso Amadi were cultivating their underground following and Ycee was prepping to show the world just how much he’s got with the help of Maleek Berry.

Collaborations were rife #thatyear, but none could top these three:

Both long-standing Nigerian pop stars by this point, it’s rather shocking that “Number one African Bad Girl and Star Boy” hadn’t given us a hit single together before “Ma Lo”. But when they did, oh, they did. With a delicate Spellz production, “Ma Lo” features one of Wizkid’s most memorable performances in recent time, which perfectly complimented Tiwa Savage’s command of the track.

Produced to perfection by Adey, Ycee’s “Juice” showed a completely different side to the “Jagaban” rapper, as he swapped out the lively Olamide-ready beat for softer tones, suited to the likes of Maleek Berry. With an easily captionable hook that fittingly describes the song (“too much juice too much sauce”) this unsuspecting collaboration between Ycee and Maleek Berry made huge waves that year.

Though pop culture hindsight might encourage us to focus on the fact that Drake refused an appearance in the two music videos Wizkid put out for this jam, we dare not overlook just how powerful this here record really was. Recorded at the same time as the chart-topping “One Dance”, Wizkid took full control of this Drake collaboration, making up for the fact that his sensational verse was mixed into a bridge on the Billboard No. 3 record.

With a lengthy Drake verse that hits as hard as anything on the 2016 project, Views, and a lulling yet still captivating Wizkid performance, coming at the top of the year, “Come Closer” was a hard act to follow. And no duo managed to.

‘Welcome back, Duncan Mighty’ read the banner as we entered into the new year. Duncan Mighty’s return to music back in 2018 illustrated the industries adventurous year. Not your typical Girl Next Door, Teni Makanaki became the star of the show, whilst the Alté scene made it clear alternative music in Nigeria was here to stay. In 2018, music finally broke free of its afropop chokehold, leaving room for a broader range of talents coming to the fore. With the inception of Bojebutter and one of Davido’s best features on Fresh L’s “Firewood” in 2018, the landscape certainly seemed more welcoming, but ironically the sound that still managed to hit the mark in terms of dual collaborations had afropop at its heart.

Back in 2017, we were introduced to Davido’s unmatched proficiency on a Fresh VDM beat, and, recorded back then, “Firewood” was another hit in their combined catalogue. Pitted as one of Davido’s best feature performances ever, “Firewood” might not have done the same numbers as some of the year’s other couplings did, but its resounding success speaks to just how fire this duo is. More of this please.

The people will always be hungry for some Boj and Ajebutter – they have 2014’s “Omo Pastor” to thank for that. Lead single off the first installation of their joint venture, Make E No Cause Fight, “Yawa” reminded listeners of just what we were missing and left us thirsty for more from these two. They delivered on the EP and, rivalling Olamide and Phyno, don’t stop coming back with joint hits.

“Soco”, “Kana”, “Nowo“, “Fake Love”, “Energy (Stay Far Away)” after overstated criticisms of his 2017 EP, ‘Sounds From The Other Side’, Wizkid brought it back home, making an undeniable impression on the Nigerian music industry. To be honest, “Kana”, “Energy” and “Fake Love” could easily have filled this top three. But “Fake Love” will always take the cake as the number one pairing of 2018, thanks to Duncan Mighty, the unexpected comeback vet who led this record into its various high ranking chart positions.

Zlatan made an indelible mark on the music industry in 2019. Kicking off the year on Burna Boy’s award-winning “Killin’ Dem“, Zlatan went back to team up with previous collaborator, Naira Marley for the tongue-in-cheek “Am I A Yahoo Boy”. The first single brought the Zanku trend, pioneered by Zlatan on “Able God”, into 2019 the mainstream, setting the tone for what the rest of the year would look like. The second single certified that this was the sound that would dominate the year – it was in this sonic atmosphere that newcomer Mojo’s hard-hitting “Chop Life Crew” was primed to thrive.

Released during the Homecoming Easter fanfare, “Chop Life Crew” grew into prominence in the months to come, becoming the song of the summer. Coming in like a thief in the night, Mojo took us to the streets, forcing listeners into more sinister notes as he spread camaraderie, free-spiritedness and confidence over the outstanding Ronehi and Le Mav produced beat. We’re still thanking him for it.

With the Chocolate City crew and their adversaries preoccupied with debates over who exactly is the best rapper in Africa, or even just here in Nigeria, Naira Marley was setting the record straight, on the record. Even EFCC couldn’t get enough of this song, it would be an undeniable number 1. if not for that other giant Zlatan feature.

The year isn’t over but we’ve heard some incredible collaborations, and they’re all still fresh in our minds, making this ranking the toughest no doubt. From Burna Boy hopping on Buju’s “L’enu” to Tems finally gracing an Odunsi track with her magnanimous vocals, there’s already a strong list of Siamese GOATs to pick from. But off what we’ve heard of this year so far, these three records have more than earned their spots on the podium.

Produced by Higo and HVRRY, this dynamic record pairs Buju and WANI, who both take a distinctly different approach to the song, but come together to produce something truly bewitching. Crowned the Best New Music of the week it was released, “Company” is an infectious song that could move crowds at a concert, when the time comes, and also play softly through your bedroom speakers if you’re in the mood for a chilled atmosphere. That’s the kind of versatility you’d expect to find in a top 3.

His first official single since ‘Mandy & The Jungle’, “End of the Wicked”, named after the Nollywood horror movie, is an introduction to Santi’s latest universe and a clue into what he got up to in the year between the album and this single. The long pause – like the one that appears at the start of the song – was worth it. Bring on the tongue twisting in Santinese, please.

Ladipoe and Simi’s duet over the chorus is legitimately flawless and in itself is enough to put this jam at number one. But “Know You” does a whole lot more. The lyrics are relatable, the music video is adorable and the performances are A1, and earned several weeks at number 1 across many different charts. They’re likely to stay on top of that mountain.

0000
Previous Article Patoranking is repping his set in his latest single, “Abule”