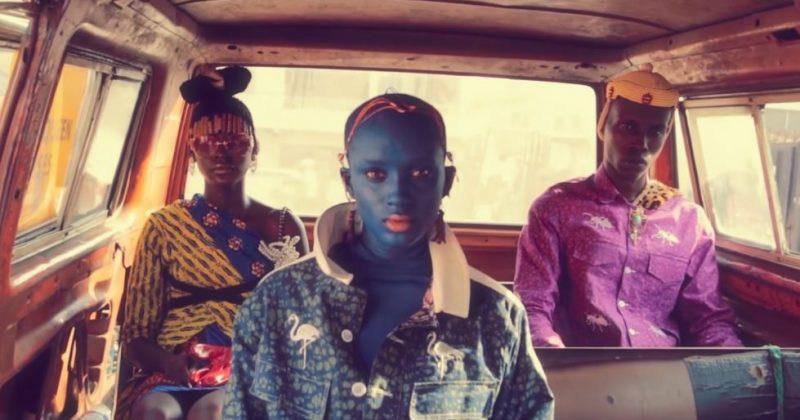 AV Club: Daniel Obasi’s “An Alien In Town” is a dull attempt at Afrofuturism

Afrofuturism has become a recurring conversation, in the on-going African renaissance featuring the showcase of a so-called, ‘new Africa’ through various art mediums. African art has always been African art, and to his credit, Daniel Obasi’s new fashion film, “An Alien In Town” offers an interesting perspective from an African reimagining Africa without any of that pretence. The filmmaker, stylist and photographer’s movie debut, “Embers of Bloom”, was similarly centred on Afrofuturism. But for his latest work, “An Alien In Town” he depicts yet another amorphous look at post-modernism in collaboration with fashion brand, Vlisco&Co.

The drum scoring reminiscent of war scenes in traditional African movies sets a tense tone for “An Alien In Town” as we follow the lives of three characters: A well-dressed African couple and an alien navigating their way through an unnamed African city. The film starts with the two humans riding a motorcycle through a barren landscape till they find an alien wandering through the scenery and invite the creature to experience the city with them.

Asides the alien, the only futuristic elements captured in “An Alien In Town” are the outfits designed exclusively for this partnership by Tokyo James and Abiola Olusola. But sadly, most of the attention it deserves is distracted by the fast-moving camera and poor video lighting. Though Obasi in a conversation with Vice described the alien as a representation of how Africans living beyond the borders of the continent view Lagos and Africa at large, that sentiment is hardly communicated or reflected throughout the five-minute film.

Like his previous release, “Illegal”, Obasi merely hints at his message on “An Alien In Town”, never properly touching on any concepts. “An Alien In Town” had all potential to be an important tool for telling a post-modern African story from within, particularly given the current popularity of a pop-culture art geared towards rewriting African stereotypes. The opportunity to showcase the truly otherworldly alternative fashion in Nigeria on a global platform is lost in the poor video editing and technical problems, that only gives the film a lurid amateur gloss.