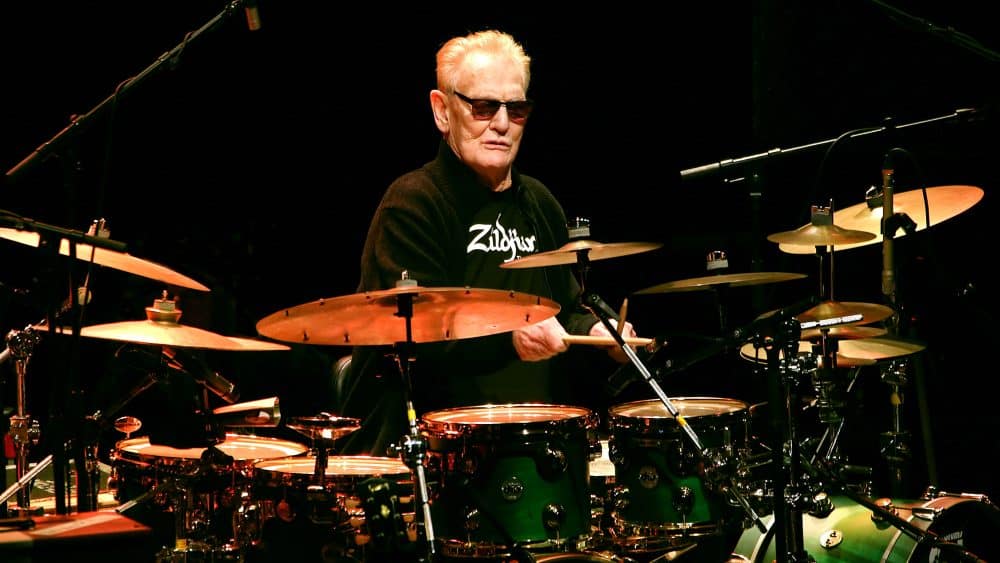 After a stint of critical illness, legendary drummer Ginger Baker passed away in the early hours of yesterday morning, at eighty years old.

Described as the hammer of the gods, Ginger Baker earned a reputation as Rock Music’s first superstar drummer, due to his work with influential supergroup, Cream. Co-founded with singer/guitarist Eric Clapton and singer/bassist Jack Bruce, Cream had a wildly successful but brief run, with four studio albums between 1966 and 1969. They sold over 15million records, and their third album, ‘Wheels of Fire’ was the first double album to sell over a million copies.

After Cream disbanded, Ginger Baker spent the 1970s in Lagos, Nigeria. It was during this time that he worked with Fela Kuti, during the early days of his Afrobeat exploration. In 1971, he sat in with Fela and his band, Africa ’70, which resulted in the studio album, ‘Live! (With Ginger Baker)’. The album comprises four foundational Afrobeat songs, including “Black Man’s Cry” and “Egbe Mi O”, as well as an extended drum solo with Africa ’70 drummer, Tony Allen.

In 1972, he released his debut solo album, ‘Ginger Baker at his Best’, and then set up Batakota (ARC) studios in 1973, as a prime recording spot for local and international musicians. Amongst the host of artists Batakota played host to was ex-the Beatles member, Paul McCartney, who recorded the hugely successful ‘Band on the Run’ album in Lagos, with his Rock band Paul McCartney and Wings.

Baker’s influential style of drumming combined jazz and African rhythms, with a drum set that included two bass drums instead of one. He was inducted into the Rock and Roll Hall of Fame in 1993 as a member of Cream, while he entered the Modern Drummer Hall of Fame and Classical Drummer Hall of fame, in 2008 and 2016 respectively.

Since the announcement of his death, tributes have been pouring out from admirers, close friends and high profile collaborators. Jay Bulger, director of the award-winning documentary, “Beware of Mr. Baker”, has also written a memorial piece for revered music publication, Rolling Stone.

Here are some of the tributes:

Sad news hearing that Ginger Baker has died, I remember playing with him very early on in Alexis Korner’s Blues Incorporated. He was a fiery but extremely talented and innovative drummer. pic.twitter.com/tZg3IGwP4Z

Ginger Baker, great drummer, wild and lovely guy. We worked together on the 'Band on the Run' album in his ARC Studio, Lagos, Nigeria. Sad to hear that he died but the memories never will. X Paul pic.twitter.com/Rne4tn6A2i

The Bruce family would like to extend their sincere condolences to Ginger Baker’s family, friends and fans. Surviving a love hate relationship, Ginger was like an older brother to Jack, their chemistry was truly spectacular. RIP Ginger, one of the greatest drummers of all time ❤️ pic.twitter.com/G9Pl4Qecdp

RIP the music giant that was Ginger Baker. The beat behind too many favourite songs from Cream, The Graham Bond Organisation and Alexis Corner's Blues Incorporated. (If you haven't seen the great doc 'Beware Of Mr Baker' do check it out) pic.twitter.com/2ZaJcbcmK2

Dennis is not an interesting person. Tweet Your Favourite Fela Songs at him @dennisadepeter