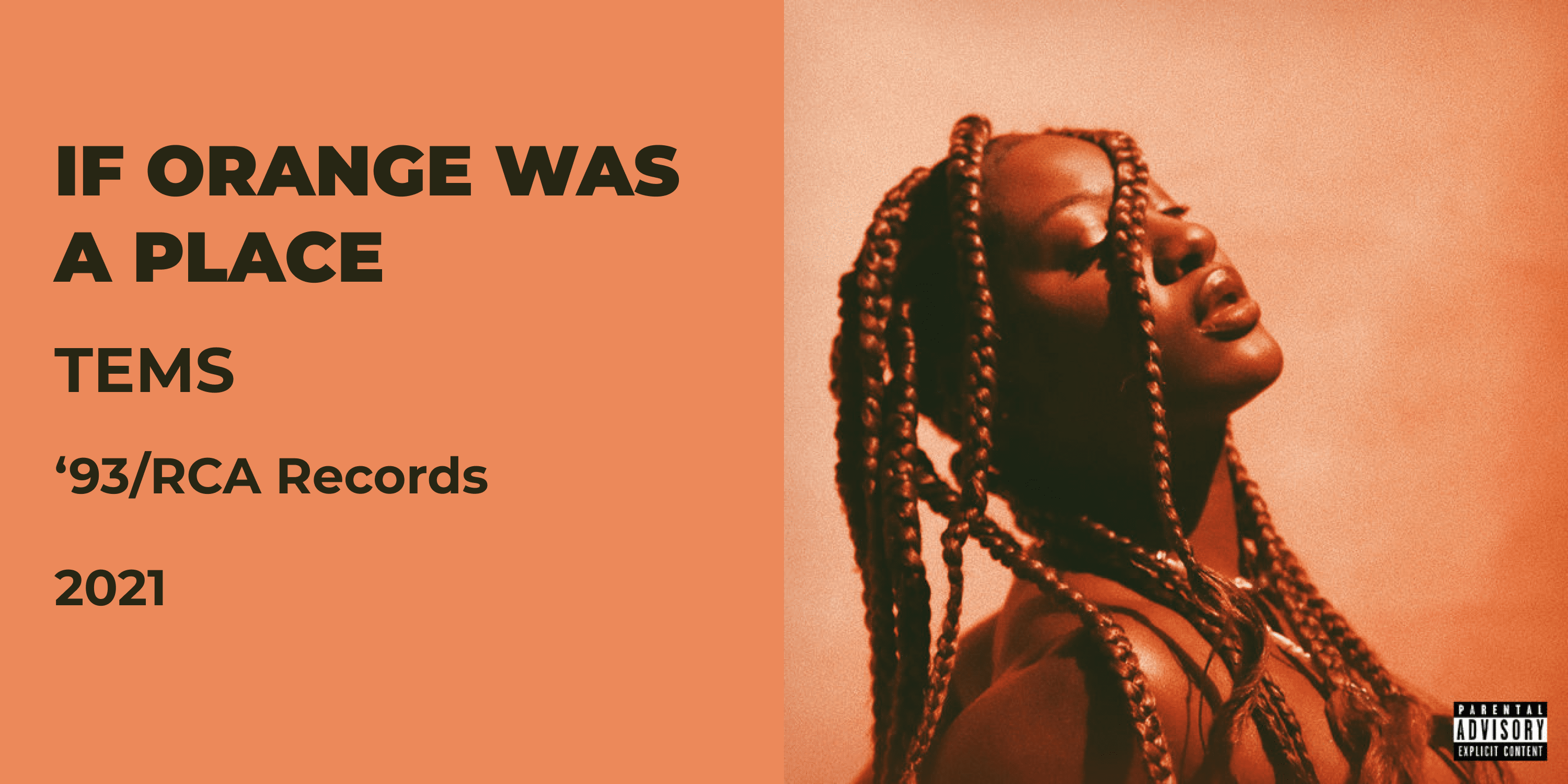 Review: Tems’ ‘If Orange Was A Place’

On her sophomore EP, ‘If Orange Was A Place’, Tems isn’t here to make any grand statements. The 5-track project is an effective re-immersion into her emotionally acute take on the melding of Afropop and R&B, bolstered by bulletproof production from GuiltyBeatz. 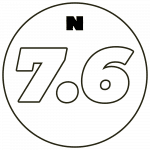 When billboards announcing the tracklist for Drake’s latest album, ‘Certified Lover Boy’, began appearing in cities across the world, it didn’t seem out of place to expect one of them to pop up right on our doorstep in Lagos, a cultural hotspot that the rapper had previously visited and drawn inspiration from. The coastal city’s cultural cachet has been exponentially high in recent years, producing crossover stars such as Wizkid, Davido, Burna Boy, and Tiwa Savage, as well as serving as ground zero for the amorphous, free-wheeling endeavours of West Africa’s alté community who have attracted global attention for their unconventional approach to music, fashion, and filmmaking.

Eventually, a CLB billboard did appear in Lagos, delivering the simple, but momentous message that a certain hometown hero was, indeed, going to be strutting their stuff on the much-anticipated album. “Hey Nigeria Tems Is On CLB,” two strategically positioned billboards announced in the West African country a day to the album’s release. In usual Nigerian fashion, the font for Tems’ name was noticeably thickened in comparison to the other announcement billboards. Bantering in the comment section of her Instagram acknowledgment post, Drake chalked the mix-up to hometown pride and it’s safe to say he wasn’t too far off.

There are many things to be proud of in the life of Temilade Openiyi at the moment, the least of which being that we’ve had front row seats to the unfolding of her magnetic star power. In the three years since quitting her digital marketing job to make music professionally, she has moved from being a key figure in the alté community to being one of the most exciting voices currently operating within the Afropop space. The breakout success of “Try Me” in 2019 cast her as a specific avatar for the brooding search for freedom that many in her generation can relate to.

By the time Tems’ debut project, the forlornly-titled ‘For Broken Ears‘ arrived in the final quarter of last year, she was already widely viewed as a star in the making, a deceptively dynamic vocalist blessed with a pen as sharp as her mind. Her showing on Wizkid’s “Essence,” the standout track off the Afropop icon’s ‘Made In Lagos’ has planted her at the heart of the genre; in that song, she is the heart, the fire-starter, and its reverbing soul. Her role on Drake’s “Fountains” is a subversion of the “Essence” template, seeing her introduce an introspective plain to the song while remaining anchored to the song’s airy Amapiano-influenced feel.

Taking advantage of the buzz – and attention – that a Drake cosign inevitably brings, Tems has shared her second EP ‘If Orange Was A Place’, a five-track project that arrived less than two weeks after CLB’s release. It is admittedly a strategic marketing tactic but rather than riding the coattail of stars like Wizkid and Drake to lean into their world of radio-monopolising and undisputed bangers, Tems has fashioned her own way.

The rising star has used the opportunity to introduce her audience to her hazy sonic universe, doubling down on the melancholy and angst that inspired – and powered – her earlier releases such as “Mr. Rebel” and “Looku Looku”. Concurrently, it’s obvious that she is at the most self-aware she has been at any point in her career, engaging with ideas and dissensions sourced from wider cultural pipelines that she has often overlooked. “Oh, my voice is a mystery/ But they always tryna diss me,” she points out in the opening moments of “Replay.” Of all the songs on this project, it is the song that most clearly portends what the future of Tems’ trajectory might be: one which places forthright lyricism over instrumentals with light polyrhythmic tinctures.

Without coming off as unduly calculated, Tems has always managed to control the narrative of her expertly curated releases. Last year’s ‘For Broken Ears’ was almost exclusively driven by Tems’ soulful reflections on the heartbreak and stress that shaped her, and this year’s offering is no different in its subject matter. Here, Tems is similarly inundated with her cathartic responses to emotional turmoil. Project opener, “Crazy Tings,” is a case in point as Tems points out the dishonesty and toxicity of a love interest (“So you need someone to deceive/ And you’re trying to think that I’m the one for you.”) Where this same set of variables provided the unmistakable perspective of 2020’s “Damages,” it falters on “Crazy Tings,” leaving Tems whining and sounding monotonic.

It is a rare misstep that Tems course corrects on “Found,” getting into the swing of things with a delicate meditation on the complexities of life and the endless expectations that come with existing. “I feel I might just be coming undone,” she laments over a minimalist percussive backdrop in the opening stretch. Songs like this catch a glimpse of Tems’ place in the zeitgeist: when she confides her fears in these songs, she gives form to the innermost insecurities and anxieties of many who tune in to her music. Her comforting drawl always sounds like a friend reminding you that sorrow never lasts for a lifetime. Tems expertly exmploys the skills of jaded hearbreak crooner, Brent Faiyaz on the number who offers an optimistic counterpoint to Tems’ despair. It is telling that when Tems finally re-emerges, she is more buoyant, closing out the collaboration with more hopeful affirmations (“Basically, I might not be weak/ Basically, I might not be falling.”)

There are no obvious radio singles on ‘If Orange Was A Colour’ but “Replay” is perhaps the most dynamic exploration of Tems’ genre-meshing strengths, seeing her adopt a sprawling flow that harkens shades of “Ice T.” Here, she is at her most jovial and insouciant, vocalising the secret–and mischievous–fantasies of any 26-year-old (“I make them weep till they run insane/ So get me lit on a weekday.”) As with all things Tems, the gloom is never far away, even the rare sliver of cutting loose serves a larger function of expunging past distress and the latter half of “Replay” is riddled with references to her life before the fame and the jabs she had to deal with (“Back then when I ain’t have no friends/ And yah condescend”).

Then there’s the mentions of the much-publicised arrest incident in Uganda last year (“Pissed ‘em off, they locked me up in a celli/ Then they shock dem when they see me on the telli.”) Tems shows that through all of the turmoil of her past life and the retelling of old war stories, Ms. Openiyi breathlessly maintains that her spirit cannot be shaken because her power is not of this world. To anyone else, it might sound like she’s bragging but for many of us who have witnessed her tireless dedication to her craft and her fierce spirit, it’s not out of place that each project release feels like Tems stepping out of a cocoon-phased evolution of her career.

Production-wise, Tems mostly leans on Italian-born Ghanaian producer GuiltyBeatz. The beatsmith produced four of the project’s five songs, a casual departure from Tems’ usual self-produced nature, to provide sonic interpretations for her ruminative introspection. However, even at that, he does not stray too far from the patented cocktail of ethereal R&B, neo-soul, and immersive alt-pop that Tems has often gravitated towards.

The last songs few songs on the new EP are anchored in more bulletproof production from GuiltyBeatz and Tems’ dedication to outrunning her emotional turbulence. “Avoid Things” is about trying, and very often failing, to turn a blind eye to the problems of a relationship: “I try to avoid things/ Avoid things/ ‘Cause there’s no one, dis is madness/ Avoid things/ I try to resolve things/ Involve you/ But you don’t want to be sorry.” On “Vibe Out,” Tems just wants to enjoy a good day, sinking into familiar comforts far away from the triggering reminders that are capable of reopening old emotional wounds. Here, she’s seemingly more interested in love, passion, and desire than ever before, seeking out meaningful relationships in a sea of people seeking to eclipse her power.

In the close to one year since putting out ‘For Broken Ears’, Tems has vaunted to a more prominent place in Afropop, visibly expanding her sonic palette on the sweltering vibe of “Essence” and creating fans of mega-superstars such as Adele and Drake. However, her greatest strength has always been her ability to steep her listeners in the thick of the emotions that they’d rather run from. ‘If Orange Was A Colour’ functions effectively as a re-immersion into Tems’ emotionally-acute take on the melding of Afrobeats and R&B. “Struggle breeds character, you can’t learn if you’re comfortable,” Tems said in the video for her Apple Music Up Next feature last week. On ‘If Orange Was A Place‘, she certainly reminds us that the struggle, emotional ones mostly, might never end, but we can always seek a reprieve through music.

Stream ‘If Orange Was A Place’ below.