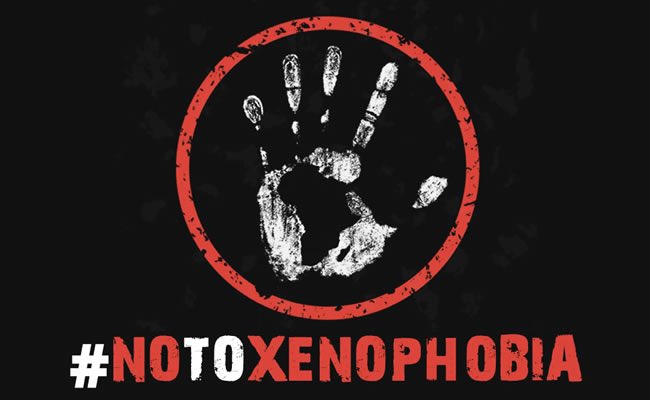 This is not the first time that actions in South Africa have caused the #SayNoToXenophobia hashtag to dominate social media. In 2015, Bloomberg reported that there was a death toll of seven people following the violent attacks on African migrants living in South Africa. Now the hashtag has surfaced yet again following the release of a series of harrowing videos capturing foreigners, mainly Nigerian business owners, their properties and cars being set aflame.

AlJaezera reports that the attacks broke out on Sunday following a clash between local taxi drivers and alleged immigrant drug dealers. This continued into Monday where anti-immigration protesters clashed with police and set fire to properties mostly owned by foreigners. Today, Nigerians are being vocal about their outrage at these inhumane attacks; with people actively protesting outside South African owned businesses like the Shoprites at Ikeja City Mall and Jakande while some celebrities have taken to social media to share their thoughts. Wizkid, Jidenna among others expressed their concerns; in the slew of online reactions, YCee had a heated exchange with South African artist, AKA that opened a broader conversation on the tense history between Nigerians and South Africans.

The history behind the bad energy between South Africa and Nigeria is inspired by S.African nationalist propaganda that Nigerian immigrants are responsible for crimes and have taken all the employment opportunities away from the locals. Considering that the 2016 statistic survey done by Pretoria provides a much less number for the Nigerian citizens in South Africa than the local media, one wonders if there are some political roots.

It may be too easy to presume the extent of the reported cases of xenophobic attacks as a S.Africa-wide occurrence. Alongside some of the most graphic images of violence and looting that surfaced online, the video of South African rapper, Cool Zet who delivers a verse about losing a friend to xenophobia, has also made rounds. Aside spotlighting the young rapper’s talent, this shows that just like any other fraction between two camps, the hatred isn’t all encompassing.

Rising multidimensional poverty levels in South Africa also indicate some of the violence is a result of low economic conditions. These attacks, perpetuated by second generation independent South Africans, can be traced to socio-economic causes; repressed poorer South Africans are unable to direct their violent outbursts at the minority white social class who are so far removed from them. This leads to them holding animosity for fellow Africans; particularly Nigerians who have a lot of commercial influence in their country.

Next month, President Muhammadu Buhari will visit South Africa and meet with her President, Cyril Ramaphosa with an eye to guaranteeing safety for all Nigerians in South Africa. In the meantime, it is important we begin to prioritise education on the history of how post-colonial Africa emerged. Not only does Nigeria have deep footprints in South African history, South Africa also deployed soldiers to Nigeria at the peak of the fight against Boko Haram insurgency in Sambisa Forest in 2015. These and more are recent examples of shared common purpose between South Africa and Nigeria that embodies the kind of African unity required for continental progress.

Regardless, the xenophobic attacks have also affected other African and Asian citizens with the crisis taking the lives of 62 people in 2008 and displacing of many more in subsequent attacks. South African authorities are currently tasking themselves with treating the reported case of xenophobic attacks as criminal cases. Until a judicial process is followed through and through, #SayNotoXenophobia.

Watching this made me cry💔💔
#SayNoToXenophobiapic.twitter.com/0EfIbuwpye

Next Article Peruzzi bursts out his reggae influences for new single, “Nana”