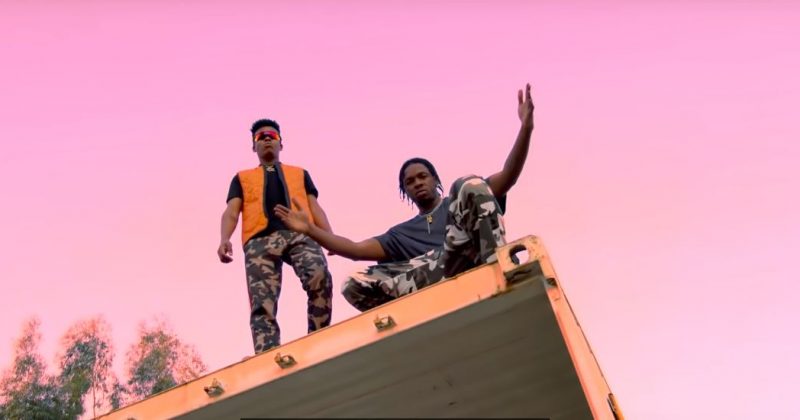 After the success of their collaboration on “Said”, it was only a matter of time before fans began asking for more features from the two artists and they teased snippets of “No Permission”. They have finally released the official single as Runtown’s debut under his Soundgod producer tag moniker. But unlike the more bubblegum pop intentions of “Said” single, “No Permission” shows off the dynamic sound of Afropop while also highlighting how Runtown is on the brink of successfully manoeuvring around whatever contractual obligations his former label still has on him.

The problems between Runtown and his former label, Eric Many reached its peak when the label demanded the arrest of the singer for colluding with his manager to scheme off performance fees among other revenues sources without the label’s knowledge. Though Runtown seems ready to leave the issue in the past with  ‘Sound God Music Group’, the reoccurring nature of the dispute has him taking preemptive measures to ensure his releases are free from the label’s claims. The convenient switch to releasing his new song under his popular Soundgod pseudo-name will let him keep his reputation as Runtown without contending its ownership with Eric Manny.

As if pulling off the career heist wasn’t enough, Runtown also manages to embody Afropop’s dynamic interpolation of American pop by casually adopting hip-hop’s braggadocios with his Nigerian quirks and accent. After becoming a household name off of his sweetly romantic “Mad Over You”, released a year ago, cockily rapping “Going Kamikaze on These Muderfuckers/ You Don’t Have to Like Me/ Nigga, I Excite me/ Go the Extra Mile for my Fucking Money” lyrics on “No Permission” shows hip-hop’s dominance on international music chart has influenced Afropop.

Though Non-African artists get accused of culture appropriation whenever they explore dancehall and Afropop, Afropop has always been inspired by the global pop sound since we ditched live recorded music and discovered electronic music production. Artists have always adopted the prevailing template of commercial-yet-indigenous sound with the synth-based production fueling Afropop through the R&B inspired P Square era, D’Banj’s venture into EDM, and Wizkid’s Caribbean inclined melodies. It guaranteed a wider appeal for artists, telling their Nigerian stories through the internationally acclaimed sound.

But rather than attempt to follow in the path of Wizkid and Burna Boy’s EDM, Caribbean and Reggae influences, Runtown is turning his attention to hip-hop with the genre’s recent dominance in music conversations around the world. And though it’s not the first time a Nigerian artist is delving into hip-hop, Runtown’s stubborn retention of his Nigerian cadence while rapping over the trap beat is what makes the vague religiosity of the chorus, “Sold a Million So They Said I Sold my Soul”, an ideal blend of Nigerian quirks and the biggest genre in the world.

Hip-hop has evolved through DJ sets to auto-tune, trap music which initially felt like gimmicks forever on the brink of falling from public rotation. But rather than fade into obscurity, these sounds have become more entrenched in the mainstream soundscape. Runtown’s dexterity with neo-highlife and hip-hop might birth a whole new era of Afropop. He has certainly proven his international pedigree since he was announced to be working with Rihanna on her coming project, ‘#R9’. The cosign from an international celebrity like Rihanna, tracing over his hip-hop fueled Afropop verse might give the sound global penetration and even staying power.

Some might take “No Permission” as yet another example of the potent Midas-touch of Runtown and Nasty C’s collaboration because it is, but it also serves as a marker of the prevailing sound of hip-hop and it’s commercial potential in the hands of Nigerians pop artists like Runtown. With the genre modulations we’ve experienced over the years, we’d hear songs that don’t sound like anything we know, but are inspired by everything we’ve known.

ICYMI: Here’s what to expect from Runtown’s coming project

0000
Previous Article La Meme Gang are collaborating with Sarkodie for the second time on, “Know Me”