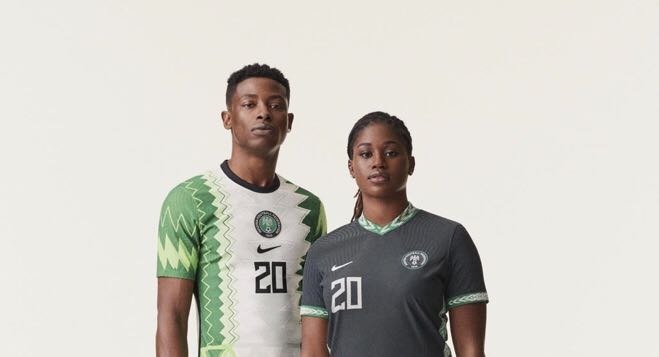 The success of Nigeria’s 1995-themed Nike jersey at the 2018 World Cup has allowed Nike to continue incorporating national history and cultures into their jersey designs. To commemorate the New York Fashion Week back in February, the sportswear giant unveiled a new set of jerseys for Nigeria, USA and Korea. The jerseys celebrate the federations’ distinctive attributes with highly differentiated collections that also highlight Nike’s 65 chassis options across varying necklines, sleeves, cuffs, badge placement, etc.

For its new design, Nike gave Nigeria’s nostalgia-influenced 2018 jersey a more culturally immersive makeover, with hand-drawn prints and a colour scheme that resonates with the national flag. The new Nigerian national team jersey didn’t only take on a new look, as science is the core of Nike’s design process. The design team leveraged 4D visualization tools to bring the product to life, after capturing data on more than 300 footballers and football-specific movements. The result of the precision knitting is a kit that is 55% faster wicking, 13% more breathable and with 10% more stretch than Nike’s previous kits.

In putting it together, the Nike crew collaborated with a creative team of fashion and culture tastemakers from Nigeria. NATIVE spoke to Teezee, one of the creative minds behind the design research and he told us his contribution to the creative process. “I worked with Grace Ladoja, Rukky Ladoja and Bubu Isigo on this project, from the inception of the ideas to the end. We essentially did all the research on the textiles traditionally used in Nigeria, trying to get them incorporated into the new kit.” He also explained that the jersey isn’t about getting a better version of the successful 2018 kits. “It’s about introducing new innovation with local-inspired techniques for these new ones.”

This is the 3rd time Nike is unveiling new national team jerseys for Nigeria since they became official kit sponsors of the National Football Federation (NFF) in April 2015. Ahead of international friendlies in October, the NFF has now officially unveiled the new kit as the country’s national jersey for both the Super Eagles (male team) and Super Falcons (female team), from 2020 till 2022. In addition to the NFF announcement, several Nigerian footballers have come on social media to flaunt the new jersey and other additional threads.

Take a look at some of them below.