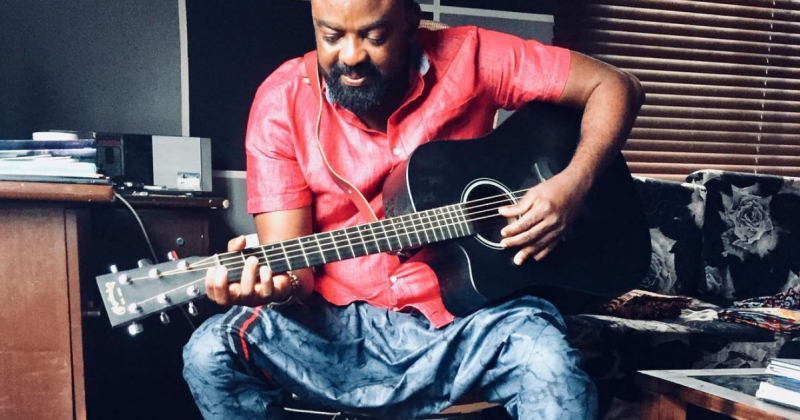 The 5-time award-winning actor-turned-director, Kunle Afolayan is about to embark on a new career venture. Afolayan who has been immensely acknowledged for his movie, “The Figurine” recently launched his clothing line, Ire Clothings and released “Kunle’s Kembe” as the introductory collection.

“Kunle’s Kembe” is inspired by traditional baggy trousers of the same name, which have featured in many movies showcasing the Yoruba culture; Afolayan wore it to play his role in “October 1”. Since he commercialised them, a few celebrities have been spotted in the trousers. Even the governor of Lagos, Adewunmi Ambode has been photographed with a pair of “Kunle’s Kembe”.

Ambode embraces Kunle’s Kembe #kunleskembe Apart from the kind of relaxation which the Kembe pants could give a busy State Executive like Governor Akinwumi Ambode of Lagos State, he beams the kind of pride one displays when a protégé is delivering on the promises of lifting a cherished culture and tradition. Heartily, Ambode embraces the fast-trending pop Kembe fashion, a baggy-styled debut brand of wears under Kunle Afolayan’s label called Ire Clothings. I am a member of the Board of Lagos State Council for Arts and Culture, and apart from running Ire Clothings as a business,Kunle’s Kember, the ‘funkified’ Yoruba attire, made entirely from local fabrics, is just one of his ways of promoting Lagos State, and the South-West by extension to the rest of the world. We unveiled the official logo of Ire Clothings, a creative lettering bearing the scissors as a center of attraction on a blue fabric, dotted by sparkling cowries. The only shop will be ready for orders from 1st of September. Do check us out at www.ireclothings.com and kindly help spread the new. #re @akinwunmiambode @ireclothings @steveayorinde @lagostourism @ltvsocial @zukiliciouz #fashion #trend #trending #africa #lagos Please place your order via www.ireclothings.com follow us on Instagram @kunleskembe @deesrdiasies . WhatsApp +2349093022647. Ire

Kunle Afolayan describes the brand as ‘Trado-modern’.  In a recent interview about the brand, the filmmaker said that the goal is to merge traditional fashion with modern fashion, “it is one of the things about our heritage that has captured the pop culture. The motive is trado-modern, and I am glad to be promoting it. This attire is one of the products that I intend to also use to promote Lagos”.

End of Discussion! This I call “rocking #kunleskembe with class”. Thanks egbon @mofedamijo For the patronage. What are you waiting for? Order our new collections via www.ireclothings.com DM @ireclothings @deesrdaisies WhatsApp +2349093022647 . #fashionblogger #trending #kembe

Afolayan’s interview also revealed that the Kembes were released to test market demand, stating that Ire Clothings is working on other outfits that will be released for sales in due time. Owing to the feedback from the Kembe’s sales, the movie director is now pushing further into the world of Fashion; Ire Clothings has been announced as one of the 95 that will be featured at the Africa Fashion Week Nigeria, set is to hold between the 15th and the 16th of September at the Lagoon Restaurant in Victoria Island, Lagos.