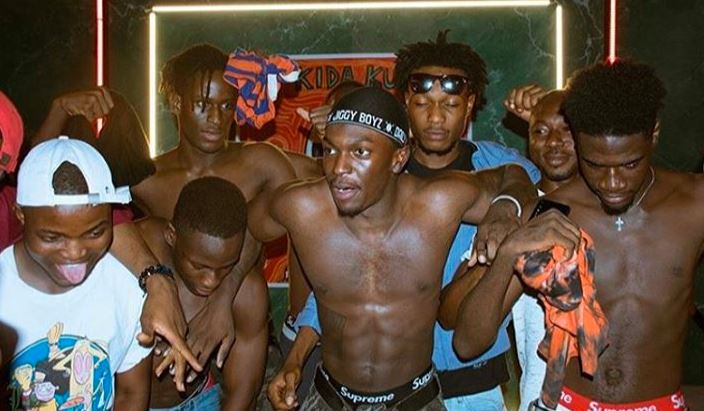 Where were you: Kida Kudz’s ‘Nasty’ listening party

Though listening parties only draw a fraction of the crowd of big festivals, they are what keeps the music scene thriving through the year. The fanfare for Kida Kudz’s debut project, ‘Nasty’ already established it one of the notable music releases of the year. It generated the media hype that’s worthy for an artist who has successfully crossed over between Nigeria and the UK and Nigerian fans were more than happy to be the first to host him just a day after the EP debuted on the 7th of February.

It’s an hour after the time written on the invite Kida Kudz sent into fans’ dms and emails, and a stream of ravers are gathering at the car park of the popular Danfo restaurant in Ikoyi. Unaware of Lagos’ poor timing, fans who had come from Jos to show their support for Kida Kudz socialize with other early birds and take pictures with celebrity guests like Zamir. No one notices when Kida Kudz sneaks upstairs to the Revered Nature location of the listening party.

Upstairs, the lights are on, the ‘Nasty’ mixtape is playing and the partygoers and fans are huddled up in groups, talking and waiting while Kida Kudz’s mic is set up. There’s a sense of anticipation as the venue fills with dyed haired party goers, photographs, graphic designers, artists and students. Everyone has come together looking for the same thing: to meet Kida Kudz and celebrate his debut project with him.

As soon as the mic is ready, he speaks to the room and thanks everyone for coming. “We got one!”, he says with a smile that assures everyone they are at the listening party for an album they’d be talking about for years to come. His confidence seems to spread through the room and the crowd erupts in cheers as the opening track, “Majesty”, booms out of the speakers and more people come closer to catch a clearer glimpse of Kida Kudz in his elements. With more people taking out their phones to share their experience with others and document the moment, he takes off his shirt and shows off his well-toned body to applause from all the adoring fans in the building.

Before getting into his performance, he invites anyone who has anything to say to come forward and speak freely. Three different people take turns expressing how pleased they are with the project and how much impact his music has had on their lives. He reciprocates the love by walking around freely between the crowd to a different spot where a stage is set for him and from there, he performs “Big Up”, “Tasty Time”, “1 am” and others choice picks from the 10 track tape.

Kida doesn’t rush home after the show is done. He chills at the car park with Odunsi, Ashely Okoli, Zamir and others who walk up to him to congratulate him for the project and take pictures with him. Lagos couldn’t be any more welcoming.