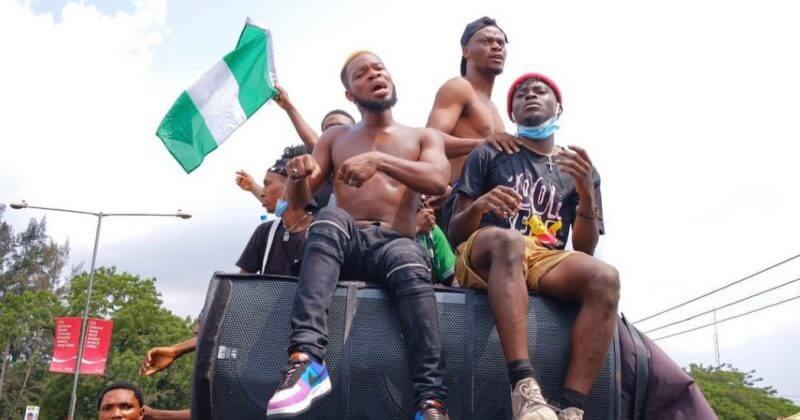 The whole month of October has felt like one long bad trip and it’s still not over yet. For many young Nigerians, this was the first time in a long time that it felt like our voice mattered in our own country. A while ago, we looked into how the fight to #EndSARS was more than just about disbanding a rogue police unit but rather about coming to terms with the decades of rot at the heart of the Nigerian system. A system that exonerates killers and assaulters, one that diminishes the value of its young people and exalts and upholds a gerontocratic state.

But in these trying times, there have been moments where we have been able to come together and feel a sense of collective healing. Earlier this week, while young Nigerians were still demanding answers to questions from the night of last week’s massacre, footage emerged on our timelines showing an ex-Lagos State Governor mysteriously discovering a camcorder at the scene of last week’s brutal attacks. The camcorder was posited to continue key footage that would help further the ongoing investigations about what took place at the toll gate but young Nigerians were not easily fooled. Noise erupted on the timeline as everyone shared their disdain for how gullible our leaders assumed we were, a parallel which can be drawn with how they consistently infantilise young Nigerians.

After the initial shock died down, Nigerians did what they do best. We made jokes out of a bad situation and began memeing our way through the pain as a way of coping with the distressing revelation. On the timeline, things seem to be getting lighter and conversations and debates we once had have started making their way back to our minds and hearts. While we’re still monitoring the judicial panels and increasing the pressure on elected government officials through social media, we’re also trying to find some healing amidst the long journey ahead to good governance and total police reform in Nigeria.

For me, I’ve been listening to Tems’ EP ‘For Broken Ears’ and drawing parallels with the current reality that we have to navigate. It’s helped me find new strength to take on each day, even when results haven’t been forthcoming. To this end, I spoke to some members of our community on what they are doing to lighten the load in these deeply unsettling times. From immersing themselves in rap music to engaging in new passion projects, here is what members of our community had to say.

I’m watching Gotham. I started watching it with my sister when she was near the end, but I returned to season one a couple of weeks ago. Seeing the crime and corruption of the city has been quite triggering, especially as the story is told from the position of good police officers – at a point, I genuinely found myself jealous of Gotham City. Still, I keep watching because I am very attached to the characters.

I’ve actually started therapy for the first time. I was just feeling so down at the height of the protests just a week ago and then Tuesday happened, that really shook me. I had to get some help and reached out to a therapist so I’m glad to be working through all my survivor’s guilt. I can’t say I’m better now but I’ve learnt it’s a process.

I started watching a cartoon called Bravest Warriors. It’s super chilled and has helped me get my mind off the weight of our present reality. The new albums from TY Dolla $ign, Tems and Preme and Popcaan have also been great for escape. I’ve also been playing online games with friends. Being out in Lagos doesn’t feel safe these days but at least we still have things like the iPhone games to keep in touch in a fun way.

I’ve actually not done that much to help myself and I realise that’s bad to say. But I guess I’m now aware that I haven’t so I am trying to take some active steps to change that. I actually met someone at the protests and that’s been a good way to lose myself in another world when things get rough.

I don’t know exactly how I’ve been feeling. The only thing I know is that I want to spend time with my friends, great art and good merch. I think this is the time to work on ideas we have mentioned before and look for ways to implement. Also just drugs. I’ve been trying to express some feelings that I haven’t confronted. The massacre has taken a big toll because the toll gate was the safest spot during the whole protests. So to see how it has become, no one is safe at all.

I’d say first off, taking a break from regulated work (my day job) has been super helpful. Also listening to Solange’s ‘A Seat at the Table’ each morning and Ari Lennox’s ‘Chocolate Pomegranate’ every afternoon. Immersing myelf in old television series like Moesha and spending loads of time doing nothing or engaging with banter on Twitter has also been helpful.

I think the #EndSARS protests have really given me a sense of awakening. It’s so crazy how our leaders don’t know what they’re doing and are leading this country into vibes. So honestly I have just tried to recenter myself and remember that life is so short and we need to seize each moment. So I’ve started taking my rapping seriously. I always said I’d record one day so why not now?

I’ve been listening to a lot of rap cause no matter what the cause of my uncertainty is, the way rappers juxtapose their past and present lives on wax gives me grounding. Trying to decipher what their clever wordplay means occupies my mind and distracts me from reality, but at the same time, I’m applying what they’re saying to my own reality. In this instance for example when Roddy Ricch says ‘rich but I’m still ducking one time’ on “Perfect Time”, it makes me think about how no amount of money or privilege protects you from Nigeria doing its thing, and essentially, you can be rich and still ducking the police because they’re out of anybody’s control.

I’ve honestly just been drowning myself in work. Also listening to a lot of music that I like and focusing on passion projects that I haven’t started yet. I’ve been watching horror movies, eating junk food, and usually doing things I would do when I need to deal with distressing shit. I’m also doing work that makes me happy so I am trying to focus on that. Obviously, I couldn’t stay away from social media but at least this helped relax my mind a bit.

I have found myself wanting to educate myself more and know about Nigerian history cause I wasn’t really taught. So that Netflix special Journey To An African Colony and a couple of videos about Biafra my cousin sent me on Instagram.

ICYMI: How the Festival of Lights captured the heart of the End SARS protests

0000
Previous Article A look back at Wizkid’s album cover arts from his debut, ‘Superstar’ to ‘Made In Lagos’