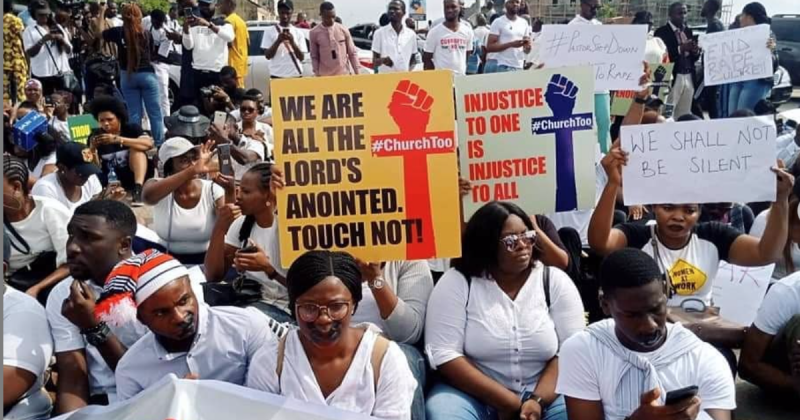 Earlier today, Biodun Fatoyinbo of COZA church announced that he will be taking a leave of absence from the pulpit of the church, citing the uproar of ongoing rape allegations as his reason for temporarily vacating his position. Although stepping down is not the same as answering for the allegations, it is indicative of the possibility for justice to prevail as noise around the situation continues.

As the YNaija interview featuring Busola Dakolo, celebrity photographer and wife of popular singer, Timi Dakolo, began to garner attention last week, the takes on social media were piling up in their variety—the good, the bad and the disgusting. In a staunchly conservative society where religious ideals form the core identity of a large percentage of Nigerians, Busola’s interview was destined to create a loud bang and bring in mixed reactions due to her allegations being levelled at a pastor—a well-known one at that. Where some saw bravery, others saw audacity; where some are approaching with empathy, others are approaching with haughtiness.

From the more sensible, sympathetic takes, to the truly vile comments aimed at shaming and blaming, it all formed an expected but nonetheless disappointing mirror of a shambolic society, in which there’s still no consensus anger at rape and the (alleged) perpetrators in 2019(!), and where victims have little to no agency over their stories and the ensuing trauma.

In the now-viral interview, Busola alleged that she had been raped—twice—as a teenager by Biodun Fatoyinbo, Senior Pastor and founding member of the Commonwealth of Zion Assembly, the church popularly known in Nigeria as COZA. Confessional, jarring, sobering and most of all heart-breaking, Busola meticulously detailed the events of her experiences, clearly reliving the trauma of those events, and also explaining the long-term emotional damages she has suffered ever since.

In one of the defining moments of the situation so far, protests were held right outside the gates of the Lagos and Abuja station churches of COZA, on Sunday, June 30th, in solidarity with Busola Dakolo, Ese Walters—another alleged victim who had levelled accusations against Mr. Fatoyinbo in 2013—and a slew of other unnamed alleged victims, to loudly demand for justice. Mainly convened and galvanized through social media, both venues boasted robust turnouts, in just over 24hours of announcement and with heavy police presence no less, becoming the latest in a line of recent, successful protests aimed at demonizing the toxic culture of (not) addressing sex-related offences.

An "alleged" rapist should have his time in COURT.#IStandWithBusolaDakolo pic.twitter.com/SR65uLxxZN

Fewer things are as aggravating as the obnoxiousness with which rape, harassment and sexual assault is tackled in the Nigerian society. It is a negative phenomenon that has wholesome effects, from legal and constitutional provisions, to bare societal conversations. Perhaps, where it is most impactful is the culture of victim shaming that has become synonymous with these atrocious crimes, making it difficult for victims to search for justice, and in many cases find closure.

“Awareness is the biggest thing. Like a lot of people before today just assumed that it is not a big deal. That nothing will happen as Nigerians being Nigerians”, protester and social activist, Rasheedat Olarinoye told the NATIVE at the Lagos protest, explaining how the protests are a step in the right direction, in order to ensure that grave crimes like rapes will not be swept under the rug going forward. Considering how slowly the wheels of the Nigerian law turn, this protest, in addition to amplifying, serves as a means for concerned persons to carry out their social responsibility in demanding accountability from the alleged perpetrator, and swift justice from the law, with intervention from the state.

It is quite baffling in a country like Nigeria where wrongfully suspected individuals are put through hell, quite literally, and yet, a person accused of rape is afforded the caveat of “innocence until proven guilty”, and even worse, also afforded the luxury of settling out of court, sometimes with help from the family of the victim, citing an avoidance of public shame as the major motive. But what is even more daunting, is the difficulty in navigating the Nigerian justice system, especially when it comes to sex-related cases.

Per the Criminal Code—one of the two principal codes regulating crimes in Nigeria, with prominence in the southern part of the country—rape is an offence that carries life imprisonment as its punitive consequence, while attempted rape and indecent assault carry prescriptions of up to fourteen and two years respectively. As blunt as those punishments are on paper, the problem lies in being able to prove that these crimes actually occurred.

“As regards rape, there has to be proof of penetration”, a Benin-based lawyer explains to the NATIVE, adding that “there must also be corroborative evidence and medical evidence” for a conviction to occur. With these criteria set in stone, victims bear the onus to prove their allegations unequivocally. While there’s a necessity for thoroughness in prescribing justice, the difficulty of satisfying these requirements in a developing, if not retrograde Nigerian system, is grossly counterintuitive. “In Nigeria, rape victims are given the short end of the stick. They are usually treated as though it is their fault, like they consented to it”, Omolola Kayode, Lagos Zonal Director of Anti-rape NGO Black Diamond Support Group, told the NATIVE at the Lagos protest, further stating that “most people are even accused of not coming out immediately the incident occurs”.

A survivor doesn't owe you a "convincing story".

With no statute of limitations, rape allegations and charges after long periods are valid, but with no means to “prove” their experiences beyond their story, victims have the smallest chances of justice. A common comment detractors have been using in their argument against Busola’s allegations is that she has just shared her story two decades after the alleged incidents occurred. While this take is obviously inane and spiteful, it is sadly the type of argument that can fly, apparently, in a Nigerian court of law.

Perhaps, a good piece of news is that there are reportedly thirty other alleged victims willing to partake in a civil suit. Also, you’d expect the state to get involved considering that rape is a criminal offence, but nothing has been said by the government so far. You’d expect that over thirty victims coming out will make a difference, but in a Nigerian society that continues to remain deaf to women and atrocities against them, it is still a stretch to expect justice.

From a logical standpoint, no one is hated enough to draw false rape accusations from thirty different individuals. But Biodun Fatoyinbo has been able to garner supporters in a society where “touch not my anointed” is held in the highest of regards. One of the more disorienting highlights of the Lagos protest was seeing young people walk into COZA, heads held up high, for church service. In Abuja, videos of a counter-protest in support of Biodun made the rounds on social media, with protesters apparently promised ten thousand Naira each for their efforts.

Credited as one of the protest conveners, actor and now ex-COZA member, Akah Nnani granted an interview to press present at the protest, reiterating his desire that Biodun vacate his position as the senior pastor of COZA and separate himself from the church, until facing the allegations levelled against him in court. While Nnani later posted a memo on his social media pages on Sunday evening, indefinitely excommunicating himself from COZA, his apparent need to separate the church from the senior pastor and founding member in light of the allegations seems a bit distorted. Although, fair to say that Akah Nnani’s attempt to separate Biodun and the office of COZA (senior pastors and board members) from the COZA church itself (which, as a church, is the body of Christ’s people), there’s a tacit dissonance in indicting Biodun without taking into cognizance the role his office played in the alleged acts, as well as the high wall of defence his church has continued to serve as.

“For me, Pastor Biodun is the General overseer of COZA, so this is not just about him, the church is involved, because he abused his office”, Ugochukwu Ikeagu, a member of the Stand to End Rape Initiative (STER), explained at the Lagos protest. “Stepping down does not solve anything, it is probably the first step, but the most important thing is that he faces justice for molesting women and teenagers”, he added, highlighting the importance of the protest as an example that needs to be set for future generations to be better off.

Coza Pastor Biodun Fatoyinbo advising his church members not to fight with any of the protesters outside the church but He didn’t mention a single thing about the rape matter he is being accused of doing!! And everyone is there hailing him 🤦🏾‍♂️🤦🏾‍♂️ #stepdownpastor #COZA pic.twitter.com/WUkaiHKZko

While Ugochukwu’s sentiments concerning future generations reflect a much broader perspective, an immediate one is the fact that more people need to get involved to accelerate the pace of change. A popular strategy a lot of people—men especially—adopt in discussions about rape and other sex-related offences, is to approximate the impact of a crime by mirroring how they would react if a close friend or relative happened to be a victim. Rather insidious and dangerous, this mode of thinking needs to be eliminated, because it shouldn’t take such a complex ideal to have basic levels of empathy, and general disdain towards rape and other heinous crimes against women. Participating in any way possible should be looked on as an essential moral duty, regardless of how distant we may seem from the crime, and how little of an impact it all may seem.

It is not difficult to find Nigerians who are apprehensive of the efficacy of protests to remain passive, but it goes without saying that resignation does not trigger social change. Sitting on the fence in situations concerning a crime as grave as rape is ironic, because there is really no fence. Being silent or advocating for “the truth”, especially in light of strong, if not unimpeachable evidence, is akin to being against the cause to eradicate our society of sex-related crimes. By taking a stand and becoming irreverently loud, we reduce the chances of being ignored, and increase the chances of making our society a safer and saner place for everyone.

Per the organizers, Lagos protests will resume next Sunday at the Commonwealth Of Zion Assembly (COZA) station church, 20, Mobolaji Bank Anthony Way, Ikeja, at 8AM.

ICYMI: From the protest grounds in London: #AbujaRaidOnWomen, a photo story by Emily Nkanga

Next Article Bridging the gap between Afropop and the Caribbean sounds