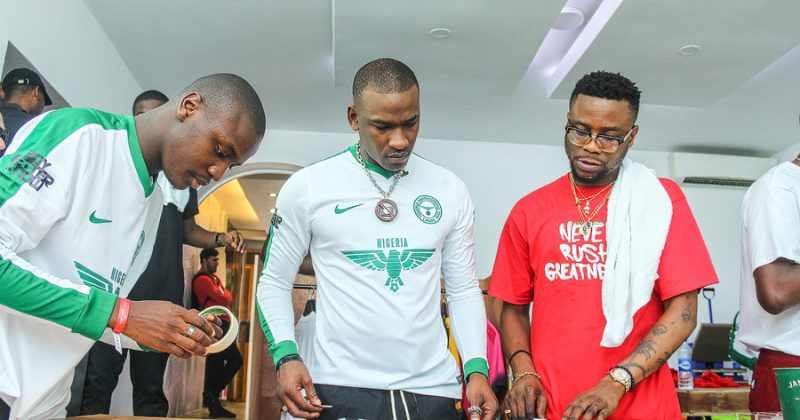 Six young Nigerians tell us why Homecoming 2018 was so important

Last weekend, Lagos was a movie, and we’ve only just about recovered. As much as that expression has been used and abused over the years, that is the only way to describe it. Linking up with BBK (helmed by Skepta and Greatness Dex), Grace Ladoja and our family at Nike, we curated a three day experience designed to further strengthen the bridge between Nigeria and the rest of the world – a bridge that The NATIVE has been committed to forging since our inception.

As the weekend was centred upon the marrying of homegrown and diaspora, it saw a two-day pop-up shop featuring international brands such as Patta and Off–White, paired with Nigerian outfits such as WAFFLESNCREAM and Vivendii. Nike set up a jersey customisation space, which saw everyone from Naomi Campbell to Odunsi The Engine to your little sister drop by over the weekend to make their 1/1 Naija-inspired jersey. We linked up with grassroots football organisation Ball Off and Nike again, to put together two football tournaments – one featuring the teams from a Lagos-based semi-pro league, and another featuring teams captained by the likes of Skepta and Not3s, with a special guest team consisting of Super Eagles legends like Taribo West and Daniel Amokachi.

The weekend’s events culminated in the Homecoming Concert, a line-up helmed by DJ Obi with no headliner – artists graced the stage one after the other performing their hit songs. Not3s and J Hus returned to Lagos to great acclaim, whilst homegrown stars such as Wizkid, Olamide and Davido did what they do best.

As the relationship between Nigeria and the diaspora grows seemingly every passing day, we spoke to six young Nigerians about why they feel Homecoming was another important step in the right direction.

Homecoming’s presence in Lagos was vigorous over the long weekend. I think the merging of the local youth presence with the international, brought a whole new spotlight to the culture in Lagos. The cultural revolution has been televised, and the drive of authentic growth is happening before our eyes at an insane rate.

In the morning, bonsoir.

It shone a light on the importance of the creative industry in Lagos and I think it has definitely helped to put the “culture” on the map. People are proper intrigued about the scene and want to see how they can be a part of it, or help it to grow. With people like Odunsi, Santi and Wavy on the bill it also showed that the new generation of unconventional artists are important. We aren’t just creating music on the internet, but we’re on significant bills like this. So it definitely was a WIN. The reviews from the show itself have been good, and the events leading up to it built a sort of community feel. A sense of community is always important.

TeeZee, Co-Founder of The NATIVE

NATIVE and Homecoming are like a match made in heaven. We set the template for how things should be done for New Gen with Nativeland, now events like that can happen every season. The voice of the youth stays relevant. It’s the bigger picture for our people. Our goals and visions are aligned.

The importance of Homecoming was the fact that everything happened here in Nigeria. It gave various creative scenes a genuine spotlight and created a feeling of real appreciation and love.

Showing off da dimples cos she say she like em 🍑🌴

NATIVELAND was the highlight of my 2017. Being able to go then back to my motherland to perform [again], it was just so sick to me. I didn’t know I had a following in Nigeria, so to be able to do what I love and see people vibing with me and to my music was just proper.

Homecoming celebrates the greatness coming out of Nigeria, making you fall in love with Nigeria over and over again.

Skepta was ordained a chief by the Baale, Chiefs of Odo Aje in Ogun state