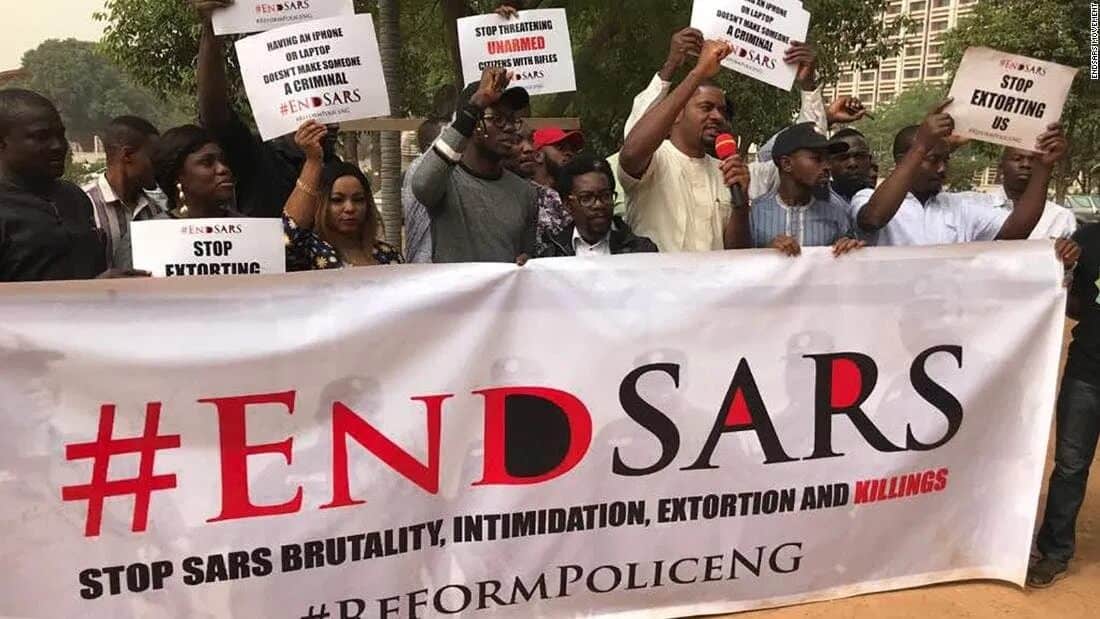 Here are ways to support #ENDSARS protestors and call for justice

The nation is banding together and flooding the streets to protest the unjust behaviour of the notorious Special Anti Robbery Squad. From Abuja to Ibadan, these demonstrations are demanding the attention of the Nigerian government to do something about the menace SARS have caused over the years.

Last weekend, graphic footage emerged, allegedly showing officers of the Special Anti-Robbery Squad (SARS) dragging two men from a hotel in Lagos and shooting one of them in the street. Shortly after, several videos showing alleged brutalities by the notoriously feared arm of the Nigerian police force emerged, which led to public outcry on social media, with revered celebrities like Wizkid, Falz, Olamide, Davido and much more adding their voices to the calls for the Federal Government to #EndSARS, outrightly.

On Sunday afternoon, the Inspector General of the Nigerian police, Mohammed Adamu, banned SARS and other tactical police units focused on armed crimes from carrying out routine patrols and other low-risk duties like. In the statement, put out by the official Twitter account of the Nigerian presidency, the IGP also listed out several conditions under which operatives of the unit must carry out action, including always appearing in tactical police gear and desisting from invading the privacy of citizens.

We’ve been down this road before. Let the president address the country on every media platform. I don’t care if he’s on wheelchair cuz this doesn’t look approved and notarised by the president.

Instead of deeming it as an actionable plan, many (rightly) called out the ban as a repetitive measure that’s been put in place several times before, and has failed to be effective on each occasion. In June 2020, Amnesty International updated their 2018 report, ‘Nigeria: Time to End Impunity’, which details the alleged torture and human rights violation by SARS, citing cases between January 2017 and May 2020. Initially created as the specialised unit to combat violent crimes like robbery and kidnappings, the police unit is now infamous amongst Nigerians as a terror squad abusing their power and indiscriminately targeting Nigerian youths.

Determined to ensure our voices are heard this time, calls to #EndSARS have remained on social media timelines throughout this week, while physical protests are currently taking place in several states across the country. For those who aren’t able to go out to the streets, other routes are available to assist in the demonstrations.

Learn about what’s going on

For those looking to learn about the protests, an End SARS carrd has been created with resources containing basic information about the police unit and the reasons its disbandment is being called for by many Nigerian youths.

For everyone going to the #EndSarsProtests , FG and the police might soon get violent so please protect yourselves! Come prepared. You can get a painters mask at artworld/tejuosho to protect yourselves from teargas. They’re not expensive. Take water, LOTS.#EndSARS #EndSarsNow !! pic.twitter.com/HQ7T7Fuqyl

With education about the issue at hand being a key first step, the next is to join in the action in whatever way possible. Just as there’s a protest in real life, there’s an online protest using the hashtag #Endsarsprotest #ENDSARS. You can also get vital information from the scenes of the protest via @fkabudu , @savvyrinu

#EndSARS
Apart from killing us, the @PoliceNG PPRO has taken to lying to international agencies in Canada that our tents has been returned.

As of 10.05am this morning, our tents have not being returned.
We were left to sleep on the bare road without protection from rain & wind pic.twitter.com/reGp4qEq1V

The aforementioned carrd also contains phone numbers and emails associated with Senators, Governors, House of Representatives members and Lagos’ Commissioner of Police, so people can send in texts and make phone calls to amplify the significance of the protests. A text message and email line has also been set in motion; all you need do is open the provided link, tap the phone number and/or email of the senator representing your constituency, and hit send to get in touch directly with your LGA Senator.

Donate to protestors and victims

To support protesters with funds for medical care, food and basic necessities, please find details below:

So @Mosopemi is making breakfast for the 50 or so protesters who are going to be in Alausa overnight. It's a small gesture, but if you'd like to help, please donate or volunteer to serve them. The cost will be 40 – 50k and you can donate to: 0120009843 GTB Mosopefoluwa Odeseye

Nigerians abroad feeling helpless because you cannot go out to protest. Here’s a way you can support the movement. @a__vanita is raising money to fuel the protesters (food, drinks, paracetamol, energizers etc)

To donate please send money to

We've raised 2m so far, and the team decided to open it up to the public.

We are 100% against all forms of violence & brutality and we need to band together to put an end to this.

You can join the donation here – https://t.co/87hm5RdsYN #EndSars

We are raising funds to support #EndSARS protests around Nigeria – to provide resources for our people on the frontline.⁰⁰Please donate using the link below:https://t.co/DAkYCvF27b

Earlier today, Feminist Coalition announced that the above link had been deactivated, therefore, can only receive direct payments into a bank account. Please find details below:

Since Friday, #EndSARS and #SARSMUSTGO have become global signifiers of the calls for the complete abolition of SARS, with many in the international community—including celebrities like Viola Davis, Trey Songz, Wale and more—amplifying the demonstrations and bringing increased attention to the situation. More than the coverage, though, we can help in ensuring there are consequences for SARS’ atrocious crimes, and the nonchalant handling of the Nigerian government in the repeated calls to end the police unit. The International Criminal Court investigates and prosecutes grave crimes which of concerns to the international community, and since the local system won’t do that, we might as well turn to the ICC. You can send an email, with credible videos and news link, to the prosecutor’s email: otp.informationdesk@icc-cpi.int. Here’s a sample, in case you’d like to copy, paste and make some changes to the email.

Let's all send emails to the International Criminal Court.

Tell them that the Nigerian government is killing and shooting on peaceful protesters, its own citizens.

Email of the Prosecutor is: otp.informationdesk@icc-cpi.int pic.twitter.com/8Rm7kE1EzE

(At the moment, more resources are being created and disseminated to cater to the #EndSARS protests. We’ll continue to update this story and share useful resources as we find them.)

Dennis is a staff writer at the NATIVE. Please share any useful resources for the #EndSARS protests with me  @dennisadepeter