Online gaming communities are a growing trend in Nigeria

Before the COVID-19 pandemic even reached us in Nigeria and forced the isolation of lockdown upon us, Nigerians were already playing video games to escape boredom. Gaming has always been a top leisure activity for me since as far back as I can remember. I was cutting classes and spending all my break money so I could play with my friends at the game mall, located suspiciously close to my secondary school in Ibadan. Sometimes, I’d even lose track of time and end up getting caught when I can’t make up an excuse for not returning home in time.

Gaming was truly my first obsession, so I wasn’t under any illusions about the risks involved with my decisions to get back into it when the lockdown started in March. Like so many other slightly uncomfortable things in my life, the decision started as a joke. ‘Wouldn’t it be funny,’ I thought to myself, ‘if I could become famous and successful for doing the one thing my parents swore was a waste of time?’ I had seen people like Ninja and Pewdiepie make millions of dollars from uploading their gameplays on YouTube, and I felt up to the challenge. But asides from the lucrative prospects, I figured it was a small, deserved protest against the stress of adulthood.

My friends and family greeted the decision with tolerant concern for the distracting effect it could have on my already busy life. However, the unruly child in me was already dreaming about leaving all that behind for the sense of control video games offer. Who could resist, given the uncertainty of our current reality? Sadly, the cost for the new PlayStation was over my budget so I settled for a PC controller that allowed me to turn my workstation into a game-station. For others, the cost was less of a challenge; between the 16th to the 22nd of March last year a total of 4.3 million new games were sold worldwide, as reported by the Statista Research Department. 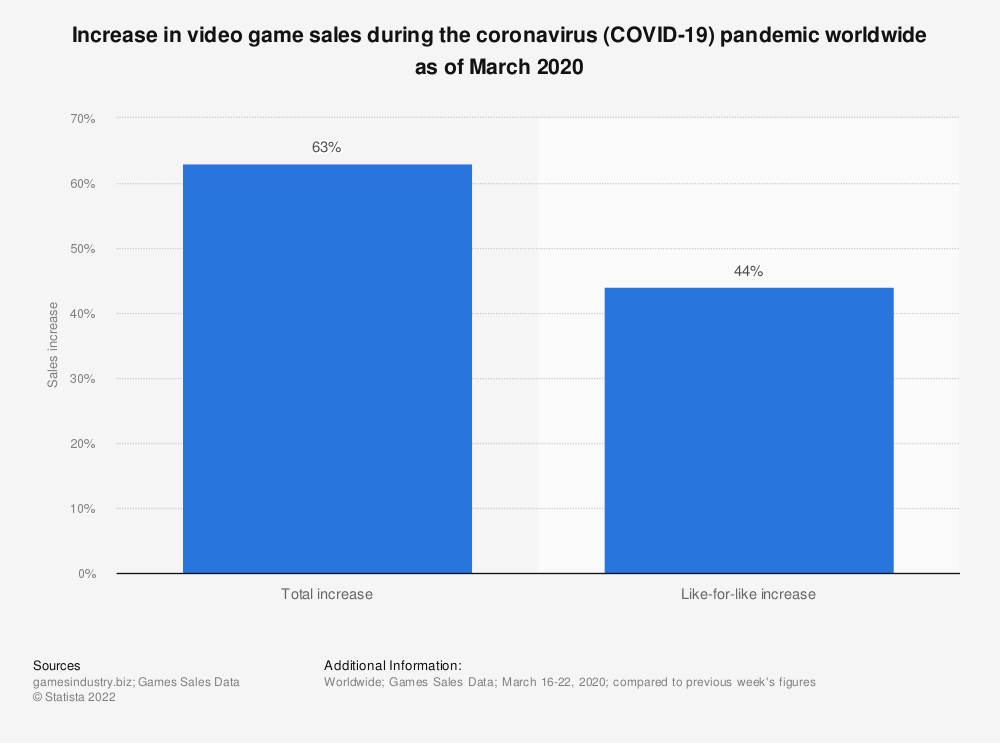 Initially, I limited myself to a few hours of FIFA or GTA every week, and it seemed like a habit that could easily be checked. However, once I got over the nostalgia of driving through the chaotic streets of Los Santos, I decided to explore the latest gaming trend for playing online. It didn’t take long to realise that I was getting addicted to it as the data subscription that usually lasts me the whole month finished within just over a week of playing PlayersUnknown Battleground (PUBG), an online battle royale game that puts different online players on the same battlefield. I noticed myself go from part-time gamer to hardened enthusiast with each round I won alongside my team of strangers-turned-comrades.

While the pandemic made the physical spaces that facilitate social interactions off-limits, online gaming now gave me a way to not only virtually connect with friends but also seek community and forge new friendships amid the prolonged isolation. I got more excited whenever I found myself in the same lobbies or tournaments as other Nigerians or Africans. The intensity of these online battles put me on the edge of my seat. It wasn’t long before I got into online gaming on my mobile device, after a friend I made during one of my Battle Royale tournaments advised me to download the mobile version so that I could play on the go. Plus it’s also well suited for Nigeria where electricity can be a problem with playing on a console.

Online multiplayer gaming took the goal-oriented single-player gaming experience I was used to to a new level, with the knowledge that I’m now competing against my peers and winning with real-life teammates. The allure is undeniable and nowadays most games have an online component that often supersedes the importance of the game’s offline objectives. In fact, most people would rather play online campaigns than finish the missions.

“I’ve never gotten to the end of any COD game but I’m already on the second-highest rank, Master”

25-year-old visual artist, Tobi tells me as he explained that he’s motivated by his friends and teammates to play every day. “The game is fun but it’s also tough and they help me to keep pushing myself ’cause you need to play every day to move to the next rank.”

The virtual connection that’s made possible by the internet allows players to link up digitally while abiding by social distancing rules. Online forums, such as Discord, offer free voice and chats for gaming communities and because it’s compatible with multiple operating systems (Windows, macOS, Android, iOS, web browsers), it accommodates all online gaming communities, enabling gamers to communicate in real-time while playing. The likes of Discord make it easy to play with friends in other cities or time zones and still feel like you’re in the same place.

The gaming communities built on these platforms also correct the impression that gamers are all loners, as many of us have formed lasting relationships with people we’d never have even met if it weren’t for the pandemic forcing us to get into online gaming. “The pandemic made me play more than I used to. Online gaming became the easiest way to connect with my buds and meet new people,” Rock, a student of the University of Ibadan told me. “I probably played like 18 hours a day.”

For SirBastien, he got into online gaming after his brother asking him to download COD Mobile. After posting screenshots of his games on social media, he became popular in school and attained more friends – simply through gaming. “I started speaking with people in school that I never spoke to before,” he said. “With that, I started hanging with them and we became really close friends. Even when you’re fighting and shooting in the game, you’re also casually gisting. So it’s a fun way to keep up with your friends while playing.” Online gaming has also helped SirBastien maintain his long distance relationships. He says,

“My brother, he lives in Belgium so I can’t play with him physically so every evening we play FIFA online together and play together against others. It’s a really good bonding exercise.”

Alao Dolapo, an engineer based in Abeokuta was also able to forge digital friendships from online gaming. In fact, he speaks of the online gaming community as though it saved his life. “Online video gaming was my coping mechanism when my dad got sick with cancer. I used to just ghost chats and all my friends had issues with me till a friend, Rock introduced me to Modern Combat Versus. There was a group of four of us (we called ourselves Ambu, short for ambush) and we beat pro-teams from all over the world together.”

“I remember those days of playing COD as good bonding moments for us. We’d talk during the games and bant and confide in each other, make fun of each other. It helped me come out of my shell in terms of being sociable. It was very depressing for me to see my dad on what would eventually be his death bed, but being online, playing games was my escape.” Dolapo divulges. As a team, are Ambu a not only gaming specialists, but a fruitful support system, that have opened up their gaming safe space to virtual friends all across the world, Dolapo describes. “We eventually started to grow more international and had to form a WhatsApp group. There were guys from Netherlands, UK and South Africa. Cassa from South Africa would confide in me and tell me about how his stepdad was cheating on his mom. We all just really bonded from gaming and could share about stuff that was bordering us and we were there for each other.”

With the issues of unstable power supply in Nigerian, it’s lucky that we have smartphone technology to allow us to play games, such as the online multiplayer games like COD and PUBG, without getting interrupted by NEPA. Mobile gaming has drastically widened the demography for gaming and allows more people to participate in online multiplayer games. According to SirBastein, “most of the time, you tend to play against people that aren’t Nigerian. But I’ve noticed there are lots of online gaming communities for mobile in Nigeria. They tend to have online console competitions too, but if you compare the numbers, you’d see that there aren’t as many. I had a tournament recently and I had to register in the Discord link and the mobile Discord had about 400 people registered to play while the War Zone for the console was just 33 people.”

Even those who don’t exactly play video games aren’t excluded from the growing community of online gaming thanks to blogging platforms like YouTube, Reddit and the recent stock listed Gamespot. I, not too long ago, had the chance to speak with Johnny Drille, who explained that he’s a big fan of watching gaming streams on YouTube. “That’s my biggest addiction right now,” he said. “My favourite streamers are Jackfrags and theRadBrad. It’s just fun to watch people play games. It’s very hard for me to just see my food and just eat it. It’s boring. I only enjoy meals when I’m watching something, so I watch gamers playing and talking about the games.” These platforms come in different shapes and sizes, all exploring their varying niches of gaming. While some are focused on reviewing games, others give news or guides. Many have different facets and discussion threads for every gaming topic you could want and they are often filled with other gamers who also want to connect and dive in while playing at home.

However, not everyone is pleased about the growing online community of Nigerian gamers. “Well I’m more of a lone-wolf,” Rock explained to me. “I have my own gaming squad but the times that I joined bigger communities, they seemed like a bunch of ‘tryhards’ to me. They were trying to compete in tournaments with Europeans when their network is way better than ours. They sucked the fun out of the games with their schedules and routines but that’s just one or two out of many gaming communities I’ve encountered. I’d rather just play with my squad.” Rock’s reservation from exploring other online communities emphasises how the success of online gaming communities is hinged on members sharing interests, goals, and norms that unite them. This is further proof that the community of online gamERS in Nigeria is growing, because, even when we do share a similar love for gaming online, it would be ridiculous to imagine that all Nigerians would be like-minded.

DISNEY PLUS IS SET TO LAUNCH SCI-FI SERIES SET IN LAGOS, IWAJU