Life in Quarantine: Here’s how Lady Donli is spending her days indoors in Toronto

Addicted to cash in Toronto

Life in Quarantine is a new bi-weekly column we will be running to give African artists quarantining in different countries from their home country the audience to speak on their current creative processes during the current global pandemic. We take a look into their daily routines and find out how they are fairing being away from their family and friends with no end in sight, yet. To start off the series, we caught up with Enjoy Your Life president, Lady Donli in Canada.

There is no denying that afropop is getting it’s long overdue golden moment, and we’re witnessing a dominant line of new-age at the forefront, taking our music all over the world. The undeniable allure of afropop has lead to many artists from these parts taking on international shows as seen from Santi’s performance at Tyler the Creator’s Camp Flog Gnaw last year to Rema’s string of live shows in the US.

This is what led Lady Donli to North America for a scheduled tour in different states including New York. She was set to fly back from the States to Lagos, but was unable to make it before the government restricted flying and movement, thanks to Miss Rona. Now in Toronto, Lady Donli is trying to take it one day at a time, and is spending most of her days practising the guitar and getting fed up with her male housemates.

Last week, she held an interesting at home concert for her fans, and following that we spoke to the singer about how she’s finding isolation and how she’s coping with the pandemic.

On how she got stuck in Toronto

DONLI: I was on a little North American tour, and I was meant to have a show in New York but my show was cancelled because of the pandemic. I had to take a flight back to Toronto and plan my route from there (Toronto is usually my base when I’m in North America). However, at this time flight prices at the time were so steep so it was literally impossible.

Then I just woke up one morning and they were like borders are closing in Nigeria, and Toronto also closed its borders so I was like oh shit! This was all around the end of March, and I couldn’t get a connecting flight because flying from Canada means I have to transit somewhere so I either had to go to London or New York, and it just didn’t make sense to double my risk.

So I had little choice but to stay here and see how everything plays out. Literally my mantra now is just one day at a time, cause my days are all the same now, they all feel the same. There’s nothing else that can be done, like I’m here and I just have to make the most of it. Being away from my family is hard, this would have been a good period to bond cause I’m never at home ever but we’re here so it is what it is.

On how she’s finding it

Donli: I’m with my manager basically so it’s not too bad. But it’s so cold, the weather here sucks and I am tired of being around men – I’m with my manger and his housemate and they’re both men. On the bright side, I have time to practice the guitar and I’m exercising more and just doing things more consistently that I wouldn’t do if I was in Lagos/Abuja.

DONLI: I mean people still move about here, the lockdown is actually not that strict, but compared to how Toronto usually is, this is a ghost town. Minus essential stores, all other places are still very much closed, you have to line up to enter grocery stores one-at-a-time. No one’s outside really, and the weather is shit as well so that also contributes. It’s not as strict in the Ontario area, but in other provinces there are way more cases so the social distancing requirements there are stricter. I hear from May they might relax the lockdown a bit over here. 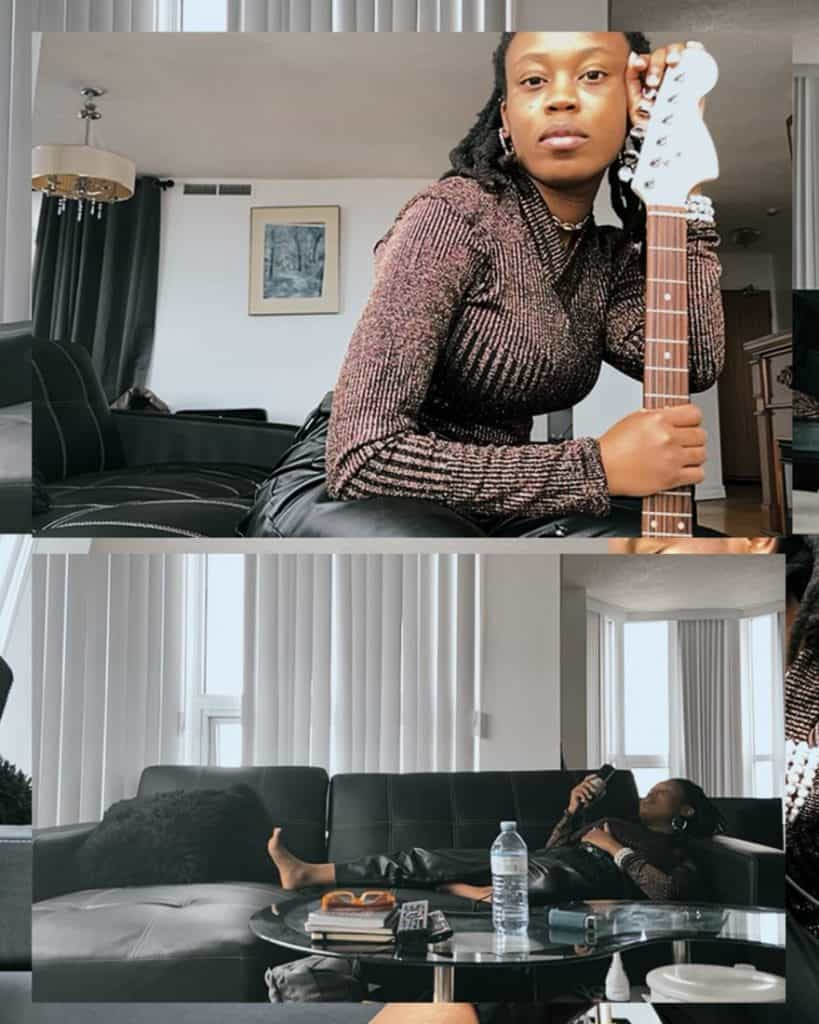 On making new music in isolation

DONLI: Okay so basically my laptop crashed, so that has kind of thrown a huge spanner in the works of my creativity. I’m currently trying to get a new one next week, and so I have not really been recording anything. I have been writing a little bit as I’m practising the guitar, but I have kind of paused on actually creating music and I don’t mind cause a break is needed. I wake up, meditate, make breakfast, practice, practice, practice, exercise, shower, and sleep. Like every day I have the same routine.

On her upcoming single, “Wonda Wonda”

Donli: I made “Wonda Wonda” in November of 2019 in Lagos. I was meant to drop it in like February, but like the dates kept getting pushed back by reasons beyond me. I actually wanted to shoot a video, we had even done the treatment and everything was set to be shot in April, which is when I was originally slated to return to Lagos, but obviously that didn’t happen. Right now, there’s so much uncertainty on whether I will ever get to shoot a video or when all this COVID-sh*t will end so yeah I was just like let’s drop it now cause it’s been ready and people want to listen to it.

On when she wants this all to end

DONLI: I really don’t know when all this will end but I am hoping to come back home in  like July. There’s barely any flights, and I definitely don’t want to transit in any country with really high numbers cause of the risk. April ended, thank God, and very soon May will as well. I’m just hoping that by June, I can go home but I’m not trying to be too hopeful.

ICYMI: The day before the rage with Santi