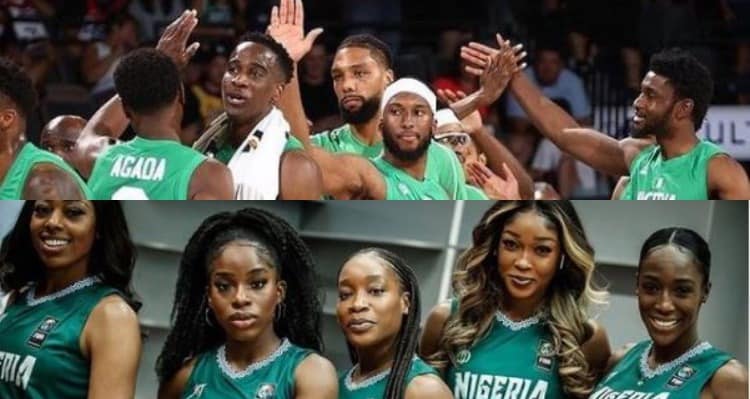 The 32nd Summer Olympic Games are around the corner. Currently scheduled to take place from July 23 to August 8, Nigeria’s men and women basketball teams will be the only African representative in the upcoming games. This is further confirmation of the country’s dominance on the continent, however, it has yet to grow into a proper global contender on the international stage.

This year’s Olympics is perhaps the best chance for Nigeria’s basketball teams to upgrade its status, and perhaps achieve feats that no African country has at the Olympics: advance past the preliminary stage and make it to the medal podium. The men’s team, D’Tigers, have been pulling a lot of support over the last week, following their win over the USA men’s team on Saturday, July 10.

In their first exhibition game ahead of the Olympics, D’Tigers pulled off a shocking and invigorating 90-87 win over the US. This made them the first African basketball team to win against the USA since NBA players became eligible for national team duties. During the game, D’Tigers lead for significant parts of the first half’s twenty minutes proving to be a stern test down the stretch. They eventually landed the win on the back of twenty made 3-pointers scoring twice as many as Team USA. They did this on around 50% shooting, and a tough defensive effort epitomised by Precious Achiuwa’s jaw-dropping block on Kevin Durant.

Achiuwa, drafted by the Miami Heat, is one of eight active NBA players on the 15-man provisional roster announced by the Nigerian Basketball Federation (NBBF) last week. It represents the amount of Nigerian-related talent on rosters across the most prestigious basketball league in the world. “There are more players of Nigerian descent in the NBA than probably any country besides the U.S…the talent is there,” D’Tigers head coach Mike Brown recently told The Undefeated. The other seven NBA players are Chimezie Metu (Sacramento Kings), Miye Oni (Utah Jazz), Jordan Nwora (Milwaukee Bucks), Gabe Vince (Miami Heat), Josh Okogie (Minnesota Timberwolves), Jahlil Okafor (Detroit Pistons), and KZ Okpala (Miami Heat). Additionally, Michael Gbinije and Ekpe Udoh have NBA experience, and Brown himself is a veteran coach in the NBA.

In addition, they are professionals playing in leagues around the world. Including Europe especially where Nigerian players make for a stacked roster that will be pruned to a final twelve players for the Olympics. The game against the USA is amongst final preparations by Mike Brown and his coaching staff to assess their wealth of options, make final decisions, and fine-tune the team ahead of the game.

The additional boost came in the form of a blowout 94-71 win against Argentina’s basketball team on Monday night. In their dominant win against the fourth-ranked team in the world, D’Tigers were far less efficient from the 3-point line, but they made up for that by creating high-quality shots in and around the paint while continuing their strong defensive efforts to limit Argentina to a paltry 35.9% shooting from the field.

In its final game at the four-team round-robin exhibition games, held at the Michelob Ultra arena in Las Vegas, D’Tigers eulogised Sound Sultan, the Nigerian musician who recently passed due to throat cancer and was a Nigerian basketball advocate during his life. On Tuesday night, however, the team were on the receiving end of a blowout, losing 108-69 against the Australian Basketball team. Having beaten both the Argentina and USA teams in convincing fashion, the Boomers made slight work of the Nigerian team even though it rested four of its five regular starting superstars.

The second-string team was defensively dominant, holding D’Tigers to just 29 points by halftime and keeping the same energy in the third quarter to ensure the game’s outcome was pretty much sealed by the beginning of the final 10-minute quarter. Against Australia, D’Tigers were outplayed on both sides of the floor, struggling to create and knock down quality looks both from beyond the arc and in the paint area. They were a step behind defending a Boomers team that relied on blistering ball movement and great screens, with the team’s constant decision not to switch on ball screens allowing Australia to wreak havoc from behind the arc, led by Chris Goulding who scored 21 points and was a perfect 7-of-7 from 3-point.

Interestingly, D’Tigers will open their Olympics campaign against Australia, in a Group B match-up on July 25. They will also face Germany and Italy in their historic bid to make it out of the group phase. Considering their preceding two wins, the general feeling is that the blowout loss is only a bump in the road, and the team is expected to put up a good showing.

In the same vein, Nigeria’s women’s basketball team is also gearing up to compete at the Olympics. Similar to their male counterparts, the D’Tigress roster is packed with Nigerian-American talent, many of whom are current professionals in the WNBA and all of whom have played at the U.S collegiate level. This weekend, the team will be playing an exhibition game against Team USA, a high-level test against a country that has won the basketball gold medal at the last six Olympics.

Following the men’s team wins, it became public knowledge that both basketball teams weren’t receiving financial support from the Nigerian government, despite these players doing their best to represent the country. It was also revealed that the NBBF was begging for the Nigerian customs to clear its Olympic kits, donated by Peak Milk. After complaints from Nigerians, the government hasn’t really budged, with the minister of youth and sports Dare Oni asking corporate bodies to adopt the teams through sponsorship. Thankfully, the request is being heeded, with three commercial banks donating a combined $200, 000, to be evenly split between both teams.

That amount is still far off from the million-dollar target speculated to be needed for the team’s competitive participation at the Tokyo Olympics, but the signs are positive. Earlier this week, Fintech unicorn Flutterwave announced that it would be partnering with D’Tigers, through an agreement with Friends of Nigerian Basketball (FONB). In addition to the sponsorship agreement, the platform will be the exclusive payment partner of D’Tigers, giving fans seamless access to donate and shop the team’s latest merchandise. It’s an extension of Flutterwave’s growing interest in fostering African unity through sports, especially basketball, following its recent collaboration with the Basketball Africa League (BAL) during its maiden edition.

At this juncture, be it financial or moral cheerleading, D’Tigers and D’Tigress need—and deserve—the support of Nigerians at home and in the diaspora as they aim for a worthwhile outing at the Olympics. We’ll certainly be rooting for them.

ICYMI: DJ Poizon Ivy on her time as Music Coordinator for the 2021 Basketball Africa League