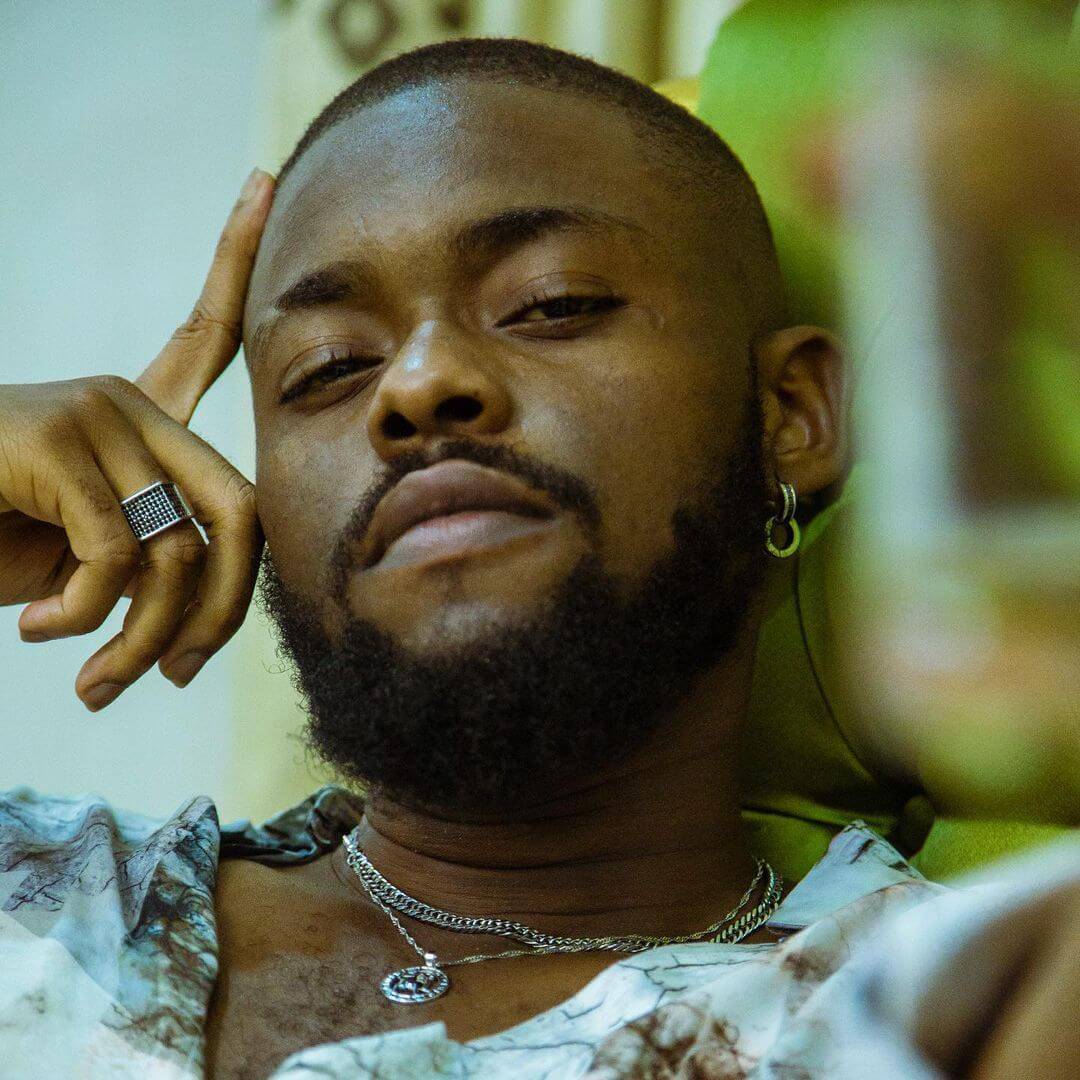 NATIVE Exclusive: Lojay’s commitment to artistic growth is paying off

The night after the release of his new collaborative EP with Sarz, emerging Afropop star Lojay went to the club to find people deeply enamoured by the project’s Amapiano-infused closer. “I wish I filmed the reaction because people were screaming “Monalisa” and I’m thinking, ‘Didn’t this just drop last night?’” he recalls over a Zoom call, one week after release. It’s reflective of the rapt reception LV N ATTN was instantly met with, and it’s much deserved.

The 5-track tape is an excellent merger of Lojay’s gliding vocals, emotive lyricism and bright melodic choices, with Sarz’s proven ability to create eclectic and deeply engrossing soundscapes. Being the second artist to work with the Afropop production maestro, Lojay earns his breakout moment with effortless command, a benchmark performance fitting for his introduction to a wide audience. In 2017, he dropped his first EP, Midnight Vibes, a curious collection of his raw and promising abilities as a singer and songwriter. Upon graduating from Uni in 2018, he decided to go all in on making music, and that meant a strong commitment to refining his craft.

“I never really wanted to “blow,” I just wanted to develop my artistry and I believed everything would fall in place and well,” Lojay says of the period between making that decision and now. “I believe the growth is quite evident now.” Linking up with Sarz during the early days of the Coronavirus pandemic, Lojay wasn’t really in the best space, but the producer’s instant rapport and willingness to work on an EP was vindication for the time spent at becoming a better version of his musical self. The project’s only vocal feature comes in the form of a stellar Wizkid feature, another huge co-sign of his talents.

“I’ve just been absorbing everything that’s happening and working on taking in everything that’s yet to come,” Lojay says of the reception to LV N ATTN, noting that he’s been swamped with joy, excitement and, most of all, relief since its release. There are no plans to step back anytime soon, “I want to be able to make this level of music consciously for the next 10-15 years,” he tells The NATIVE. It’s Lojay’s time and the clock will be ticking for a really long time.

Our conversation with Lojay follows below, and it has been lightly edited for clarity.

Lojay: Lojay is Lojay. The person I am within the music is the person I am outside. My whole life revolves around music, so there’s no possible way to talk about Lojay outside music. That’s literally me. Lojay means Lekan Osifeso Jnr. and that’s my actual name

What’s the growth between your debut EP, Midnight Vibes, and now been like?

To be honest, there’s been a massive amount of growth which I would say is very intentional. Going through my catalogue, you’ll notice the growth in the music. Every new song is better than the last and that was an intentional thing for me. Concerning Midnight Vibes, I had recorded a couple of songs and instead of putting out one song, I just decided to put out a couple so people could, you know, vibe and that was the major intention behind the EP. I was in Uni so I wasn’t really focusing on music at the time, but when I was done around 2018 and I started to drop songs like “Ariel” and “Ogogoro,” it was then my sound really started to take shape. At that point, I had left uni and gotten back to Nigeria, I had to figure out what I really wanted to do. I only had one thing on my mind, It’s what I’d been preparing myself for 2 years prior to that time and, well, I’ll say there’s been a massive amount of growth and I feel very blessed. I never really wanted to “blow,” I just wanted to develop my artistry and I believed everything would fall in place and well, I believe the growth is quite evident now.

How did you meet Sarz?

This was the beginning of the Lockdown in Lagos. I wasn’t in the best of spaces because music wasn’t really going the way I had intended for it to go. So in my bad space, I reached out to my lawyer just to let him where I was at the time, and my lawyer said, “I could hook you up with Sarz, what do you think?” And I’m like, “What do you mean what do I think?” So I went ahead to work on some demos and sent that out. In my mind I’m thinking Sarz would want to work on one song but to my surprise he says we should work on an EP and at that point, I knew this wasn’t a mistake and I was doing something right. Like, if Sarz could see that, to the point where he wants to work on an entire EP, then there had to be something. I had already been confident but there was just this reinforcement that came with him just saying, “Let’s work on an EP.”

Sarz has worked with some of the biggest names in Afropop today. What was putting the project together like, especially with someone of his calibre?

I know you might be expecting to hear something serious but it was mad fun. There was no forced energy, no pressure, the chemistry was there and it was just so much fun. We just camped in the house and listened to beats, we vibed, we laughed and we were just having a good time making music. This entire process made me understand the importance of keeping it seamless and just enjoying your process, rather than pressuring yourself to make a certain type of music; enjoy yourself and let the music make itself.

Was there any sort of self-pressure to make a ‘hit’?

Not at all. You can’t make a hit song, you can only make a great song. The acceptance determines whether it’s going to be a hit or not. If I was trying to make a hit, I don’t think I would have even thought about making “Tonongo.” It was never about making a hit song, it was always about expressing myself on a song and making it undeniable.

You mentioned recently that you don’t write, you allow yourself to feel the music then you take it from there.

That’s literally it, I always have to feel the music. Music is spiritual. It’s a feeling thing, not just a hearing thing.  On hearing a beat, I already know what I want to say within the first 5 seconds. In the space of 5 seconds, I know how the beat is making me feel, I know what I want to talk about and I just basically express myself then fill in the gaps properly after. I’ve realized that if I sit down to write, it doesn’t feel natural, it just feels like I’m reading a script and that just doesn’t work for me. By the time I’m even done writing, I most likely am not in that space anymore. So basically, I hear the beat, I feel inspired and I just start talking. A perfect example is the first verse of “Monalisa” because that just came out.

What’s your favourite song off the tape?

That’s like asking me about my favourite child. I honestly have no favourite because I love everything. Every song takes me to a different space, so I won’t say one is better than the other, I’d just say they all represent very different things and they all have their own essence.

What would you say has been the most challenging part of working on this collaborative project?

The most challenging thing about this project was conscious development. The major aim for me with this EP was to grow, and you can’t count it as growth if you’re not conscious of the things that are happening. I needed to be aware of the changes that were causing growth and to be aware of how to maintain these things. I want to be able to make this level of music consciously for the next 10-15 years. Making the music wasn’t hard, but making it intentionally was a different ball game. That was the most important thing for me as well as the most challenging.

Let’s talk about the Wizkid feature “Lv n Attn.”  There’s a viral video of you in utter shock and disbelief when you heard that verse, how did that verse come about?

I had recorded “Lv n Attn” in Lagos a while back before anything. We went to London and we had been doing some work. So I’m guessing Sarz on his own had gone to see Wizkid and played the song for him alongside a bunch of other songs and, apparently, Wizkid loved the song from the jump. Some random morning, I was at the studio and at about 2am, I got a text from Sarz asking where I was and if I could make it to another studio at that time, I had a feeling it might have been to meet Wizkid but I didn’t want to get too excited just in case it wasn’t that. On getting to the studio, it was some sort of studio in a studio thing. I walked into the room and I heard this laugh, I saw Wizkid facing the control board, he turned around and the first thing he said to me was, “I’m a big fan.” and I was so shocked. He asked the engineer to play the record and the record just kept on playing over and over. He said he liked the song and he’d like to drop a verse on it if I was okay with that and, of course, I didn’t mind.

A week passed and nothing, two, three weeks passed and nothing still. At this time, we were getting ready to go back to Lagos and Sarz said he hadn’t heard back from Wizkid so I didn’t really mind just finishing up the song myself. Sarz had thrown me off balance with what he had said, then went ahead to play the song and my reaction in that video was exactly what I felt. To say the least, I was shocked. In that moment, I thought about what that meant and because Wizkid is someone I had always looked up to, just getting him on my first official tape, him dropping the kind of verse he dropped and him just showing the kind of support he has shown is nothing but a blessing.

How has the general reception been to the EP, and did you have any sort of fear of unacceptance of the music?

Mad! That’s the simple answer. The reception has been crazy to say the least. The project was released on Friday and we went to the club that night and the night after, I wish I could film the reaction because people were screaming “Monalisa” and I’m thinking, “Didn’t this just drop last night?” That was when I knew this one was about to be very special. And No, there was fear of unacceptance. I knew what I had created and I was quite confident.

What’s the most valuable thing you’ve picked from working with Sarz?

Intention. That was the best and most important advice I really got from him. It was a conversation we had had very early and it was one of those conversations you have and after that, you don’t really need to talk too much anymore. One of the best things about working with Sarz is the creative freedom, he allows you to do your thing.

ESSENTIALS: SARZ & WURLD ARE A STUNNING MATCH ON ‘I LOVE GIRLS WITH TROBUL’