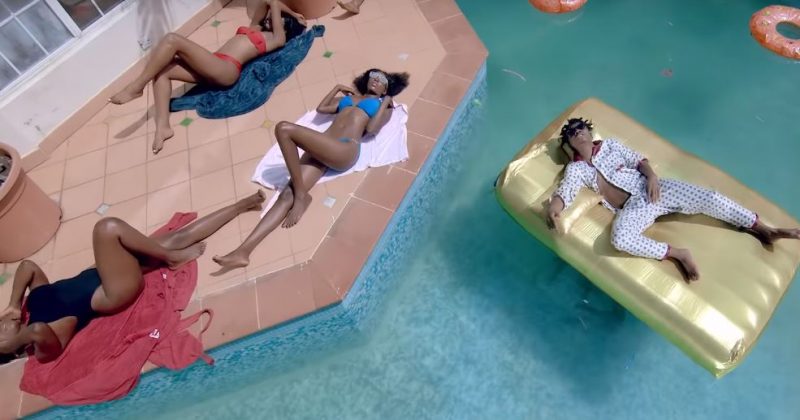 Mayorkun has always been Afropop’s odd but not so oddball. Since his debut single “Eleko” where a mix of Fuji-pop meets Yoruba-folk, he has always managed to mix familiar conventions with a unique twist that reflects his often sardonic sense of humour. On “Blow The Whistle” a pulsating electronic Afropop collaboration with DJ Consequence, he meta-referenced Nigeria’s on-going anti-corruption war, with a mirror cast against everyday interactions.

His latest video “Fantasy” also appears out the same vague obscurity of how things work in Mayorkun’s head. An opening sequence with Mayorkun durag-on, and working hard at a pool cleaning job as hot models are introduced into the scene, is the not the first intriguing thing about this scene; it’s the reverb of Olu Maintain’s controversial hit “Yahooze” playing through Mayorkun’s headphones.

Olu Maintain himself cameos in “Fantasy”, but the reason for his presence could be both a homage to the refrain “awon k on” (‘some people’) borrowed directly from the Afropop veteran’s old hit, or a remark of how in touch Mayorkun is, with his musical roots. Especially since these scenes are directed dutifully by Clarence Peters, so it almost feels like a hip-hop cliche when the token cameos reel in.

Only the man behind the art can tell for sure what “Fantasy” means but things sure got provocative after pool guy Mayorkun wakes up in a bed filled with dollars and hot models. It’s a strong imagery for how lives can supposedly change overnight in a country where nothing comes easy (or so to speak). Mayorkun is in touch with something, it may not look like much, but its enough truth to see the lines between reality and “Fantasy”

See for yourself here:

Next Article Jamal Swiss and Mich Straaw team up for a romantic new song, “Jam”