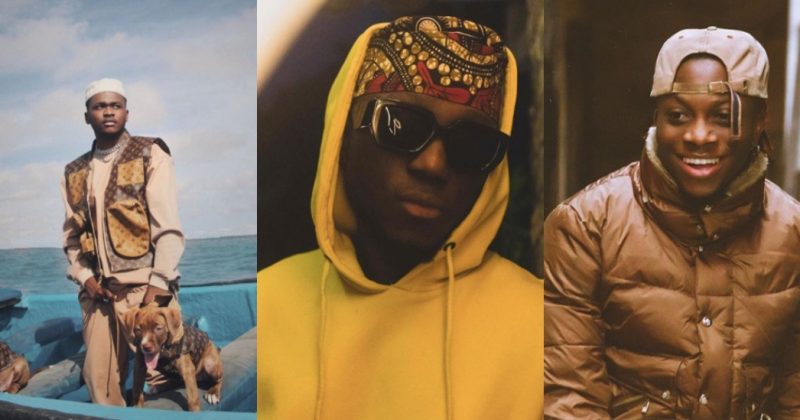 With most of the world self-isolating to flatten the COVID-19 curve, music is one of the things that has kept our spirits up and sustain our sense of community. Artists from all around the world have continued to put out new music from quarantine and their relatable subject matters help us relive past experiences, dream of a better future, or just enjoy the present moment. Because we know the volume can be overwhelming sometimes, we’re saving you the stress of scouting by sharing our selection of latest releases that reflect the liberal and diverse state of African music today.

Dj Spinall has just released his first single of the year, “Pressure” an uptempo groovy bop featuring Dice Ailes. Over the pounding afropop drums and vivid percussion patterns, Dice Ailes sings about the weight of the pressure he feels from all areas of his celebrity life. ‘This kind pressure man dey face, scatter my eyes/it’s very mighty o, e do me strong thing’ he sings over the infectious hook, musing over the struggles it takes to find your feet in this world. Although we never find out if the pressure is alleviated, the groovy upbeat number is sure to catch on quickly and get you on your feet.

Jesse Jagz is back and he’s already giving us a new project, titled ‘Garba’ due to be released on the 29th. After a long hiatus, he’s back to rapping and talking his shit in his music, and is showing this off with his new single “B”, where he muses about lost love and past times. ‘I’m back at it now my approach is pragmatic/ain’t nothing last forever, all plastic and leather’ he raps self-confidently, coming at all his past lovers for walking out when they had a good thing. We’re glad to have Jargo back.

Praiz is back with his first single of the year, the romantic and sensual bop “Like It” which features Ice Prince. Over the mellow guitar-led self-produced beat, he sings about the desire he feels for a love interest and is unafraid to let her know what he wants to do with her. Ice Prince joins him on the second verse, rapping: ‘I’m addicted to your anatomy/the reason I studied monogamy’ offering more praises for his love interest, as both men drive home their explicit sexual desires.

While Wayne is more popularly known for his work as a DJ, to start off the year he’s released his debut single “Vacancy” featuring Oxlade. Over the mellow drum-led beat produced by Adey, Oxlade sings about the longing he feels for a love interest. ‘Make you no go follow another man who no dey for you/Girl please let me know if you dey for me’ he sings over the hook, making sure to tie up all loose ends with his love interest. Oxlade maintains his usual lover boy form, wishing to commit exclusively to her and doesn’t want anyone else in the picture.

Lagos-based artist, Tim Lyre is back with a 3-pack EP titled ‘Senpai’ on which he shows off more of his stellar songwriting chops and ability to glide seamlessly on the beat. He gets help from close friends and collaborations, MOJO, AYLØ, PrettyBoy D-O and producer, DaRe for the new project and each artist delivers in their own way.

On standout track “Shank”, we see all three artists trade bars about getting their shit popping. ‘Now they know that I’m a beast in the streets and I’ve got to eat/I’ve been planting seeds, growing trees’ raps Tim Lyre on the song’s first verse, showing off his stellar penmanship and having fun over the mellow eerie beat. He’s also joined by AYLØ’s rapid-fire hook and D-O’s braggadocious and cut-throat raps allowing each artist enough time to hone in their sound and increase their individual reach.

US-based afropop artist, Chimzy is back with a new singled titled “Ijoya” featuring Apex Village’s formidable rapper, Psycho YP. The song is an ode to Weird MC’s hit single “Ijoya” which was a mainstay at class parties back in the days. The two artists bring their own unique spin to the song, with Chimzy trying to gain the attention of a love interest. ‘I was drowning, a nigga couldn’t breathe/but I told myself forget about power, focus on wealth’ raps Psycho YP on the song’s second verse, as he gives us a glimpse into his grind-focused lifestyle where he’s no longer paying attention to the naysayers, but on making shit happen with the team.

Ghana-based artist, Jean Feier is back with a new single “Notorious”, a swift follow up to her last release “Here with Me”. The bedroom pop singer is back with another romantic lo-fi production, on which she sings directly to a lover who she’s waiting patiently to return to her. ‘Look at what I made with the pain/But when it comes to you I’m a fool’ she sings, letting her lover know she’s going to ride or die for them and will always be there despite their complicated past.